The Lola T220, and its evolution, the Lola T222, are Group 7 sports prototype race cars, designed, developed, and built by the British manufacturer and constructor Lola, to compete in the Can-Am championship from the 1971 season. It also took part in the European Interserie championship. [3] [4]

The T222s were all powered by a naturally aspirated Chevrolet V8 but in different displacements. The individual specimens underwent changes in displacement in their competitive life. The engine was a Chevrolet V8. Centrally mounted, it operated a 5-speed Hewland MK6 manual transmission. Traction was rear. The chassis was an aluminum monocoque and the fiberglass bodywork was. The T220 shared the chassis with the Lola T222. Damaged T220s were often repaired with pieces of T222. [5] [6]

Among the best results was a third place at the Hockenheimring, in the third round of the 1971 Interserie championship. T222 chassis number # HU04 was driven by Vic Elford, who finished behind Leo Kinnunen, second in the Porsche 917 Spyder and Derek Bell, first in McLaren M8E. At the next round of the Interserie, the Norisring 200 Miglia, the same T222 again obtained third place. This time under the command of Jo Bonnier, who came behind Peter Gethin, second, and Chris Craft, first, both in McLaren M8E. [7] [8] [9] 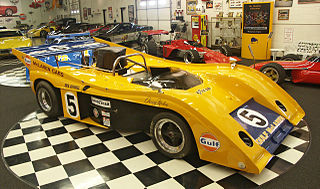 The McLaren M20 was a sports prototype developed by McLaren for the 1972 season of the Canadian-American Challenge Cup. It served as a replacement for the team's M8Fs, but it later became the final Can-Am design created by McLaren before the team left the series after failing to secure the 1972 championship title. M20s continued to be entered by private teams until the Can-Am championship was canceled at the conclusion of the 1974 season. McLaren driver Denny Hulme won two races during the 1972 season while Scooter Patrick won a single event in 1974 with a privately entered M20.

The McLaren M18 is an open-wheel Formula 5000 racing car designed and made by McLaren in 1971. 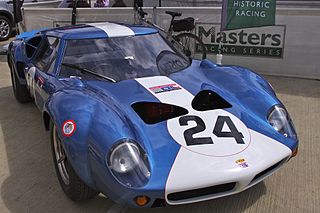 The Lola Mk6 GT was a racing car with a production run of only three units, built between 1962 and 1963 by British car manufacturer Lola Cars. With its 289 cu in (4.74 L) Ford V8 engine, the Mk6 GT was the first mid-mounted, high displacement V8-powered Grand Touring car, a chassis arrangement that had been used, up until that time, only on formula cars and smaller, more affordable GTs.

The Lola T100 is a Formula 2 single-seater entered by German BMW team for the 1967 German Grand Prix, the seventh round of the 1967 Formula One World Championship. Designed by British manufacturer Lola Cars, led by engineer Eric Broadley, the T100 was raced by Britons David Hobbs and Brian Redman. A version adapted to the technical regulations of Formula 1 was also driven by German Hubert Hahne.

The Ford Indy V8 engine is a naturally-aspirated, pushrod, V-8, Indy car racing engine, intitally specially designed by Ford for use by Team Lotus, to compete in the Indianapolis 500; from 1963 to 1967. This is the engine that gave Jim Clark the victory in 1965 with his Lotus 38 chassis, Graham Hill victory in 1966 with his Lola T90 chassis, and A. J. Foyt the win at Indianapolis in 1967, in his Coyote 67 chassis.

The Lola T333CS was a race car designed and built by Lola Cars for use in SCCA Can-Am Series racing and made its racing debut in 1977. The T333CS was highly successful; winning 21 races, and 3 championships with three different drivers, between 1977 and 1979. The Lola T333CS commonly used the 5.0-litre Chevrolet V8 engine. 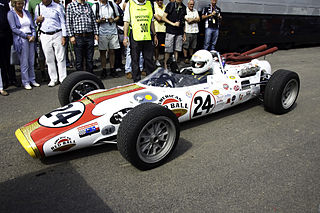 The Lola T160 is a series of purpose-built Group 7 sports prototype race cars, designed and developed by British chassis manufacturer Lola Cars, specifically to compete in the Can-Am series in 1968. It was the successor to the competitive T70, sharing similar design knowledge and cues. Lola built the chassis, constructed out of fiberglass, and molded into an aluminum monocoque. This meant the car was light was lightweight, weighing only 670 kg (1,480 lb). The chassis was designed to accept a small-block engine, but most cars were powered by either the Chevrolet ZL1 or the Ford FE "big-block" motors, generating about 625–750 hp (466–559 kW); mated to a 4-speed or 5-speed Hewland L.G.500 or L.G.600 manual transmission. This made the cars very fast, with a notably excellent power-to-weight ratio. It was used in active competition until 1971, and was succeeded and used alongside the new T220 in 1970.

The BRM P167 is a purpose-built sports prototype race car, designed, developed and built by British Racing Motors to Group 7 racing specifications, specifically to compete in the Can-Am racing series, between 1971. It was BRM's final Can-Am race car chassis. It was powered by a naturally aspirated, Chevrolet big-block engine, developing a solid 600 hp (450 kW).

The Lola T530 is a purpose-built Can-Am sports prototype, designed by British manufacturer Lola Cars in for the revived Can-Am series 1980. It was very successful, winning 7 of the 9 races in its first season of competition alone, and gave Patrick Tambay the championship with Carl A. Haas racing Team. Geoff Brabham won the championship in 1981; despite only winning 2 races. It was used in Can-Am racing until 1983. It was later used in the international Interserie racing series, and the British Thundersports racing series, between 1984 and 1988. Between 1980 and 1988, it scored a total of 32 race wins, and 43 podium finishes; a very impressive tally indeed. As with all other full-size Can-Am cars of the time, it used a mid-mounted 5-liter, naturally-aspirated, Chevrolet V8 engine. A total of 10 chassis' were built.

The McLaren M1A, and its derivatives, the McLaren M1B and the McLaren M1C, are a series of mid-engined Group 7 sports prototype race cars built by McLaren, between 1963 and 1968. The M1A was the team's first self-designed and developed sports car. Later versions, such as the 'M1B' and 'M1C', competed and raced in the North American Can-Am series, starting in 1966 season. The car was raced in North America and Europe in 1963 and 1964 in various Group 7 and United States Road Racing Championship series events. 24 examples of the M1A and M1B were built, and 25 examples of the M1C were manufactured. They were powered by a few different motors, including Chevrolet small-block engine, an Oldsmobile V8 engine, a Chevrolet big-block engine, and even a Ford FE engine. It was constructed out of a tubular space frame chassis, and, combined with its light weight of 551 kg (1,215 lb) this gave it a great power-to-weight ratio. The 4.5 L (270 cu in) Oldsmobile V8 engine developed around 310 hp (230 kW), while the 350 cu in (5.7 L) Chevrolet small-block V8 engine was capable of developing over 550 hp (410 kW), and 538 lb⋅ft (729 N⋅m) of torque. This drove the rear wheels through a Hewland L.G.500 four-speed manual transmission. 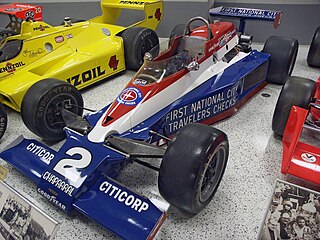 The Lola T500 is an open-wheel racing car chassis, designed, developed and built by Lola Cars, that competed in the CART open-wheel racing series, for competition in the 1978, 1979, and 1980 USAC Championship Car seasons. It was powered by the 840 hp (630 kW) Ford-Cosworth DFX. Only 5 models were produced. It won a total of 3 races, all in 1978, including the famous and prestigious 1978 Indianapolis 500, being driven by Al Unser. 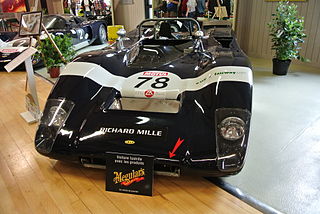 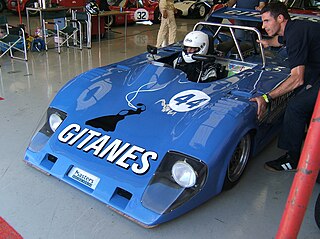 The Lola T280, and its evolutions, the Lola T282, Lola T284, and Lola T286, are a series of 3-liter Group 5 sports prototype race cars, designed by Eric Broadley, John Barnard, and Patrick Head, and developed and built by British manufacturer and constructor Lola, for World Sportscar Championship sports car racing, between 1972 and 1976. 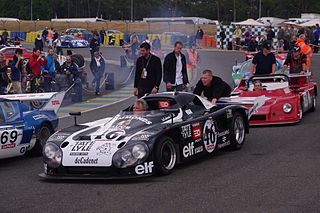 The Lola T380 is a 3-litre Group 5 sports prototype, designed, developed and built by British manufacturer and constructor Lola, for sports car racing, in 1975.

The Lola T310 is a Group 7 sports prototype race car, designed, developed, and built by the British manufacturer and constructor Lola, to compete in the Can-Am championship from the 1972 season.

The Lola T260 is a Group 7 sports prototype race car, designed, developed, and built by the British manufacturer and constructor Lola, under the leadership and guidance of Eric Broadley, to compete in the North American Can-Am championship from the 1971 season.