The London XI was a football team that represented the city of London in the 1955–58 Inter-Cities Fairs Cup.

The competition began in 1955, and the first tournament took three years to complete. The entrants were the major football team of each city which held a Trade Fair. Like many cities taking part, London had several strong teams; however, rules stated that there could only be a single team from each city. [1] It was decided to create a team especially for the tournament, using the best players from each London-based Football League club (at the time 11 clubs; Barnet and Dagenham & Redbridge did not join the League until later, when it was linked with the National League). Membership of the team varied considerably between matches, to the effect that as many as 54 players took part in the 8 matches of the campaign.

The London XI, managed by Chelsea chairman Joe Mears, reached the final of the cup, after coming top of a group that included special XI teams from Basel and Frankfurt, and then beating Lausanne Sports. London lost 8–2 on aggregate over two legs to FC Barcelona.

The London XI only competed in the 1955–58 tournament, all future Inter-Cities Fairs Cups involving a London team were contested by individual clubs from London instead.

A unified London side competed in friendly matches even earlier: a "London" team represented the FA in the historic 1866 London v Sheffield match, there were several challenges against the Glasgow FA during the 1880s, [2] and "London" lost 4-2 to Corinthians on 21 November 1903 in front of 1500, [3] described as Corinthians "had an easy task" in a 1904 Times article. [4] Two other matches have been referenced – an "annual match" versus Birmingham on 3 October 1910 and a match versus Paris on 18 December 1910. [5]

Robert Dennis "Danny" Blanchflower was a Northern Irish footballer who played for and captained Tottenham Hotspur, most notably during its double-winning season of 1960–61. He was ranked as the greatest player ever in Spurs history by The Times in 2009.

Alfred John "Jack" Kelsey was a Welsh international football goalkeeper, who also played for Arsenal. He is regarded as one of the greatest goalkeepers to play for Wales.

Richard Peter Tudor Sillett was an England footballer. He played for Chelsea and Southampton as a right-back, and made three appearances for England. He was the older brother of John Sillett, who managed Coventry City to FA Cup success in 1987. Sir Stanley Matthews once said that Sillett was the best full-back he ever played against.

John Anderson White was a Scottish international football midfielder and sometime inside right who played a significant role for Tottenham Hotspur (Spurs) during their Double winning season in 1960–61. He had two brothers, Eddie and Tom, who were also professional footballers. White was killed by a lightning strike at the age of 27. 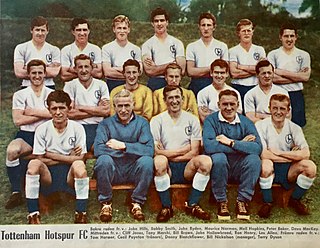 Stanley Bernard Willemse was an English footballer who played as a left-back in the Football League for Brighton and Hove Albion, Chelsea and Leyton Orient.

Harold Hooper was an English footballer who played as an outside forward. He made more than 300 appearances in the Football League, and represented England at under-23 and 'B' international level.

Stanley Charlton was an English footballer and manager. Charlton featured as a right back with clubs Bromley, Leyton Orient and Arsenal. As a manager he was one of the longest serving at Weymouth.

The 1960–61 British Home Championship international football tournament saw a series of high scoring games, with 40 goals scored in just six matches - a ratio of 6.66 goals per game. England took the British title after a final match at Wembley in which they put nine goals past Scotland, who returned with three of their own. Teams in this period frequently fielded as many as five strikers, hoping to outscore opponents rather than rely on heavy defence. This tactic paid dividends, particularly for England, whose haul of 19 included seven for Jimmy Greaves, whilst both Bobby Charlton and Bobby Smith each scored in each of England's three games.

Kenneth Alexander Coote was an English footballer. He is best remembered for his 14 years as a full back and utility player with Brentford, for whom he tops the all-time appearances list with 559 and was also captain of the club. In 2013, Coote placed second in a Football League 125th Anniversary poll of Brentford's best ever captains and he is a member of the club's Hall of Fame.

The 1962 FA Charity Shield was the 40th FA Charity Shield, an annual football match played between the winners of the previous season's Football League and FA Cup competitions. The match took place on 11 August 1962 at Portman Road in Ipswich, and was played between 1961–62 Football League champions Ipswich Town and 1961–62 FA Cup winners Tottenham Hotspur. Watched by a crowd of 20,067, the match ended in a 5–1 victory for Tottenham Hotspur.