Malawi Railways was a government corporation that ran the national rail network of Malawi, Africa, until privatisation in 1999. With effect from 1 December 1999, the Central East African Railways consortium led by Railroad Development Corporation won the right to operate the network. This was the first rail privatisation in Africa which did not involve a parastatal operator. [1]

Upon achieving independence in 1964, Malawi, which had previously been the British protectorate of Nyasaland, inherited a network of three railways. They were the Shire Highlands Railway from Salima, on Lake Malawi, via Blantyre to Port Herald (now Nsanje) on the Shire River; the Central African Railway from Port Herald to Vila Fontes (now Caia), in Portuguese Mozambique; and the Trans-Zambezia Railway, from Vila Fontes to Beira, also in Portuguese Mozambique. The network was run as a single, integrated Malawian system, even though the Trans-Zambezia Railway was located entirely on foreign territory. [2]

All of these lines were narrow gauge and single track, and the Shire Highlands Railway in particular had sharp curves and steep gradients, so the system was inadequate for heavy train loads. Maintenance costs were high and freight volumes were low, so freight rates were up to three times those of Rhodesian and East African lines. [3] [4] Although costly and inefficient, the rail link to Beira remained a main bulk transport link until 1979 when it was destroyed by RENAMO forces in the civil war. By then, Malawi had its second rail link to the Mozambique port of Nacala, which is its principal route for imports and exports today. [5]

From 1974 to 1979, Malawi worked with the Canadian International Development Agency (CIDA) sponsored to build 110 kilometres (70 mi) of new track from Salima to Lilongwe though the Malawi-Canada Railway Project. [6]

The 797 km (495 mi) 1,067 mm (3 ft 6 in) gauge line extends from the Zambian border at Mchinji in the west via Lilongwe to Blantyre and Makhanga in the south. At Nkaya Junction it links with the Nacala line going east via Nayuchi to Mozambique's deepwater port at Nacala on the Indian Ocean. The link south from Makhanga to Mozambique's Beira corridor has been closed since the Mozambique Civil War, with plans for reconstruction not yet realised.

An extension from Mchinji to Chipata in Zambia opened in 2010, [7] and there is a proposal to eventually link up from there with the TAZARA railway at Mpika. [8]

The Rivirivi Bridge was damaged by Cyclone Delfina in January 2003 and reopened in 2005. [9]

Nacala Port and Railway was concessioned to the same CEAR consortium in January 2005. [10]

Modes of transport in Mozambique include rail, road, water, and air. There are rail links serving principal cities and connecting the country with Malawi, Zimbabwe and South Africa. There are over 30,000km of roads, but much of the network is unpaved.

Air Malawi Limited was the state-owned national airline of Malawi, based in Blantyre, which operated regional passenger services. Because of its financial situation, the airline was placed in voluntary liquidation, the Malawi Government announced in November 2012, and flights have been suspended since February 2013.

Rail transport in Zambia is primarily provided by two systems:

The Dona Ana Bridge spans the lower Zambezi River between the towns of Vila de Sena and Mutarara in Mozambique, effectively linking the two halves of the country. It was originally constructed as a railway bridge to link Malawi and the Moatize coal fields to the port of Beira.

Portos e Caminhos de Ferro de Moçambique is a state-owned company that oversees the railway system of Mozambique and its connected ports.

Central East African Railways is a consortium formed in 1999, led by the Railroad Development Corporation, which won the right to operate the Malawi Railways network. The company was sold in September 2008 to INSITEC, an investment group based in Mozambique.

Railway stations in Mozambique include: 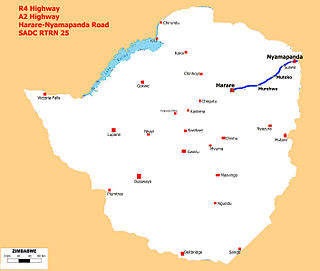 The A2 Highway is a primary road in Zimbabwe running from Harare to Nyamapanda at the border with Mozambique. The Mozambican side border post is called Cochemane. This is a busy entry point used by people travelling by road between South Africa, Malawi, Zimbabwe and Mozambique. It starts at intersection with Samora Machel Avenue; however Enterprise Road itself begins from the T-junction with Robert Mugabe Avenue, opposite the market in Eastlea, east of Simon Muzenda Street Road Port; a bus terminus for inter-regional buses.

Malawi Railways is the national rail network in Malawi, run by a government corporation until privatisation in 1999. As of 1 December 1999 the Central East African Railways, a consortium led by Railroad Development Corporation, won the right to operate the network.

The Port of Nacala, also called the Nacala port complex, is a Mozambican port located in the cities of Nacala and Nacala-a-Velha. Is the deepest port in Southern Africa. The natural deep harbour serves landlocked Malawi with a 931-kilometre (578 mi) railway.

The history of rail transport in Mozambique began in the latter years of the nineteenth century.

The history of rail transport in Zambia began at the start of the twentieth century. 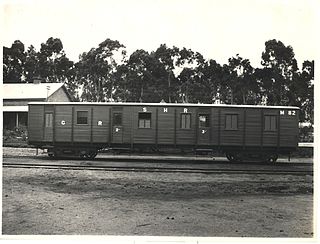 The Shire Highlands Railway Company Ltd was a private railway company in colonial Nyasaland, incorporated in 1895 with the intention of constructing a railway from Blantyre to the effective head of navigation of the Shire River. After problems with routing and finance, a South African 3 ft 6 in gauge railway was constructed between 1903 and 1907, and extended in 1908 to a Nsanje, a distance of 113 miles (182 km) as water levels in the Shire River fell.

Nacala railway, also known as Northern Corridor railway and Nacala Corridor railway, is a railway line that operates in northern Mozambique on a 912 kilometres (567 mi) line that runs west from the port city of Nacala, crossing the central region of Malawi, connecting with the coal belt of Moatize, in northwest Mozambique. It is connected to the Dona Ana-Moatize railway branch and the Sena railway (Chipata-Lilongwe-Blantyre-Nhamayabue-Dondo). It also has a 262 kilometres (163 mi) branch line from Cuamba to Lichinga.

Sena railway, also called Shire Highlands railway, Dondo-Malawi railway and North-South Malawi railway, is a railway that connects Dondo, Mozambique, to Chipata, in Zambia. It is c. 1000 km long, in a 1067 mm gauge.

Mwami, is a town in the Eastern Province of Zambia. The town lies at the international border with Malawi, adjacent to the Malawian city of Mchinji.