Last updated February 14, 2020
Part of the interior of the planet Earth
For other uses, see Mantle (disambiguation).

A mantle is a layer inside a planetary body bounded below by a core and above by a crust. Mantles are made of rock or ices, and are generally the largest and most massive layer of the planetary body. Mantles are characteristic of planetary bodies that have undergone differentiation by density. All terrestrial planets (including Earth), a number of asteroids, and some planetary moons have mantles.

The Earth's mantle is a layer of silicate rock between the crust and the outer core. Its mass of 4.01 × 1024 kg is 67% the mass of the Earth. [1] It has a thickness of 2,900 kilometres (1,800 mi) [1] making up about 84% of Earth's volume. It is predominantly solid but in geological time it behaves as a viscous fluid. Partial melting of the mantle at mid-ocean ridges produces oceanic crust, and partial melting of the mantle at subduction zones produces continental crust. [2]

The silicate mantle of the Earth's moon is approximately 1300–1400 km thick, and is the source of mare basalts. [4] The lunar mantle might possibly be exposed in the South Pole-Aitken basin and/or the Crisium basin. [4] The lunar mantle contains a seismic discontinuity at ~500 km depth, most likely related to a change in composition. [4]

Titan and Triton each have a mantle made of ice or other solid volatile substances. [5] [6]

Some of the largest asteroids have mantles; [7] for example, Vesta has a silicate mantle similar in composition to diogenite meteorites. [8] 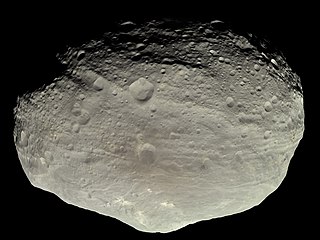 Vesta is one of the largest objects in the asteroid belt, with a mean diameter of 525 kilometres (326 mi). It was discovered by the German astronomer Heinrich Wilhelm Matthias Olbers on 29 March 1807 and is named after Vesta, the virgin goddess of home and hearth from Roman mythology. 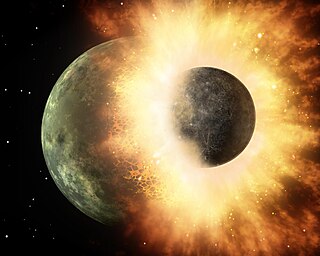 The giant-impact hypothesis, sometimes called the Big Splash, or the Theia Impact suggests that the Moon formed out of the debris left over from a collision between Earth and an astronomical body the size of Mars, approximately 4.5 billion years ago, in the Hadean eon; about 20 to 100 million years after the Solar System coalesced. The colliding body is sometimes called Theia, from the name of the mythical Greek Titan who was the mother of Selene, the goddess of the Moon. Analysis of lunar rocks, published in a 2016 report, suggests that the impact may have been a direct hit, causing a thorough mixing of both parent bodies.

In geology, the crust is the outermost solid shell of a rocky planet, dwarf planet, or natural satellite. It is usually distinguished from the underlying mantle by its chemical makeup; however, in the case of icy satellites, it may be distinguished based on its phase.

A lithosphere is the rigid, outermost shell of a terrestrial-type planet, or natural satellite, that is defined by its rigid mechanical properties. On Earth, it is composed of the crust and the portion of the upper mantle that behaves elastically on time scales of thousands of years or greater. The outermost shell of a rocky planet, the crust, is defined on the basis of its chemistry and mineralogy. 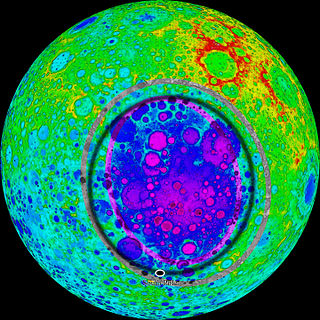 The South Pole–Aitken basin is an immense impact crater on the far side of the Moon. At roughly 2,500 km (1,600 mi) in diameter and 13 km (8.1 mi) deep, it is one of the largest known impact craters in the Solar System. It is the largest, oldest, and deepest basin recognized on the Moon. It was named for two features on opposite sides of the basin: the crater Aitken on the northern end and the lunar south pole at the other end. The outer rim of this basin can be seen from Earth as a huge chain of mountains located on the Moon's southern limb, sometimes informally called "Leibnitz mountains". 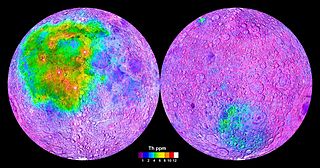 KREEP, an acronym built from the letters K, REE and P, is a geochemical component of some lunar impact breccia and basaltic rocks. Its most significant feature is somewhat enhanced concentration of a majority of so-called "incompatible" elements and the heat-producing elements, namely radioactive uranium, thorium, and potassium. 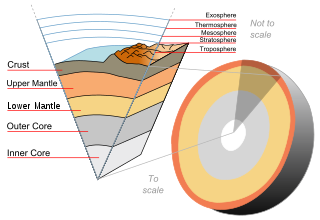 In planetary science, planetary differentiation is the process of separating out different constituents of a planetary body as a consequence of their physical or chemical behavior, where the body develops into compositionally distinct layers; the denser materials of a planet sink to the center, while less dense materials rise to the surface, generally in a magma ocean. Such a process tends to create a core and mantle. Sometimes a chemically distinct crust forms on top of the mantle. The process of planetary differentiation has occurred on planets, dwarf planets, the asteroid 4 Vesta, and natural satellites.

Peridotite is a dense, coarse-grained igneous rock consisting mostly of the minerals olivine and pyroxene. Peridotite is ultramafic, as the rock contains less than 45% silica. It is high in magnesium (Mg2+), reflecting the high proportions of magnesium-rich olivine, with appreciable iron. Peridotite is derived from the Earth's mantle, either as solid blocks and fragments, or as crystals accumulated from magmas that formed in the mantle. The compositions of peridotites from these layered igneous complexes vary widely, reflecting the relative proportions of pyroxenes, chromite, plagioclase, and amphibole. 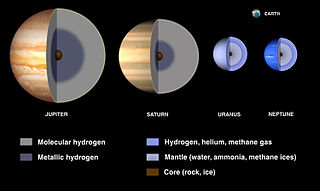 The planetary core consists of the innermost layer(s) of a planet. Cores of specific planets may be entirely solid or entirely liquid, or may be a mixture of solid and liquid layers as is the case in the Earth. In the Solar System, core size can range from about 20% (Moon) to 85% of a planet's radius (Mercury). 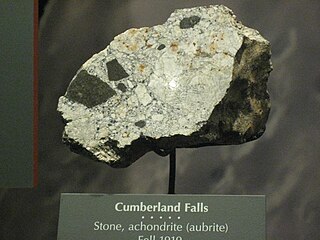 An achondrite is a stony meteorite that does not contain chondrules. It consists of material similar to terrestrial basalts or plutonic rocks and has been differentiated and reprocessed to a lesser or greater degree due to melting and recrystallization on or within meteorite parent bodies. As a result, achondrites have distinct textures and mineralogies indicative of igneous processes.

The internal structure of the Earth is layered in spherical shells: an outer silicate solid crust, a highly viscous asthenosphere and mantle, a liquid outer core that is much less viscous than the mantle, and a solid inner core. Scientific understanding of the internal structure of the Earth is based on observations of topography and bathymetry, observations of rock in outcrop, samples brought to the surface from greater depths by volcanoes or volcanic activity, analysis of the seismic waves that pass through the Earth, measurements of the gravitational and magnetic fields of the Earth, and experiments with crystalline solids at pressures and temperatures characteristic of the Earth's deep interior.

The core–mantle boundary of the Earth lies between the planet's silicate mantle and its liquid iron-nickel outer core. This boundary is located at approximately 2891 km (1796 mi) depth beneath the Earth's surface. The boundary is observed via the discontinuity in seismic wave velocities at that depth due to the differences between the acoustic impedances of the solid mantle and the molten outer core. P-wave velocities are much slower in the outer core than in the deep mantle while S-waves do not exist at all in the liquid portion of the core. Recent evidence suggests a distinct boundary layer directly above the CMB possibly made of a novel phase of the basic perovskite mineralogy of the deep mantle named post-perovskite. Seismic tomography studies have shown significant irregularities within the boundary zone and appear to be dominated by the African and Pacific large low-shear-velocity provinces (LLSVPs).

The Earth's crust is a thin shell on the outside of the Earth, accounting for less than 1% of Earth's volume. It is the top component of lithosphere: a division of Earth's layers that includes the crust and the upper part of the mantle. The lithosphere is broken into tectonic plates that move, allowing heat to escape from the interior of the Earth into space.

HED meteorites are a clan (subgroup) of achondrite meteorites. HED stands for "howardite–eucrite–diogenite". These achondrites came from a differentiated parent body and experienced extensive igneous processing not much different from the magmatic rocks found on Earth and for this reason they closely resemble terrestrial igneous rocks.

Eucrites are achondritic stony meteorites, many of which originate from the surface of the asteroid 4 Vesta and as such are part of the HED meteorite clan. They are the most common achondrite group with well over 100 distinct finds at present.

Having a mean density of 3,346.4 kg/m³, the Moon is a differentiated body, being composed of a geochemically distinct crust, mantle, and planetary core. This structure is believed to have resulted from the fractional crystallization of a magma ocean shortly after its formation about 4.5 billion years ago. The energy required to melt the outer portion of the Moon is commonly attributed to a giant impact event that is postulated to have formed the Earth-Moon system, and the subsequent reaccretion of material in Earth orbit. Crystallization of this magma ocean would have given rise to a mafic mantle and a plagioclase-rich crust.

Extraterrestrial liquid water is water in its liquid state that naturally occurs outside Earth. It is a subject of wide interest because it is recognized as one of the key prerequisites for life as we know it and thus surmised as essential for extraterrestrial life.

This is a glossary of terms used in meteoritics, the science of meteorites.