After some redevelopment which started with the area coming under the control of the Plymouth Development Corporation for five years from 1993, the peninsula now has a marina and centre for sea sport.

The Mount Batten Breakwater (also referred to as Cattewater Breakwater and, incorrectly, Mount Batten Pier) to the west doubles as a breakwater for the Cattewater and Sutton Harbour. It was built in 1881 by the Cattewater Commissioners and subsequently refurbished by the Plymouth Development Corporation opening formally in 1995.[ citation needed ]

According to excavations reported by Barry Cunliffe in 1988, Mount Batten was the site of the earliest trade with Europe yet discovered in Bronze Age Britain, operating from the late Bronze Age, peaking in the late Iron Age Britain and continuing in operation throughout the Roman period. [2] [3] [4] It appears to have been the primary route of entry to Bronze Age Britain for large quantities of continental commodities such as wine, and is therefore a speculative candidate for the trading centre of 'Ictis' reported by Diodorus Siculus [5] and for the 'Tamaris' of Ptolemy's Geographia. [6] Three fine British-made bronze mirrors were excavated on the peninsula, among many other ancient finds, but were lost in the Plymouth Blitz. [7]

In the later Medieval period, Mount Batten became an important defensive point for the developing settlement at Plymouth Harbour, providing a field of fire from across the other side of the Cattewater, the channel connecting the old town to the sea. In 1652, Mount Batten Tower, a 30-foot high circular artillery fort was built here; it is a Scheduled Ancient Monument.

In 1973, a short distance from Mount Batten, the Cattewater Wreck was discovered during dredging. Subsequent survey and excavation work indicated that the wreck was of a 200–300 ton merchantmen believed to have been lost in the early 16th Century. It has the distinction of being the first wreck to be protected under the Protection of Wrecks Act 1973. On 16 February 1811, the frigate HMS Amethyst wrecked on the ground near Cony Cliff Rocks, Mount Batten. Eight seamen lost their lives.[ citation needed ]

Extensive quarrying took place at Mount Batten between 1839 and the mid-1860s. [8] Stones from the quarry were used for building steam yards at HMNB Devonport. The quarrying substantially changed the local landscape and threatened the Mount Batten Tower. Following a petition from 53 leading citizens to the Admiralty, Lord Morley, the landowner, imposed restrictions on quarrying thereby saving the tower.[ citation needed ]

Work on the Mount Batten Breakwater [9] (also referred to as Mount Batten Pier and Cattewater Breakwater) started in 1878 and was completed in 1881 at a total cost of £20,000. It is 915 feet (279 metres) in length and the foundations are 20 feet (6 metres) below the low tide mark. The breakwater was promoted by the Cattewater Commissioners who were responsible for shipping in the area. During the air-station years the breakwater was closed to the public and used, for a period, to store flying boats. In 1995 the breakwater was refurbished and re-opened to the public.

The breakwater is a popular site for local anglers and for those watching ships using the Plymouth Sound. Boats in the Fastnet and Americas Cup, can also be viewed. In August each year, the breakwater is used for the British Firework Championships.

The coastal walk to Jennycliff and local inns, originally built to service those working on the quarries, helped make Mount Batten an increasingly popular destination for Plymothians. During one bank holiday in 1906, some 10,000 visitors took the ferry to the area. This fledgling tourist industry came to an abrupt end when the area was closed to the public.

Seaplane trials first took place around Mount Batten as early as 1913 and an air-station was subsequently developed. A local commemorative display poster cites the following names and years for the air station:

Between 1917 and 1945, with some gaps, it was a flying boat base for both the Royal Air Force and the Royal Navy. The RAF operated search and rescue launches from the base. T. E. Lawrence was stationed there under the moniker Aircraftsman Shaw. [10]

Shorts Sunderland flying boats of the Royal Australian Air Force operated from RAF Mount Batten during World War II, taking part in the Battle of the Atlantic. The RAF finally left in 1986.

The former RAF Mount Batten site was transferred to the Plymouth Development Corporation in 1992.

In 1999, the Mount Batten Sailing and Watersports Centre opened on the site of the former sergeants' mess. The peninsula is also home to a small residential community with 22 houses, Spinnaker Quay, dating from 2001.

Plymouth Sound, or locally just The Sound, is a deep Inlet or sound in the English Channel near Plymouth in England. 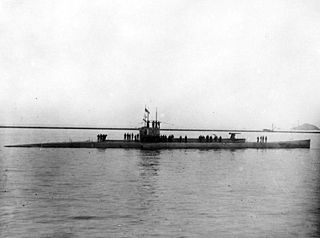 HMS J7 was a J-class submarine operated by the Royal Navy and the Royal Australian Navy.

The Rhins of Galloway, otherwise known as the Rhins of Wigtownshire, is a hammer-head peninsula in Dumfries and Galloway, Scotland. Stretching more than 25 miles from north to south, its southern tip is the Mull of Galloway, the southernmost point of Scotland.

The Saunders Roe A.27 London was a British military biplane flying boat built by the Saunders Roe company. Only 31 were built, entering service with the Royal Air Force in 1936. Although due for replacement by the outbreak of World War II, they saw some active service pending the introduction of the ultimately unsuccessful Lerwick. 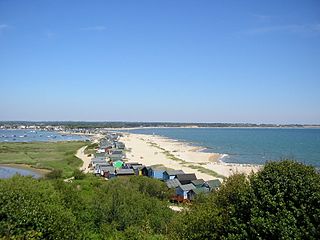 Hengistbury Head is a headland jutting into the English Channel between Bournemouth and Mudeford in the English county of Dorset. It is a site of international importance in terms of its archaeology and is scheduled as an Ancient Monument. Declared a Local Nature Reserve in 1990, the head and its surroundings form part of the Christchurch Harbour Site of Special Scientific Interest. It is also a Special Area of Conservation, Special Protection Area, an Environmentally Sensitive Area and a Site of Nature Conservation Interest. The name "Hengistbury Head" refers to the immediate area; the elevated portion is called Warren Hill. 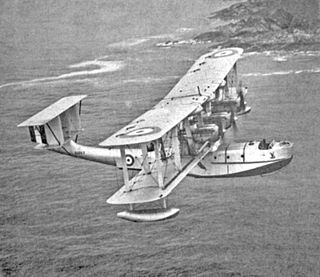 The Blackburn Iris was a British three-engined biplane flying boat of the 1920s. Although only five Irises were built, it was used as a long-range maritime reconnaissance aircraft by the Royal Air Force, where it equipped a squadron for four years, being used to carry out a number of notable long-distance flights. The final version of the Iris, the Iris Mark V was developed into the aircraft that replaced it in Squadron service, the Blackburn Perth.

Cattewater Wreck is a wooden three-masted, skeleton-built vessel, one of many ships that have wrecked in Cattewater, Plymouth Sound, England. This wreck is close to the entrance of Sutton Harbour, its name is still unknown but it is believed to be from the 16th Century. It is a Protected Wreck managed by Historic England. 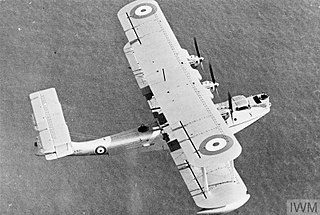 The Blackburn Perth was a British flying boat which was in service during the interwar period. It was essentially an upgraded Iris, and hence the largest flying-boat to serve with the Royal Air Force at the time.

The Short R.24/31 was a British twin-engined, high-wing cantilever gull winged monoplane flying-boat designed and built by Short to Air Ministry specification R.24/31 for a "General Purpose Open Sea Patrol Flying Boat". The contract also specified the use of the experimental Rolls-Royce Goshawk engine. The Saunders-Roe London and the Supermarine Stranraer competed successfully for this contract.

Group Captain Gerald Edward Livock was an English officer of the Royal Naval Air Service and Royal Air Force, who served from the beginning the First World War until the end of Second, and was also an archaeologist and cricketer. A right-handed batsman and wicket-keeper, he played first-class cricket for various teams between 1923 and 1934.

The History of Plymouth in Devon, England, extends back to the Bronze Age, when the first settlement began at Mount Batten a peninsula in Plymouth Sound facing onto the English Channel. It continued as both a fishing and continental tin trading port through the late Iron Age into the Early Medieval period, until the more prosperous Saxon settlement of Sutton, later renamed Plymouth, surpassed it. With its natural harbour and open access to the Atlantic, the town found wealth and a national strategic importance during the establishment of British naval dominance in the colonisation of the New World. In 1620 the Pilgrim Fathers departed from Plymouth to establish the second English colony in America. During the English Civil War the town was besieged between 1642 and 1646 by the Royalists, but after the Restoration a Dockyard was established in the nearby town of Devonport. Throughout the Industrial Revolution Plymouth grew as a major mercantile shipping industry, including imports and passengers from the US, whilst Devonport grew as a naval base and ship construction town, building battleships for the Royal Navy – which later led to its partial destruction during World War II in a series of air-raids known as the Plymouth Blitz. After the war was over, the city centre was completely rebuilt to a new plan. 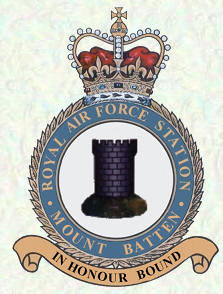 RAF Mount Batten was a Royal Air Force station and flying boat base at Mount Batten, a peninsula in Plymouth Sound, Devon, England. Originally a seaplane station opened in 1917 as a Royal Navy Air Service Station Cattewater it became RAF Cattewater in 1918 and in 1928 was renamed RAF Mount Batten. The station motto was In Honour Bound which is the motto of the Mountbatten family. 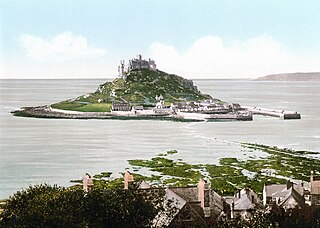 Ictis, or Iktin, is or was an island described as a tin trading centre in the Bibliotheca historica of the Sicilian-Greek historian Diodorus Siculus, writing in the first century BC.

The Marine Branch (1918-1986) was a branch of the Royal Air Force (RAF) which operated watercraft in support of RAF operations. Just days after the creation of the RAF itself, the Marine Craft Section (MCS) was created with the transfer of Royal Navy Air Service (RNAS) vessels and personnel to the new service. Originally tasked with the support of RNAS, and later RAF, seaplanes, Marine Craft Section was to achieve its greatest size during the Second World War, and achieved fame for its role in air-sea rescue operations. After the war MCS was granted full branch status on 11 December 1947, however post war the role of the new branch became greatly reduced with the end of the British Empire, the withdrawal of flying boats from service, and the increasing use of helicopters in air-sea rescue. The branch was disestablished on 8 January 1986.

The fortifications of Plymouth in Devon are extensive due to its natural harbour, its commanding position on the Western Approaches and its role as the United Kingdom's second largest naval base after Portsmouth. The first medieval defences were built to defend Sutton Harbour on the eastern side of Plymouth Sound at the mouth of the River Plym, but by the 18th century, naval activity had begun to shift westward to Devonport at the mouth of the River Tamar. During the Victorian era, advances in military technology led to a huge programme of fortification encompassing the whole of Plymouth Sound together with the overland approaches. Many of these works remained in military use well into the 20th century.

Mount Batten or Mountbatten may refer to: