Monroe had a highly successful college career at the University of North Carolina at Chapel Hill from 2000 to 2004. His achievements include:

Nicholas competed in doubles in his first main-draw Futures match. He and partner (compatriot) Tripp Phillips lost in the first round of USA F21. This was the only tour event he competed in 2001. [1]

Monroe reached the quarterfinals of his first Futures tournament in singles play, USA F11, played in Peoria, Illinois in July.

After playing only four Futures events in 2003, Monroe played, from June, a full schedule in 2004. In his first doubles tournament of the year, he reached his first final, partnering Jonathan Igbinovia. In August he reached his first singles semifinal, at Indonesia F2 in Makassar. In October, Monroe captured his first doubles Futures title, in doubles, partnering Márcio Torres, at Venezuela F3. He won a second two weeks later, Mexico F17, playing alongside Jeremy Wurtzman. Later in November, Monroe played in his first Challenger tournament, the Puebla Challenger in Puebla, Mexico, losing in the first round to Santiago González. In doubles, he and Wurtzman reached the semifinals. Three weeks later in Guadalajara, however, he won two Challenger matches to reach the quarterfinals.

Monroe competed in 29 events in 2005, all but one of which were Futures. He lost in the first round of his only main draw Challenger event singles match, to Zack Fleishman at the Cuenca Challenger. Monroe won his first singles title, South Africa F1 in late October, defeating Stephen Mitchell in the final. [1]

Nicholas started the year by winning the ITF Circuit title in Costa Rica. A month later, he won another ITF title, this time in Nigeria. He reached the semifinals of a USTA Pro Circuit event in Little Rock, before reaching back-to-back finals in India. He lost to Karan Rastogi in Delhi and defeated Sunil-Kumar Sipaeya in Dehradun. He reached another ITF Circuit final in the fall in Japan, where he lost to Satoshi Iwabuchi. At the beginning of the year, Nick won consecutive doubles titles on the ITF Circuit with partner Sam Warburg in Mexico and Costa Rica. [1]

Nicholas began the year by attempting to qualify for the Australian Open. He defeated Jeremy Chardy in his 1st rd singles qualifying match. He reached consecutive ITF Futures events in Japan, where he lost to Gouichi Motomura both times. He won two titles at ITF Futures events in Mexico and won a USTA Pro Circuit event in Rochester, New York, where he defeated Robert Yim in the final. The fall of 2007 saw Nick reach the semifinals of USTAPro Circuit events in Manchester, Texas, where he lost to eventual champion Michael McClune, and Waikoloa, Hawaii where he lost to Lester Cook. He partnered with Izak van der Merwe to win the USTA Pro Circuit doubles title in Brownsville, Texas. [1]

Nicholas had his best year as a professional in 2013, finishing the year with a Doubles Ranking of No. 53. In January 2013, Monroe and partner Raven Klaasen made it to the semifinals of the 2013 Aircel Chennai Open, falling to Benoît Paire and Stanislas Wawrinka, after a surprise quarterfinal win over the #1 Seeds Mahesh Bhupathi and Daniel Nestor. He then teamed up successfully with Simon Stadler to play the Copa Claro in Buenos Aires, Argentina. They made it to the final, falling to the Italian pair of Fabio Fognini and Simone Bolelli. In July 2013, he won his first ATP title in doubles also with Stadler at the 250 level at the 2013 Bastad Skistar Swedish Open and reached the final of the 2013 Umag Open in Croatia also on clay.

Following three semi-final finishes in Chennai, Auckland and Quito all with Artem Sitak, Monroe reached a top 40 doubles ranking of No. 39 on 3 April 2017 after the biggest run of his career to the final of the 2017 Miami Open with Jack Sock. [3] He later peaked at a career-high of No. 30 on 2 October 2017 after reaching his ninth final at the 2017 ATP Shenzhen Open partnering Nikola Mektic.

He reached the third round at the 2021 Australian Open for the first time at this Major partnering Frances Tiafoe.

Nicholas has played three seasons with World TeamTennis starting in 2006 when he debuted in the league with the Springfield Lasers, followed by a season with the Kansas City Explorers in 2012 and the Washington Kastles in 2019. It was announced that he will re-joining the Washington Kastles during the 2020 WTT season set to begin July 12 at The Greenbrier. [4]

Current through the 2021 Swedish Open. 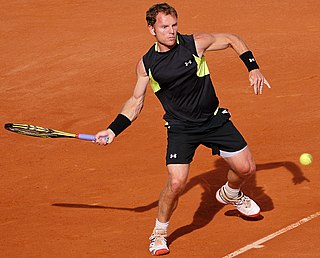 Michael Craig Russell is a retired American professional tennis player, who is now the tennis coach of Tennys Sandgren. He reached a career-high singles ranking of World No. 60 in August 2007. His 23 United States Tennis Association (USTA) Pro Circuit singles titles were the all-time record, as of November 2013. That month he became the third-highest-ranked American in the world.

Wayne Odesnik is a South African-born American retired professional left-handed tennis player, with a two-handed backhand. His highest singles ranking was No. 77 in 2009. 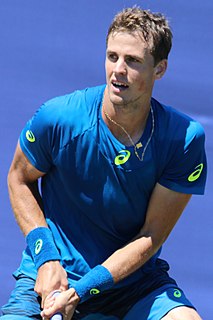 Scott Lipsky is an American former professional tennis player and coach. As a player, Lipsky was primarily a doubles specialist. 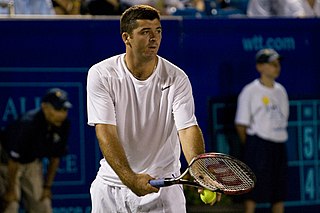 Jesse Witten is an American professional tennis player. He is a graduate of Lely High School and the University of Kentucky, where he majored in kinesiology. 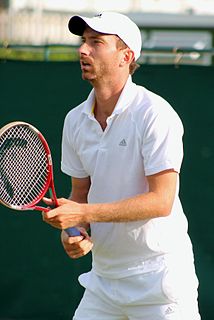 Matwé Middelkoop is a professional Dutch tennis player. Originally competing in both singles and doubles, he is currently a doubles specialist. Middelkoop has reached a career high singles ranking of World No. 197 achieved on 3 November 2008. He also has reached a career high doubles ranking of World No. 30 achieved on 27 August 2018. Middelkoop represents his native country Netherlands competing in Davis Cup matches, where he holds a 3–1 record.

Michael Robert Hill is a former tennis player from Australia who turned professional in 1997 and retired in 2005. He was primarily a doubles specialist, achieving a career-high doubles ranking of World Number 18, reached on 30 July 2001.

Jack Sock is an American professional tennis player. He has won four career ATP singles titles and 14 doubles titles, and has career-high rankings of world No. 8 in singles and world No. 2 in doubles. 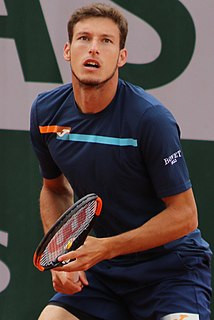 Pablo Carreño Busta, also known as simply Pablo Carreño, is a Spanish professional tennis player. Currently ranked in the top 15 in men's singles by the Association of Tennis Professionals (ATP), he has reached a career-high of world No. 10 on 11 September 2017. He also reached a best doubles ranking of No. 16, on 17 July 2017.

Filip Peliwo is a Canadian professional tennis player. Peliwo became the first Canadian male and second Canadian ever to win a Grand Slam in singles at any level with his 2012 Wimbledon boys' title win. This was Canada's second Grand Slam title in two days, one day after Eugenie Bouchard's. With the victory, Peliwo reached the No. 1 combined junior world ranking in July 2012, the first time a Canadian has been top ranked. He won his second straight junior Grand Slam title at the 2012 US Open. Peliwo was also runner-up in the boys singles events at the 2012 Australian Open and French Open. He reached a career-high ATP singles ranking of No. 161 on May 21, 2018. 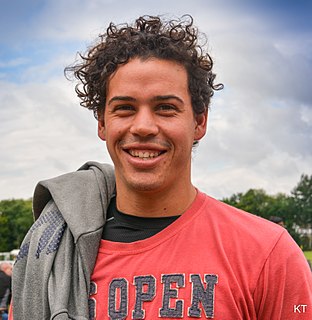 Jared Donaldson is an American professional tennis player from Glocester, Rhode Island. Donaldson was the only American to qualify for the inaugural Next Generation ATP Finals at the end of 2017 as the fifth seed. He has won a Challenger title in singles as well as doubles, with both of them having come at the Royal Lahaina Challenger in 2015. 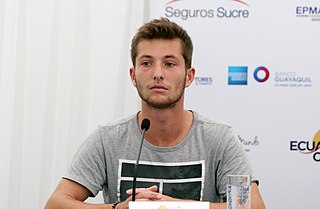