Nitrilotriacetic acid (NTA) is the aminopolycarboxylic acid with the formula N(CH2CO2H)3. It is a colourless solid that is used as a chelating agent, which forms coordination compounds with metal ions (chelates) such as Ca2+, Co2+ , Cu2+, and Fe3+. [5]

Nitrilotriacetic acid is commercially available as the free acid and as the sodium salt. It is produced from ammonia, formaldehyde, and sodium cyanide or hydrogen cyanide. Worldwide capacity is estimated at 100 thousand tonnes per year. [6] NTA is also cogenerated as an impurity in the synthesis of EDTA, arising from reactions of the ammonia coproduct. [7]

The uses of NTA are similar to those of EDTA, both being chelating agents. It is used for water softening and as a replacement to sodium and potassium triphosphate in detergents, and cleansers.

In one application, NTA as a chelating agent removes Cr, Cu, and As from wood that had been treated with chromated copper arsenate. [9]

In the laboratory, this compound is used in complexometric titrations. A variant of NTA is used for protein isolation and purification in the His-tag method. [10] The modified NTA is used to immobilize nickel on a solid support. This allows purification of proteins containing a tag consisting of six histidine residues at either terminus. [11]

For laboratory uses Ernst Hochuli et al. 1987 coupled the NTA ligand and Nickel-ions to agarose beads. [13] This Ni-NTA Agarose is the most used tool to purify his tagged proteins via affinity chromatography.

Nitriloacetic acid can cause eye, skin, and respiratory tract irritation; and can cause kidney and bladder damage. The compound is anticipated to have the potential to cause human cancers. [2]

In contrast to EDTA, NTA is easily biodegradable and is almost completely removed during wastewater treatment. [6] The environmental impacts of NTA are minimal. Despite widespread use in cleaning products, the concentration in the water supply is too low to have a sizeable impact on human health or environmental quality. [14]

Chelation is a type of bonding of ions and molecules to metal ions. It involves the formation or presence of two or more separate coordinate bonds between a polydentate ligand and a single central atom. These ligands are called chelants, chelators, chelating agents, or sequestering agents. They are usually organic compounds, but this is not a necessity, as in the case of zinc and its use as a maintenance therapy to prevent the absorption of copper in people with Wilson's disease. 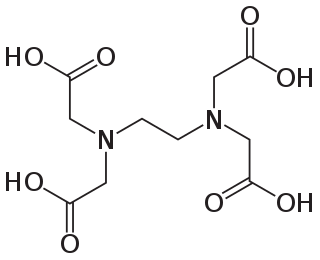 Ethylenediaminetetraacetic acid (EDTA) is an aminopolycarboxylic acid with the formula [CH2N(CH2CO2H)2]2. This white, water-soluble solid is widely used to bind to iron and calcium ions. It binds these ions as a hexadentate ("six-toothed") chelating agent. EDTA is produced as several salts, notably disodium EDTA, sodium calcium edetate, and tetrasodium EDTA.

A polyhistidine-tag is an amino acid motif in proteins that typically consists of at least six histidine (His) residues, often at the N- or C-terminus of the protein. It is also known as hexa histidine-tag, 6xHis-tag, His6 tag, by the US trademarked name HIS TAG, and most commonly as His-Tag. The tag was invented by Roche, although the use of histidines and its vectors are distributed by Qiagen. Various purification kits for histidine-tagged proteins are available from Qiagen, Sigma, Thermo Scientific, GE Healthcare, Macherey-Nagel, Cube Biotech, Clontech, Bio-Rad, [Bio-Works] and others.

Sodium triphosphate (STP), also sodium tripolyphosphate (STPP), or tripolyphosphate (TPP),) is an inorganic compound with formula Na5P3O10. It is the sodium salt of the polyphosphate penta-anion, which is the conjugate base of triphosphoric acid. It is produced on a large scale as a component of many domestic and industrial products, especially detergents. Environmental problems associated with eutrophication are attributed to its widespread use.

Ethylenediamine (abbreviated as en when a ligand) is the organic compound with the formula C2H4(NH2)2. This colorless liquid with an ammonia-like odor is a basic amine. It is a widely used building block in chemical synthesis, with approximately 500,000 tonnes produced in 1998. Ethylenediamine readily reacts with moisture in humid air to produce a corrosive, toxic and irritating mist, to which even short exposures can cause serious damage to health (see safety). Ethylenediamine is the first member of the so-called polyethylene amines. 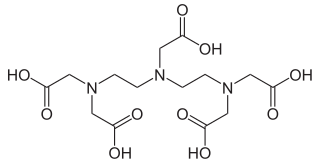 Pentetic acid or diethylenetriaminepentaacetic acid (DTPA) is an aminopolycarboxylic acid consisting of a diethylenetriamine backbone with five carboxymethyl groups. The molecule can be viewed as an expanded version of EDTA and is used similarly. It is a white solid with limited solubility in water.

Tetrasodium EDTA is the salt resulting from the neutralization of ethylenediaminetetraacetic acid with four equivalents of sodium hydroxide (or an equivalent sodium base). It is a white solid that is highly soluble in water. Commercial samples are often hydrated, e.g. Na4EDTA.4H2O. The properties of solutions produced from the anhydrous and hydrated forms are the same, provided they are at the same pH.

Ethylenediamine-N,N'-disuccinic acid (EDDS) is an aminopolycarboxylic acid. It is a colourless solid that is used as chelating agent that may offer a biodegradable alternative to EDTA, which is currently used on a large scale in numerous applications. 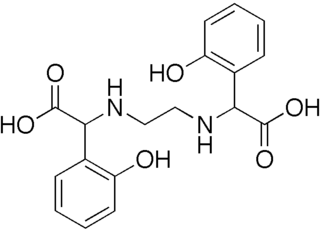 EDDHA or ethylenediamine-N,N′-bis(2-hydroxyphenylacetic acid) is a chelating agent. Like EDTA, it binds metal ions as a hexadentate ligand, using two amines, two phenolate centers, and two carboxylates as the six binding sites. The complexes are typically anionic. The ligand itself is a white, water soluble powder. Both the free ligand and its tetraanionic chelating agent are abbreviated EDDHA. In contrast to EDDHA, most related aminopolycarboxylic acid chelating agents feature tertiary amines and few have phenolate groups.

A stability constant is an equilibrium constant for the formation of a complex in solution. It is a measure of the strength of the interaction between the reagents that come together to form the complex. There are two main kinds of complex: compounds formed by the interaction of a metal ion with a ligand and supramolecular complexes, such as host–guest complexes and complexes of anions. The stability constant(s) provide(s) the information required to calculate the concentration(s) of the complex(es) in solution. There are many areas of application in chemistry, biology and medicine.

Metal-binding proteins are proteins or protein domains that chelate a metal ion.

Trisodium N-(1-carboxylatoethyl)iminodiacetate, methylglycinediacetic acid trisodium salt (MGDA-Na3) or trisodium α-DL-alanine diacetate (α-ADA), is the trisodium anion of N-(1-carboxyethyl)iminodiacetic acid and a tetradentate complexing agent. It forms stable 1:1 chelate complexes with cations having a charge number of at least +2, e.g. the "hard water forming" cations Ca2+ or Mg2+. α-ADA is distinguished from the isomeric β-alaninediacetic acid by better biodegradability and therefore improved environmental compatibility.

Transition metal amino acid complexes are a large family of coordination complexes containing the conjugate bases of the amino acids, the 2-aminocarboxylates. Amino acids are prevalent in nature, and all of them function as ligands toward the transition metals. Not included in this article are complexes of the amides and ester derivatives of amino acids. Also excluded are the polyamino acids including the chelating agents EDTA and NTA.