Noddy (O.F. naudin [1] ) also Noddie, Nodde or Knave Noddy, is a 16th-century English card game ancestor of Cribbage. It is the oldest identifiable card game with this gaming structure and thus probably also ancestral to the more-complicated 17th-century game of Costly Colours.

The earliest reference to the game of Noddy in the Oxford English Dictionary dates from 1589. The basic term noddy, means a fool or simpleton, but in the gaming sense, it is just the name given to the Knave of the suit turned up at the start of play.

A very interesting description of the game can be found in Randle Holme's The Academy of Armory, written in 1688, which displays previously unrecorded scoring features and terminology. [2]

Cribbage without the Crib

Noddy can be thought of as the "small Cribbage without the Crib". But it would seem that the game of Noddy was played for counters, and that it was fifteen or twenty-one up, as quoted by Shirley. [3] In a play of Middleton's, Christmas, speaking of the sports of that time as children, says that the game was played for thirty one. [4] And in Salton's Tales [5] the game was depicted as being played for twenty one. It is probable, however, that it was played all the three ways, as 15, 21 and 31 points at the choice of the players.

Edmund Gayton (Festivous Notes upon Don Quixot, 1654) speaks of noddy boards, but Robert Nares in A Glossary: or Collection of words, phrases, names and allusions to customs, proverbs, &c (1822) says that Noddy was not played with a board, [6] which seems to be plausible due to the natural evolution of card games.

Noddy is a game for two or four players - the latter presumably partners - receiving each 3 cards from a 52-card pack ranking from Ace (low) to King (high). The object of the game is to peg points for making combinations both in the hand and in the play up to 31 over as many deals as it takes. A23 is a valid sequence, but AKQ isn't. Whoever cuts the lower card deals first.

The earliest reference to the game in the Oxford English Dictionary, dates from 1589. It is now presumed extinct, although Parlett published its rules in 2008. [7]

A wild card in card games is one that may be used to represent any other playing card, sometimes with certain restrictions. These may be jokers, for example in Rummy games, or ordinary ranked and suited cards may be designated as wild cards. A card that is not wild may be referred to as a natural card. Jokers, however, may also have other uses, such as being a permanent top trump. 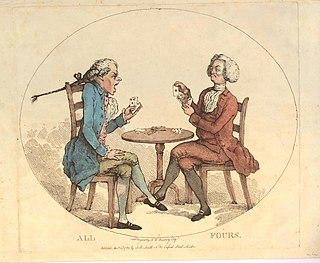 All Fours is a traditional English card game, once popular in pubs and taverns as well as among the gentry, that flourished as a gambling game until the end of the 19th century. It is a trick-taking card game that was originally designed for two players, but developed variants for more players. According to Cotton, the game originated in Kent, but spread to the whole of England and eventually abroad. It is the eponymous and earliest recorded game of a family that flourished most in 19th century North America and whose progeny include Pitch, Pedro and Cinch, games that even competed with Poker and Euchre. Nowadays the original game is especially popular in Trinidad and Tobago, but regional variants have also survived in England. The game's "great mark of distinction" is that it gave the name 'Jack' to the card previously known as the Knave. 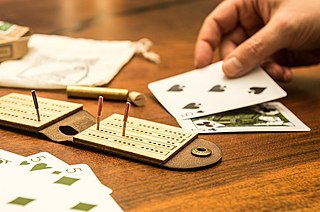 Cribbage, or crib, is a card game traditionally for two players, but commonly played with three, four or more, that involves playing and grouping cards in combinations which gain points. Cribbage has several distinctive features: the cribbage board used for score-keeping, the eponymous crib, box, or kitty —a separate hand counting for the dealer—two distinct scoring stages and a unique scoring system including points for groups of cards that total fifteen. It has been characterized as "Britain's national card game" and the only one legally playable on licensed premises without requiring local authority permission. 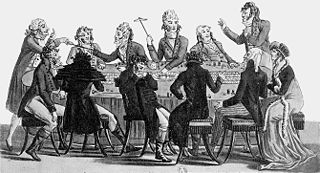 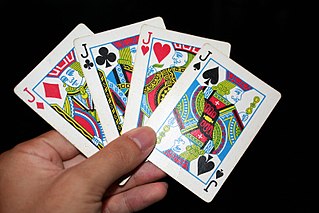 A jack or knave is a playing card which, in traditional French and English decks, pictures a man in the traditional or historic aristocratic or courtier dress, generally associated with Europe of the 16th or 17th century. The usual rank of a jack is between the ten and the queen. As the lowest face card, the jack often represents a minimum standard — for example, many poker games require a minimum hand of a pair of jacks in order to open wagering.

Polignac is a French 18th century trick-taking card game ancestral to Hearts and Black Maria. It is played by 3-6 players with a 32-card deck. It is sometimes played as a party game with the 52-card pack, however, it is better as a serious game for four, playing all against all. Other names for this game include Quatre Valets and Stay Away. Knaves is a variant and it is also similar to the Austrian and German games, Slobberhannes, Eichelobern and Grasobern. 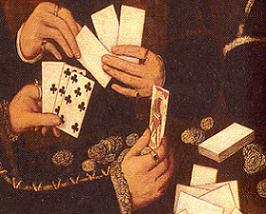 Spoil-Five is the traditional book version of the Irish national card game called Twenty-Five, which underlies the Canadian game of Forty-fives. Charles Cotton describes it in 1674 as "Five Fingers", a nickname applied to the Five of Trumps extracted from the fact that the Irish word cúig means both 'five' and 'trick'. It is supposed to be of great antiquity, and widely believed to have originated in Ireland, although "its venerable ancestor", Maw, of which James I of England was very fond, is a Scottish game.

Cribbage Square Solitaire is a solitaire card game based on cribbage which can be played using a deck of playing cards. This game works the same way as Poker Squares, but with cribbage scoring. 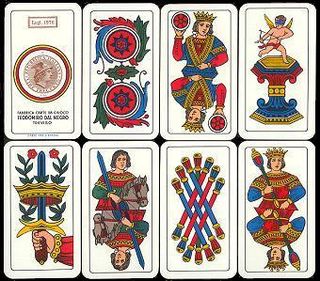 Tressette or Tresette is a 40-card, trick-taking card game. It is one of Italy's major national card games, together with Scopa and Briscola. It is also popular in the regions that were once controlled by the Italian predecessor states, such as Albania, Montenegro, coastal Slovenia and coastal Croatia. The Austrian game Trischettn as historically played in South Tyrol is also a derivative, albeit played with a 32-card German-suited deck. 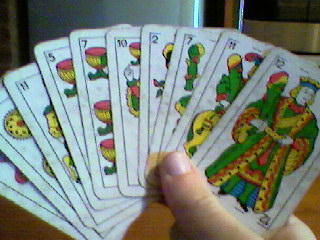 Tute is a trick-taking card game of the Ace-Ten family for two to four players. Originating in Italy, where it was known as Tutti, during the 19th century the game spread in Spain, becoming one of the most popular card games in the country. The name of the game was later modified by Spanish speakers, who started calling the game Tute. The game is played with a deck of traditional Spanish playing cards, or naipes, that is very similar to the Italian 40-card deck.

In cribbage, the probability and maximum and minimum score of each type of hand can be computed. 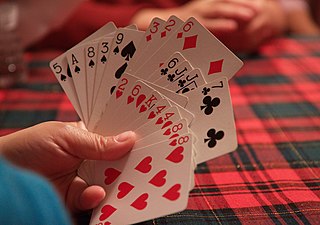 Penneech or Peneech, sometimes called Penicth, is an unusual historical English card game for two players played with hands of seven cards. The unique feature of this game is that the trump suit changes with each trick. Parlett describes it as a "jolly little two-hander". 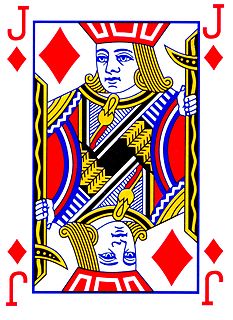 Costly Colours, sometimes just called Costly, is an historical English card game for two players and a more complex relative of Cribbage. The game "requires a moderate amount of skill in playing, and is well adapted to teach quickness in counting" but, unlike Cribbage, it does not use a 'crib'. In the 19th century it was described as "peculiar to Shropshire."

Queen Nazarene or Queen Nazareen is an old English card game recorded by Charles Cotton as early as 1674. It is an ancestor of Newmarket.