Houston Dynamo qualified as MLS Cup champions, and Gamba Osaka qualified as champions of the Japanese League Cup. Australia's A-League was represented by the loser of the minor semi final instead of the champion team. This was due to a scheduling conflict with the A-League Preliminary Final on February 17, followed by the Grand Final on February 24, which were moved back so as not to interfere with Australia's 2010 FIFA World Cup qualification campaign. [1] The fourth competitor was originally intended to be the SuperLiga champion, Pachuca, but the club reportedly declined to take part and their place in the competition was awarded to Los Angeles Galaxy.

Teams from China and Korea made their debut in the tournament in the 2009 edition, which was held at the Galaxy's Home Depot Center in Carson, California.

While no official statement has been issued, the tournament was not held in 2010 or 2011. In 2012, Aloha Stadium is scheduled to host the Hawaiian Islands Invitational, a preseason tournament that will also feature teams from Japan, Australia, the United States, and South Korea.[ citation needed ] A similar tournament, the Pacific Rim Cup, will be held in Honolulu in February 2018, featuring MLS and J League teams. [3]

The LA Galaxy, also known as the Los Angeles Galaxy, are an American professional soccer club based in the Los Angeles suburb of Carson, California. The Galaxy competes in Major League Soccer (MLS), as a member of the Western Conference. The club began play in 1996 as one of the league's ten charter members.

Aloha Stadium is a multi-purpose stadium located in Halawa, Hawaii, a western suburb of Honolulu. It is the largest stadium in the state of Hawaii. Aloha Stadium is home to the University of Hawaiʻi Rainbow Warriors football team. 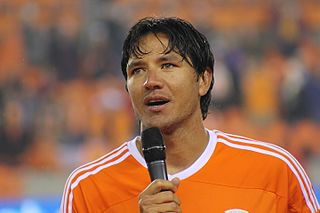 The 2008 Houston Dynamo season was the third season of the Houston club franchise. The Houston Dynamo were the defending back-to-back MLS Cup Champions, and sought to become the first club in Major League Soccer history to win three straight MLS Cups. 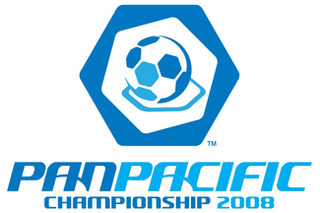 All time records for D.C. United against opponents in distinct competitive matches.

The Hawaiian Islands Invitational was an inter-confederation association football tournament that was founded in 2007, as the Pan-Pacific Championship. The tournament consisted of four teams, who contested a knock-out style competition that spanned three days.

The 2012 Hawaiian Islands Invitational was an inter-confederation association football tournament contested in February at Aloha Stadium, Hawaii between 4 different clubs from the United States, Japan, South Korea, and Australia. It is considered to be the successor to the now-defunct Pan-Pacific Championship.

The 2012 season is the 100th season of competitive soccer in the United States.

The Visit Tucson Sun Cup (formerly the Desert Cup, the Desert Diamond Cup and the Mobile Mini Sun Cup, is a preseason soccer tournament hosted by Phoenix Rising FC of the USL Championship and FC Tucson of USL League One. The tournament is sponsored by the Tucson Convention and Visitors Bureau, known as Visit Tucson. 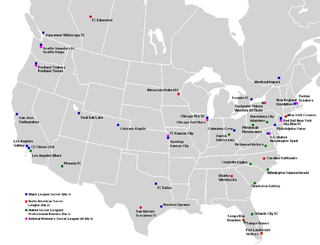 The 2013 season is the 101st season of competitive soccer in the United States.

The 2014 season is the 102nd season of competitive soccer in the United States.

The 2007 Columbus Crew season was the club's twelfth season of existence, and their twelfth consecutive season in Major League Soccer, the top flight of American soccer. Columbus also competed in the U.S. Open Cup but failed to qualify for the MLS Cup Playoffs. The season covered the period from November 9, 2006 to the start of the 2008.

The 2018 LA Galaxy season was the club's twenty-third season of existence, their twenty-third in Major League Soccer.

The 2018 Columbus Crew SC season was the club's twenty-third season of existence, and their twenty-third consecutive season in Major League Soccer, the top flight of American soccer. Columbus also competed in the U.S. Open Cup, and took part in the Pacific Rim Cup and Carolina Challenge Cup during preseason. The season covered the period from November 30, 2017 to the start of the 2019 Major League Soccer season.