From M.G Road, Pallimukku junction, one could move through Sahodaran Ayyappan Road and go over the south bridge take a deviation to the right to reach Panampilly Nagar. There are many by lanes in the place of which Panampilly Avenue is the main avenue close to the South Overbridge. Panampilly Nagar falls under Kadavanthra Janamythri Police Station and has its own Post office due to high density population apart from the main one at Kadavanthra.

This once barren and muddy locality with an area demarcated for cultivation, developed into a colony in the 1970s, with LIG (Low income Group) and MIG (Middle Income Group) residential houses coming up. Giri Nagar adjacent to Panampilly Nagar could be termed as the first colony in Kochi. Though Giri Nagar mostly remains the same, Panampilly Nagar gradually developed into a prestigious residential colony and is home to many apartment complexes as well. Builders such as ABAD Builders, [2] Skyline, Jains, Mather, RDS, Nagpal Builders, BCG Builders, SMS BUILDERS, URVI Concepts - Architects & Interior Designers have set up their apartments here. It is in demand as a residential area for its broad roads, clean & green environment and its parks. Panampilly Nagar Welfare Association (PNWA), an association of the residents, is actively involved in beautifying the area. It has various parks specially dedicated to Elderly citizens, Kids, youngsters etc., and the PNWA is enormously promoting the eco friendly- go green theme in the Panampilly Nagar premise. No wonder it attracts anyone and everyone to the place.

It is now gradually turning to be a favoured spot for offices, restaurants and business houses. A number of private companies have set up offices in Panampilly Nagar, mostly in the Main Avenue but they are now slowly expanding to the interior parts as well. The Regional Passport Office, BSNL office & the Malayala Manorama newspaper offices are all located in Panampilly Nagar. Further inside from the main avenue a deviation to the left takes you to Ambikapuram church (Church of Our Lady of Dolorus (1670)) dedicated to Mary of Sorrows and the Corporation crematorium.

Besides Panampilly Nagar Shopping Complex, a number of boutiques, lifestyle stores and restaurants serving Indian as well as such as Chinese and Italian cuisine have come up. The place also offers the services of doctors, advocates, consultants, beauty saloons, fitness centers and so on. Many public sector banks are available which includes Union Bank of India, State Bank of Travancore, Central Bank of India in Kallelil Building, Kadavanthra Jn, and other prominent banks like South Indian Bank, Axis Bank, HDFC Bank at MKS Towers, Kadavanthra are some of them within and in the neighborhood.

Panampilly Nagar & Junction was established in 1970s. This locality is fast getting commercialized. The villas on the main road are getting converted to commercial establishments and the people are moving to apartments located within the locality or moving to other suburbs. To cater to the residential community, prominent shopping areas developed all through Panampilly Avenue and S.A Road, Kadavanthra.

Besant Nagar is an upscale, exclusive residential neighbourhood in South Chennai, India. It is located along the coast of Bay of Bengal.

Greater Kailash is a residential area in South Delhi consisting of prime and luxurious real estate in several neighborhoods and multiple markets. It is divided into two zones, namely Parts 1 and 2, located around a section of the Outer Ring Road. It is highly sought after both in the commercial and residential categories. The neighborhood registered a 4.4% growth in residential sales and was recently featured alongside Green Park, Defense Colony, Vasant Vihar and Anand Niketan in the 2019 edition of Knight Frank 's quarterly report on prime luxury residential properties in various megacities around the globe.

Lajpat Nagar is a residential and commercial neighborhood in the South East Delhi district of Delhi. It was named in honor of Lala Lajpat Rai and is today most known for the Lajpat Nagar Central Market. This area is not to be confused with the Lajpat Nagar in Ghaziabad in the NCR region. 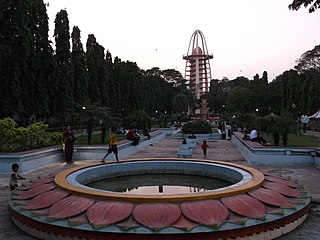 Anna Nagar, is a neighbourhood in the metropolitan city of Chennai, India. Named after former chief minister of Tamil Nadu C. N. Annadurai, it is located in the north-western part of Chennai and forms a part of the Aminjikarai taluk and the Anna Nagar Zone. It is one of the prime residential areas in Chennai and is home to several prominent doctors, lawyers and politicians. Real estate prices are among the highest in the city. A recent addition to the area is VR Chennai Mall, located near Shanthi Colony and Thirumangalam junction.

Padma Rao Nagar, sometimes also called PR Nagar, is a locality in Secunderabad, India, named after Diwan Bahadur Padma Rao Mudaliar. It was the early communities like Mudaliars who started developing the Secunderabad Cantonment commercially. Otherwise, Secunderabad had only large number of tents housing the troops of the British army as told by Mr. Luther in book Lashkar - 200 Years Of Secunderabad. The Mudaliars, who were camp followers of the British, made immense contributions for the growth of education and health care and explained the growth of the Secunderabad Club from a public room. It was previously known as Walker Town during the British raj.

Pammal is a suburban neighbourhood of Chennai, Tamil Nadu, India. It is located 22 kilometers from Chennai Central Railway Station. It is located next to Pallavaram on the western side. It lies on the western side of the Grand Southern Trunk Road and close to Chennai International Airport. It is 7 kilometers away from Tambaram. The neighborhood is served by Pallavaram Railway Station of the Chennai Suburban Railway Network. Pammal falls under Chengalpattu District. 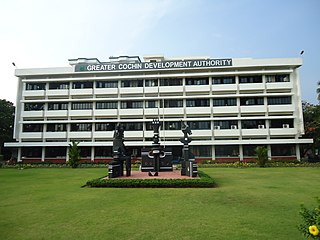 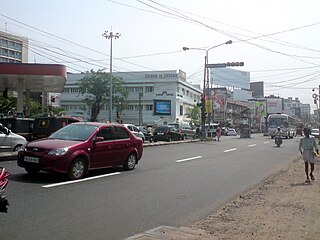 Ashok Nagar is a residential locality situated at the southern part of Chennai, Tamil Nadu, India. It was established in 1964. At the heart of this colony, stands the Ashok Pillar. This four lion head stump, resembles the one erected by king Ashoka during the 3rd century BCE at Sanchi.

The Old Allahabad City, at the south of Prayagraj Junction Railway Station, consists of neighborhoods like Chowk, Johnstongunj, Dariyabad, Khuldabad etc. and was in existence from the time of Akbar. Some magnificent structures erected in this era consist of the Khusro Bagh and the Allahabad Fort. In the north of Railway Station, the New Allahabad City consists of neighborhoods like Lukergunj, Civil Lines, Georgetown, Tagoretown, Bharadwaj Puram, Ashok Nagar, Mumfordgunj etc., which are relatively new and were built during the British rule. These neighborhoods reflect British architecture like the All Saints Cathedral, Alfred Park and Allahabad High Court. Newer residential areas include neighborhoods like Kareli and suburbs like Naini Jhunsi and Manauri bajar. 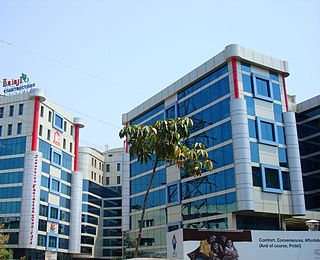 Somajiguda is a Commercial Centre of Hyderabad located on either sides of Raj Bhavan Road. It started as a peaceful residential locality but slowly has transformed into a modern business centre in Hyderabad, Telangana, India. It is a hub of commercial activity with many jewellery, automobile and banking establishments running their businesses from here. Popular landmarks are Raj Bhavan, The Park and Yashoda hospital. Somajiguda has also gained importance because of its proximity to city centres such as Begumpet, Punjagutta and Khairtabad. The official residence of Governor of State of Telangana - the Raj Bhavan is in Somajiguda.

Sanathnagar is an industrial and residential area in Hyderabad City, Telangana, India, and one of the most densely populated suburbs in India.

Nizampet is a satellite city of Hyderabad and a municipal corporation situated in Bachupally mandal, Medchal-Malkajgiri district of Telangana, India. It is administered as Nizampet Municipal Corporation.