Thoppumpady is a region in the city of Kochi in the state of Kerala, India. It connects the tourist destinations Mattancherry, Fort Kochi, Palluruthy and Willingdon Island.

Thoppumpady is about 9 km away from the South Railway Station. It has bus services to particular locations in the city.

It is connected to the Willington Island via the Mattancherry Bridge built by the British in the pre-independence period popular among the local community as "Old Harbour Bridge" or "Pazhaya Thoppumpady Paalam" in the local dialect. This bridge is a classic work of the British engineering division. The centre of the bridge can be raised to let bigger boats pass under it. The new Mattancherry bridge built approximately one kilometer near it now carries most of the traffic from Thopumpady to the Willington Island. After a renovation by the Cochin Port Authority in 2015 the Old Harbour Bridge was re-opened for the public. However, due to safety concerns, government authorities permit only light motor vehicles to cross the bridge.

Thoppumpady is 3 km from Mattancherry and 5 km from Fort Kochi. Old NH 47 passes through Thoppumpady. 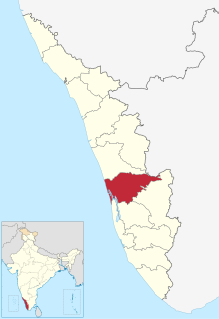 Willingdon Island is the largest artificial island in India, which forms part of the city of Kochi, in the state of Kerala. Much of the present Willingdon Island was claimed from the Lake of Kochi, filling in dredged soil around a previously existing, but tiny, natural island. Willingdon Island is significant as the home for the Port of Kochi, as well as the Kochi Naval Base of the Indian Navy, Plant Quarantine station, Custom House Cochin and Central Institute of Fisheries Technology, a constituent unit of Indian Council of Agricultural Research.

Vypin or Vypeen is one of the group of islands that form part of the city of Kochi, in the South Indian state of Kerala. Vypin is One of the densely populated islands in Asia. The island is about 27 kilometres (17 mi) long and is connected to mainland Kochi by a series of bridges known as the Goshree bridges, which start at Kalamukku in Vypin, touch other two islands and then finish at Marine Drive covering a total distance of around 3 km (1.9 mi). 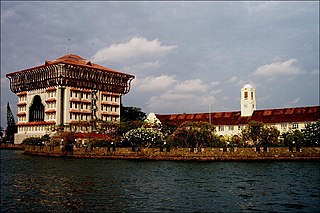 Cochin Port or Kochi Port is a major port on the Arabian Sea - Laccadive Sea – Indian Ocean sea-route in the city of Kochi and is one of the largest ports in India. The port lies on two islands in the Lake of Kochi: Willingdon Island and Vallarpadam, towards the Fort Kochi river mouth opening onto the Laccadive Sea. The International Container Transshipment Terminal (ICTT), part of the Cochin Port, is the largest container transshipment facility in India.

Kochi is a small city located in the Ernakulam District in the Indian state of Kerala. Trivandrum which is the capital and largest city of Kerala is 200 km away from Kochi.

Kochi is a city in the Indian state of Kerala. Kochi is located in the district of Ernakulam. Old Kochi loosely refers to a group of islands including Willingdon Island, Fort Kochi, Mattancherry and Mundamveli In Mundamveli there is an Ancient Portugal Significant church named St.Louis church and the Biggest celebration of this church is related to the feast of St.Jacob which is celebrate every year on 30 December. Lakh of people even from defferent parts of India. Today Kochi includes Ernakulam, old parts of Kochi, Kumbalangi, and outlying islands. For many centuries up to and during the British Raj, the city of Kochi was the seat of the eponymous princely state — the Kingdom of Cochin, which lay between 9.48° and 10.50° latitude and 76.5° and 76.58° E longitude.

Mattancherry Bridge is a bridge in Kochi, Kerala, India. It connects mainland Cochin to Willingdon Island. This bridge was constructed in 1998; succeeding the previous bridge of the same name, which was built in 1940. The old bridge now carries only two and three wheelers.

Nettoor is a picturesque region in the city of Kochi. It is around 5 km from Vytilla Junction and around 8 km from Ernakulam Junction Railway Station. Nettoor is located on Panangad Island and is a part of Maradu Municipality.

Mahatma Gandhi Road, popularly known as M. G. Road, is the main artery as well as the commercial high street of the city of Kochi, in the state of Kerala, India. The road lies north-south with its boundaries at the Venduruthy bridge, Thevara in the south, and the Madhava Pharmacy Junction in the north, where it intersects the Banerji Road. The road was earlier part of the NH 47A and was later handed over to Kochi Municipal Corporation. The highway was earlier known as Seventy Feet road. The total distance of the road is 4 kilometres (2.5 mi).

Sahodaran Ayyappan Road, popularly known as S.A Road is one of the most important and the second main arterial road of CBD Kochi city{after the M.G Road}, it is supposed to be the busiest and most congested road in the city of Kochi ,which run in east-west direction and the shortest road connecting the two main iconic junctions in the city. The road connects the MG Road in west with Vyttila Junction & Hub in east and continues further as Tripunithura Road that connects to Tripunithura,hence termed as the back bone road of Kochi.

This is a list of areas and neighbourhoods in Cochin by region..

Seaport-Airport Road is supposed to be a four-lane, 30 km (19 mi) highway from Cochin seaport to the Cochin International Airport developed to improve the transport infrastructure in the city of Kochi, India. This highway passes through the Cochin Special Economic Zone and connect such major industrial units as HMT, FACT, and Kochi Refineries as also the various oil terminals at Irumpanam and also boost the flow of cargo traffic both from the port and the airport. The District Headquarters is located on this road. The IT Expressway to Infopark is starting from this road. The 13-km road constructed in the first phase acting as a by-pass to the NH 47 within the Kochi city limits. Petroleum tankers from Irumpanam oil terminals can now move north up to Kalamassery without entering the core city areas. To ensure a smooth and durable road, natural rubber modified bitumen (NRMB) is used.

Edakochi is one of the oldest localities in south Kochi, India. It is located on the southern banks of the Kochi Backwaters. It is bounded by the Palluruthy to the west, Aroor to the south and Kumbalam to the east.