Perth Airport is an eastern suburb of Perth, the capital city of Western Australia. Its local government areas are the City of Belmont, the City of Swan (north) and the City of Kalamunda (east). It is located approximately 12 km east of the central business district. [2]

Perth Airport is home to a Bureau of Meteorology weather station. Perth Airport has a Mediterranean climate (Köppen climate classification Csa), like the rest of Perth. The highest recorded temperature in the Perth metropolitan region is 46.7 °C (116.1 °F), recorded at Perth Airport on 23 February 1991.

Eucla is the easternmost locality in Western Australia, located in the Goldfields-Esperance region of Western Australia along the Eyre Highway, approximately 11 kilometres (7 mi) west of the South Australian border. At the 2016 Australian census, Eucla had a population of 53. 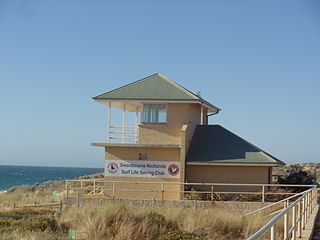 Greenhill is a suburb of Adelaide located about 9.3 kilometres (5.8 mi) east of the city centre in the foothills of the Adelaide Hills. Its boundaries were created in October 2001 in respect of the “long established name” with some land being moved into the adjoining suburb of Waterfall Gully in July 2002. The suburb includes Greenhill Recreation Park and the western slopes of Mount Lofty. Greenhill Creek flows through Waterfall Gully and feeds into First Creek. 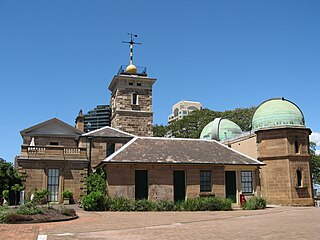 The climate of Sydney is humid subtropical, shifting from mild and cool in winter to warm and hot in the summer, with no extreme seasonal differences as the weather is moderated by proximity to the ocean, although more contrasting temperatures are recorded in the inland western suburbs. Despite the fact that there is no distinct dry or wet season, rainfall peaks in the first few months of the year and is at its lowest just around the middle of the year, though precipitation can be erratic throughout the year. Precipitation varies across the region, with areas adjacent to the coast being the wettest. The city receives around 20 thunderstorms per year. According to the Bureau of Meteorology, Sydney falls in the temperate climate zone which has warm to hot summers and no dry season. Sydney's plant hardiness zone ranges from zone 11a to 9b throughout the metropolitan area.

Gosnells is a suburb located within the City of Gosnells. Gosnells is approx. 20 kilometres south-east of the Perth central business district. It contains the Gosnells town centre which includes the Council offices, library and the Gosnells Railway Station.

Archerfield is a mixed-use southern suburb in the City of Brisbane, Queensland, Australia. In the 2016 census, Archerfield had a population of 544 people. 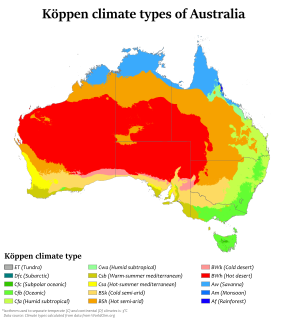 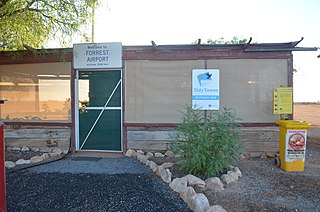 Forrest is a small settlement and railway station on the Trans-Australian Railway in Western Australia. At the 2016 census, no people lived in Forrest, having been recorded at 18 individuals during the 2006 census. 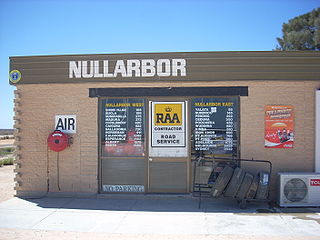 Nullarbor is a locality in the Australian state of South Australia located 295 kilometres (183 mi) to the west of the town of Ceduna in the western part of the state immediately adjoining the border with Western Australia. 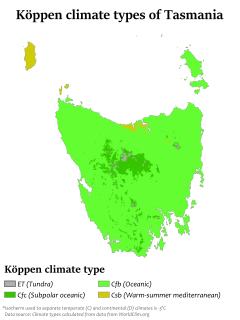 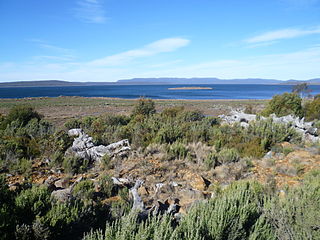 Liawenee is a small town in Tasmania, Australia built near Great Lake and the River Ouse, and was established on 11 June 1920. The town is an ex-Hydro village and now a residence for Inland Fisheries Services (IFS) and a Tasmania Police station. It is known for its exceptional fishing at nearby Great Lake and hosts several trout fishing events. 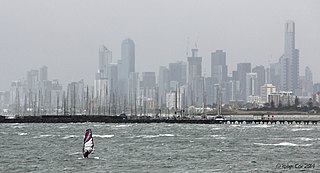 Melbourne, the state capital of Victoria and second largest city in Australia, has a temperate oceanic climate and is well known for its changeable weather conditions. This is mainly due to Melbourne's geographical location. This temperature differential is most pronounced in the spring and summer months and can cause strong cold fronts to form. These cold fronts can be responsible for all sorts of severe weather from gales to severe thunderstorms and hail, minor temperature drops, and heavy rain. The city experiences little humidity in summer, except at the end of hot spells following thunderstorms and rain.

Brisbane has a humid subtropical climate with year-round period with warm to hot temperatures. Brisbane generally experiences 3 months of mild cool winter from June to August.