Postal codes in Denmark are determined by a four digit system that was implemented 1967. The only exceptions are five special purpose 3-digit codes. The self-governing territory of Greenland [1] is part of the Danish system (39xx). Historically, the Faroe Islands also formed part of the Danish postal code system using the 38xx range and the prefix "FR", but this was changed to a new format consisting of a three-digit code and the country code "FO", with FR 3800 Tórshavn becoming FO-110 Tórshavn. [2]

New regulations add the country code DK to the postal codes, but in practice it is most often omitted.

The code is written before the city name.

Udenrigsministeriet Asiatisk Plads 2 1448 København K - not necessarily with the DK - Be aware that the DK or Denmark must be used when mailed from abroad.

The postal codes follow a geographic pattern and most Danes can tell which region an address belongs to based on the postal code alone.

Copenhagen is the capital and most populous city of Denmark. As of 1 January 2021, the city had a population of 799,033. It forms the core of the wider urban area of Copenhagen and the Copenhagen metropolitan area. Copenhagen is situated on the eastern coast of the island of Zealand; another portion of the city is located on Amager, and it is separated from Malmö, Sweden, by the strait of Øresund. The Øresund Bridge connects the two cities by rail and road. 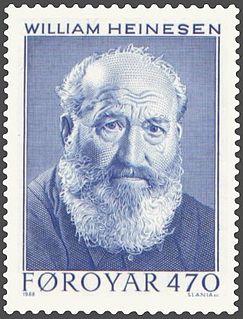 Vehicle registration plates in Denmark normally have two letters and five digits and are issued by authorities. Plates can be obtained at authorized car dealers, vehicle inspection stations or official registration centers The combination is simply a serial and has no connection with a geographic location, but the digits have number series based on vehicle type.

Denmark generally uses an eight digit closed telephone numbering plan. Subscriber numbers are portable with respect to provider and geography, i.e. fixed line numbers can be ported to any physical address in Denmark.

Cobe is a Copenhagen-based architectural firm owned and managed by architect Dan Stubbergaard. As of 2020, the office has 150 employees and is involved in a large number of projects throughout Europe and North America within urban planning, architecture, landscape architecture and interior design.

Vester Voldgade is a street in Copenhagen, Denmark which runs from Jarmers Plads to the waterfront between Frederiksholms Kanal and Langebro, passing the City Hall Square on the way.

Toldbodgade is a street in central Copenhagen, Denmark. It extends north from Nyhavn at the Nyhavn Bridge, continuing Holberggade, passes Sankt Annæ Plads after just one block, and continues straight until it reaches West India Warehouse where it makes a sharp left turn which connects it to Amaliegade, its parallel street, at the rear of the Design Museum.

Christianshavns Torv is the central public square of the Christianshavn neighborhood in Copenhagen, Denmark. It is situated at the intersection of Torvegade and Christianshavn Canal, roughly at the center of the area.

The City Campus is one of the University of Copenhagen's four campuses in Copenhagen, Denmark. It is home to the Faculty of Social Sciences and parts of the Faculty of Health and Medical Sciences and the Faculty of Science. The main campus area, the Center for Health and Society, is situated on Øster Farimagsgade, across the street from the University's Botanical Garden, which is also part of the campus area. The City Campus also comprises a building on Øster Voldgade and the university headquarters on Frue Plads.

Hauser Plads is a public square in the Old Town of Copenhagen, Denmark. It is separated from the larger, more well-known square Kultorvet by the former Copenhagen Central Library Building. A landscaped playground and Copenhagen Municipality's underground Cleaning Facilities Centre occupies most of the site since a renovation in 2011.. 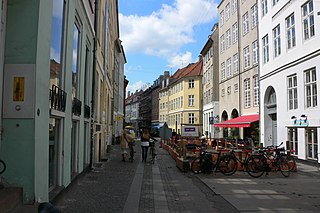 Strædet is the colloquial name of a popular shopping and café street in the Old Town of Copenhagen, Denmark, linking Højbro Plads on Strøget at its eastern end with Regnbuepladsen next to City Hall to the west. The official street names are Læderstræde, Kompagnistræde and Farvergade. The shops along the street are generally smaller and more eclectic than the flagship stores on neighbouring Strøget. It is dominated by art galleries and antique shops. It is known for its rich gay culture with lgbt-citizens, shops, bars, restaurants and coffeehouses.

(Kongelige) Grønlandske Handels Plads is a waterfront area at the end of Strandgade in the northwestern corner of the Christianshavn neighbourhood of Copenhagen, Denmark. The area is bounded by the Trangraven canal to the north, Christianshavn Canal to the east, Krøyers Plads to the south and the main harbor to the west. The waterfront is also known as Nordatlantens Brygge. It is named for the Royal Greenland Trading Department and was for more than 200 years a hub for Danish trade on Greenland, Iceland and the Faroe Islands. The most notable building is North Atlantic House, an 18th-century warehouse now used as a cultural centre for the North Atlantic area. 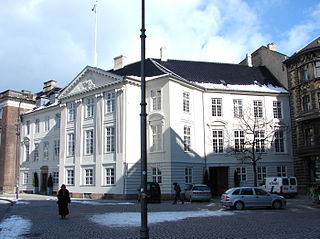 The Harsdorff House is a historic property located on Kongens Nytorv in central Copenhagen, Denmark. It was built by Caspar Frederik Harsdorff in 1780 and was in the same time to serve as inspiration for the many uneducated master builders of the time. The Ministry of Foreign Affairs was based in the building from 1864 to 1923.

Haraldsgade is an approximately 1.1 km long street in the outer Nørrebro and Østerbro districts of Copenhagen, Denmark. It runs from Tagensvej in the southwest to Lyngbyvej in the northeast. Skjolds Plads Station, a station on the Copenhagen Metro City Circle Line, is located at the beginning of the street. The station takes its name after Skjolds Plads, a small square located off the east side of the street. The southwestern end of the street was closed to through traffic in connection with the opening of the metro station.