The Reduviinae are a subfamily of the reduviid assassin bugs. [1] [2] Many members of the subfamily are nocturnal and their lifecycles are generally poorly known. This subfamily is suspected not to be monophyletic. 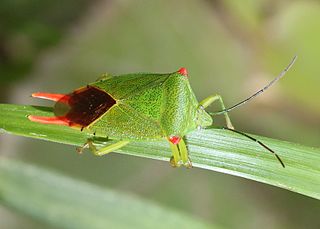 The Pentatomoidea are a superfamily of insects in the Heteroptera suborder of the Hemiptera order. They are commonly referred to as shield bugs, chust bugs, and stink bugs. As Hemiptera, they share a common arrangement of sucking mouthparts.

Coreidae is a large family of predominantly sap-suckling insects in the Hemipteran suborder Heteroptera. The name "Coreidae" derives from the genus Coreus, which derives from the Ancient Greek κόρις (kóris) meaning bedbug. 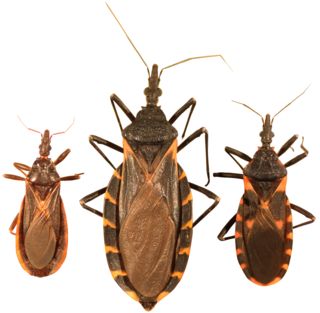 Triatoma is a genus of assassin bug in the subfamily Triatominae. The members of Triatoma are blood-sucking insects that can transmit serious diseases, such as Chagas disease. Their saliva may also trigger allergic reactions in sensitive individuals, up to and including severe anaphylactic shock.

Pentatominae is a subfamily of Pentatomidae, a family of shield bugs. This subfamily is the largest one within the pentatomidae, having 4937 species. classified in 938 genera. Species on this subfamily are phytophages and several of them have been considered agricultural pests. Some invasive pentatomines such as Halyomorpha halys and Bagrada hilaris have been considered household pests, even inflicting adventitious bites. Higher systematics of the group has been revised by Rider et al.

Alydidae, commonly known as broad-headed bugs, is a family of true bugs very similar to the closely related Coreidae. There are at least 60 genera and 300 species altogether. Distributed in the temperate and warmer regions of the Earth, most are tropical and subtropical animals; for example Europe has a mere 10 species, and only 2 of these occur outside the Mediterranean region. 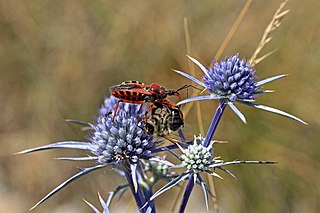 The Harpactorinae are a large subfamily of the Reduviidae. About 300 genera and 2,000 species worldwide have been described. Some of the species of the genera Zelus, Pselliopus, Sinea, and Apiomerus are of interest as biological pest control agents.

The Ectrichodiinae are a subfamily of assassin bugs (Reduviidae) known for specializing on millipedes as prey. The group comprises more than 600 species in about 115 genera, making it a fairly large subfamily. The bugs are also known for their aposematic coloration, often brightly colored metallic blue, red, or yellow. 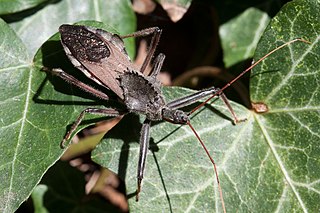 Harpactorini is a tribe of the Harpactorinae. This group is the most diverse of the entire assassin bug family, with 51 genera recognized in the Neotropical Region and 289 genera and 2003 species overall.

Camptibia is a genus of assassin bugs in the subfamily Harpactorinae. It is reported from China. The lone species is Camptibia obscura.

Caecina is a genus in the subfamily Ectrichodiinae of Reduviidae ; 16 species have been described, all of them are located in Eastern Asia.

Rhynocoris is a genus of assassin bug, family (Reduviidae), in the subfamily Harpactorinae.

The Stenopodainae are a subfamily of Reduviidae. Many species of this subfamily are endemic to tropical rainforests, and some smear their fore legs with sticky, plant-derived resin, to aid in prey capture.

The Peiratinae are a subfamily of assassin bugs (Reduviidae) known as corsairs. The subfamily has a worldwide distribution, but concentrated in tropical areas. About 30 genera with 350 species are described.

Tiarodes is a genus of assassin bugs. Eighty-five species are known. 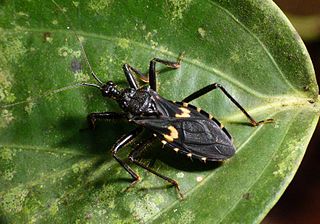 Acanthaspis is a genus of assassin bugs. Members of the genus are known to disguise themselves by attaching bits of debris to aid in camouflage.

Pygolampis is a genus of assassin bugs in the family Reduviidae. Five species have been described from Vietnam, and at least eleven worldwide.

LopodytesRondani 1867 is a genus in the family Reduviidae, the assassin bugs. Members of the genus have been unofficially assigned the common name Grass Assassin bugs, but generally this name remains meaningful only to naturalists, because these insects have been too well camouflaged to raise robust public awareness.

Alydinae is a subfamily of broad-headed bugs in the family Alydidae. There are about 24 genera and more than 140 described species in Alydinae. 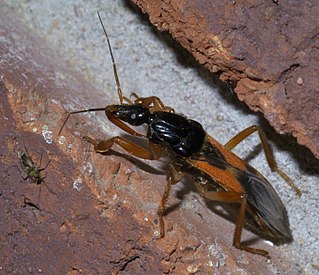 Sirthenea is a genus of corsairs in the family Reduviidae. There are at least 40 described species in Sirthenea.