Harrison is best known for winning the gold medal in the 800 metres at the 1985 European Indoor Championships. He represented England in the 1500 metres event, at the 1986 Commonwealth Games in Edinburgh, Scotland. [2] [3] [4] 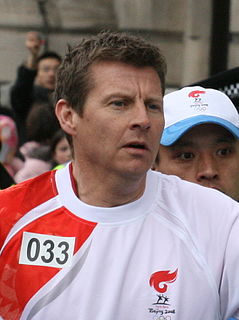 Derrick Brown is a male retired English athlete who specialized in the long jump. His career best jump was 8.00 metres, and his best international result was a fifth place at the 1986 Commonwealth Games.

Matthew Stewart "Matt" Yates is a male retired English athlete who specialised in the middle-distance events.

Ann Margaret Griffiths is a retired English athlete who competed in middle-distance events. In the 800 meters, she won a silver medal at the 1990 Commonwealth Games and finished seventh in the final at the 1991 World Championships, before going on to represent Great Britain in the 1500 metres at the 1992 Summer Olympics in Barcelona.

Sarah McDonald is an English middle-distance runner specialising in the 1500 metres. Sarah was born in Newcastle upon Tyne and attended the Royal Grammar School. She represented her country at the 2017 World Championships. In addition, she reached the final at the 2016 European Championships and 2017 European Indoor Championships. She became British Indoor Champion in 2017 over 1500m. In 2016 she became the English 800m Champion. At the European Cross Country Championships in 2017 she won team gold in the inaugural mixed relay, where she ran the fastest leg of the day. She represented England in the 2018 Commonwealth Games in Gold Coast reaching the 1500m Final. In 2019, she became British Champion over 1500m and also reached the Semi-Final of the World Championships in Doha. 2019 she won gold at the European Cross-Country in the mixed relay.