Rogers Morgan Govender MBE (born 29 June 1960) is a South African Anglican priest. Since 2006, he has been Dean of Manchester. He is a sixth generation South African and he was England's first black cathedral dean.

Govender was born on 29 June 1960 in Durban, Province of Natal, South Africa. [1] He is a sixth generation South African of South Indian ancestry. [2] In 1983, he entered St Paul's College, Grahamstown, an Anglican theological college, to train for ministry in the Church of the Province of Southern Africa. [3]

Govender was ordained deacon in 1985 and priest in 1986. [3] He was priest in charge at St Mary's Church, Greyville, Durban from 1988 until 1993 when he was transferred to St Matthew's Hayfields, Pietermaritzburg where he was rector and subsequently St Thomas's Musgrave Road. He graduated from the University of Natal with a Bachelor of Theology (BTh) degree in 1997. [3] He emigrated to the United Kingdom in 2002 after 15 years of service in the Diocese of Natal.

On arrival in England, he was priest-in-charge of Christ Church, West Didsbury in South Manchester and Area Dean of Withington. In 2006 he was appointed Dean of Manchester. [3] The Dean is based in Manchester, England and is the head of the Chapter of Manchester Cathedral. At the time of his appointment was England's first black cathedral dean, and the third most senior black or Asian churchman in the Church of England. His aim is to accommodate people of all races in the inner city.

Govender filled in for Tom Hanks in a spoofed Da Vinci Code movie poster in 2006, [4] to promote a "Da Vinci Code Mass" at the cathedral intended to address issues raised by the controversial book, and the movie based on it. The mass was inspired by a poll revealing that the book and movie may have undermined public trust in the Catholic Church. [5]

Govender is married to Celia. They have two children, Jonathan and Claire. [2]

In 2018 Govender was awarded an MBE for his services to interfaith relations and to the community in Manchester. [6] 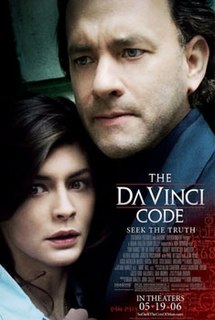 The Da Vinci Code is a 2006 American mystery thriller film directed by Ron Howard, written by Akiva Goldsman, and based on Dan Brown's 2003 best-selling novel of the same name. The first in the Robert Langdon film series, the film stars Tom Hanks, Audrey Tautou, Sir Ian McKellen, Alfred Molina, Jürgen Prochnow, Jean Reno and Paul Bettany. In the movie, Robert Langdon, a professor of religious symbology from Harvard University, is the prime suspect in the grisly and unusual murder of Louvre curator Jacques Saunière. On the body, the police find a disconcerting cipher and start an investigation. Langdon escapes with the assistance of police cryptologist Sophie Neveu, and they begin a quest for the legendary Holy Grail. A noted British Grail historian, Sir Leigh Teabing, tells them that the actual Holy Grail is explicitly encoded in Leonardo da Vinci's wall painting, The Last Supper. Also searching for the Grail is a secret cabal within Opus Dei, an actual prelature of the Holy See, who wish to keep the true Grail a secret to prevent the destruction of Christianity. 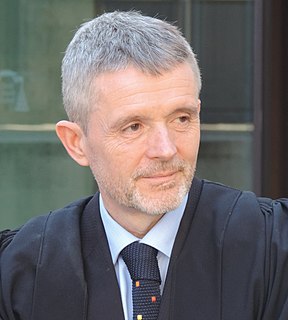 Martyn William Percy is a British Anglican priest and theologian. He has been the Dean of Christ Church, Oxford, since October 2014 and was previously Principal of Ripon College Cuddesdon, Oxford.

The 2006 video game Resistance: Fall of Man, developed by Insomniac Games, published by Sony Computer Entertainment and released for the PlayStation 3 video game console, features combat scenes that take place within a virtual representation of Manchester Cathedral in England set in an alternate history. It was released on 23 March 2007 in the United Kingdom. The use of images of the cathedral caused controversy with the leaders of the Church of England, which claimed its depiction to be desecration and copyright infringement, and that it was inappropriate of Sony to allow players to fire guns in a city with a gun problem. They have made several legal threats against Sony. They intended to make several demands of Sony, including an apology, a substantial donation, complete withdrawal of the game or modifying the segment featuring the interior of the cathedral, and financial support of Manchester groups trying to reduce gun crime in the city.

Kessie Govender was a pioneering voice in South African protest theatre, a playwright, actor and theatre director, who founded the Stable Theatre, a Durban-based theatre company in 1970 and is most known for his play, Working Class Hero (1979) and The Shack (1979).

Michael Nuttall is an eminent former South African Anglican bishop and author in the last third of the 20th century.

Robert David Silk is an English priest of the Roman Catholic Church. He was formerly an Anglican bishop and was the Bishop of Ballarat in the Anglican Church of Australia.

Frances Elizabeth Fearn Ward is an Anglican priest and theologian. She served as Dean of St Edmundsbury from 2010 to 2017.

Peter Bingham Hinchliff was a South African Anglican priest and academic. He was the Regius Professor of Ecclesiastical History at the University of Oxford from 1992 to 1995.

Richard David Fenwick is an Anglican prelate, and was Bishop of St Helena from 2011 to 2018.

Nicholas James Henshall is a British Anglican priest, who has been Dean of Chelmsford since 2014.

Dino Gabriel is an Italian-born Anglican bishop of Natal in South Africa. He has a Swazi wife and they have four children. He is a fluent speaker of Zulu.

Rogers is a masculine given name which may refer to: