Rovaniemen Palloseura (RoPS) is a football club founded in 1950 and based in Rovaniemi, Finland. In 2019 RoPS participated in the Finnish Premier Division, ( Veikkausliiga ) marking their 32nd season in the top flight (previously called "Veikkausliiga") since 1981. The club plays home games at the Rovaniemen Keskuskenttä in the Arctic Circle of Lapland. The closest affiliated team is RoPS/2 from Kakkonen who participates in the third tier of Finnish football.

RoPS have won the Finnish Cup on two occasions, in 1986 and 2013, and were runners-up in 1962. They placed third in the Finnish Premier Division in 1988 and 1989, before finishing as runner-up in 2015, losing out on the title by 1 point to eventual champions SJK. The club's most notable international achievement was reaching the quarter-finals of the European Cup-Winners' Cup in 1987–88 against Marseille.

Throughout the 2000s, RoPS became infamous for suspected involvement in match fixing.

On July 19, 2011, the Rovaniemi Court of Appeal convicted Perumal and nine RoPS players of match-fixing. Altogether 24 games had been manipulated, and the intended score had been achieved in 11 of them. Perumal was sentenced to two years in prison and ordered to return 150,000 euros deemed to be match-fixing profits. The bribes ranged from 500 euros offered to one player to a total of 80,000 euros offered to eight players. The highest total of bribes for one individual was slightly over 40,000 euros. The players received suspended sentences. The sentenced players were six Zambian and two Georgian players: Godfrey Chibanga, Chileshe Chibwe, Francis Kombe, Stephen Kunda, Christopher Musonda, Chanda Mwaba, Nchimunya Mweetwa, Pavle Khorguashvili, and Valter Khorguashvili. [2]

Rovaniemi Football Academy (RFA) [4] is the reserve team of RoPS. The team plays in Kakkonen in 2020 season. It is coached by Aleksi Tanner.

Patrick Bantamoi is a Sierra Leonean-Finnish former footballer who played as a goalkeeper.

Zeddy Saileti is a former Zambian football striker and football coach, currently the manager of Nkana Football Club in Kitwe. A good goalscorer, he formed part of the Zambia squad that reached the final of the 1994 African Nations Cup, eventually losing 2-1 to Nigeria. Saileti was born and raised in a family of eleven children. His father was a mine worker and his mother a home school teacher. His little brother Derek Saileti is also a football player. Saileti used to play several sports while young - mostly football and tennis. The Luanshya mining company paid for the gear. Saileti has four daughters, two of which live in Zambia.

Nchimunya Mweetwa is a Zambian football Striker for Nico United.

Stephen Kunda is a Zambian football central defender who is currently a free agent. He played for Power Dynamos F.C. in his home country before moving to Finland. Kunda can also play as a defensive midfielder. Kunda had a contract with RoPS until the end of season 2012.

Jackson "Jack" Chileshe Chibwe is a retired Zambian football midfielder. A versatile forward, Chibwe can play either as a winger or attacking midfielder / second striker. Despite his short stature, Chibwe is known to be a good header of the ball.

FC Santa Claus is a football club from Rovaniemi, Finland. The club has played as high as the third tier Kakkonen, where they have played a total of 14 seasons. They were nearly promoted to the second-tier Ykkönen but lost their promotion playoff match to HIFK in 2010. The club plays at the Keskuskenttä Stadium, which seats 4,000 spectators, of which 2,800 are covered, which they share with Rovaniemen Palloseura (RoPS), who played in the top tier Veikkausliiga, until their relegation at the end of the 2020 season. 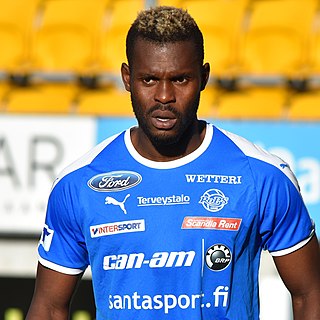 Guirlain Désiré Wato Kuaté is a professional footballer who plays as a defensive midfielder.

The 2016 season is RoPS's 4th Veikkausliiga season since their promotion back to the top flight in 2012.

Timo Stavitski is a Finnish professional footballer who plays as a forward for MVV Maastricht on loan for Stade Malherbe Caen.

The 2017 season is RoPS's 5th Veikkausliiga season since their promotion back to the top flight in 2012.

The 2018 season is RoPS's 6th Veikkausliiga season since their promotion back to the top flight in 2012.

The 2019 season is Seinäjoen Jalkapallokerho's 12th competitive season, and sixth in the Veikkausliiga.

The 2019 season was RoPS's 7th Veikkausliiga season since their promotion back to the top flight in 2012. RoPS finished the season in 10th position, reached the Quarterfinals of the Finnish Cup where they were knocked out by KPV and the First Qualifying Round of the UEFA Europa League where they were beaten by Aberdeen.

The 2020 season is RoPS's 7th Veikkausliiga season since their promotion back to the top flight in 2012.