A safety bicycle (or simply a safety) is a type of bicycle that became very popular beginning in the late 1880s as an alternative to the penny-farthing ("ordinary") and is now the most common type of bicycle. Early bicycles of this style were known as safety bicycles because they were noted for, and marketed as, being safer than the high wheelers they were replacing. [1] Even though modern bicycles use a similar design, the term is rarely used today and is considered obsolete outside circles familiar with high wheelers. [2]

The term 'safety bicycle' was used in the 1880s for any alternative to the penny-farthing. The front and rear wheel were not necessarily the same size. [3] Later historians began to use the term in a more restricted way, for the design that was a direct ancestor to most modern bicycles. [4] [5]

"Diamond frame" is also sometimes used as a term for safety bicycles, even though this technically only refers to a certain type of safety bicycle. The retronym "upright bicycle" is used to distinguish the style from recumbent bicycles.

The first bicycle to be called a "safety" was designed by the English engineer Harry John Lawson (Henry Lawson) in 1876, [6] although other bicycles which fit the description had been developed earlier, such as by Thomas Humber in 1868. [7] Unlike, with penny-farthings, the rider's feet were within reach of the ground, making it easier to stop. The pedals powered the rear wheel, keeping the rider's feet safely away from the front wheel. The original treadle bicycle model used treadles to transfer power to the rear wheel, while the later 1879 model used a chain drive, an important new technology that had previously only been used on tricycles. Lawson's safety failed to catch on, perhaps because of its increased cost, weight and complexity compared to the penny-farthing. [6] One other variation that appeared at about the same time is the dwarf, exemplified by the Kangaroo, and with a chain-driven front wheel.

By 1885, the safety bicycles cataloged in Henry Sturmey's Indispensable Handbook to the Safety Bicycle included seven with lever front-drives, 44 with geared front-drives, and only nine with chain rear-drives. [4] [5] In that same year, John Kemp Starley (J. K. Starley) came out with the first commercially successful safety bicycle he named the Rover. [8] [9] The first modern bicycle, was heavier and more expensive than penny-farthings, but lighter and cheaper than tricycles of the day. [10] In its original form it used indirect steering; later, direct steering was adopted and the bicycle proved to be a hit. [11]

The Overman Wheel Company, founded 1882, was the first manufacturer of safety bicycles in the United States, in their factory complex in Chicopee, Massachusetts. [12] Following their creation in England, Overman rushed a safety bicycle to production before the end of 1887. [13] Overman was known for making all-steel bicycles with no cast metal parts. [12] The Overman Victor bicycle was said to be of higher quality and lower weight than other bicycles of its time. [12] By 1893, the Overman factory made the complete bicycle, including tyres, saddles, rims, etc. [14]

The safety bicycle was a big improvement on the previous penny-farthing design which it replaced. The chain drive, coupling a large front sprocket (the chainring) to a small rear sprocket (the sprocket) to multiply the revolutions of the pedals, allowed for much smaller wheels, and replaced the need for the large, directly pedaled front wheel of the penny-farthing. The smaller wheel gave a harsher ride; [15] once pneumatic tires were developed and replaced the previously used solid ones, this disadvantage was no longer an issue. [16]

With the center of mass low and between the wheels, rather than high and over the front hub, the safety bicycle greatly diminished the danger of "taking a header" or long fall over the handlebars. This made braking more effective and cycling, previously the reserve of spry, daring young men, safer, and therefore much more popular, especially for women.

Compared with the tricycles of the time, popular with riders less willing to take risks, the safety bicycles were lighter, mechanically more simple, and less expensive.

Its popularity soon grew to be more than the penny-farthings and tricycles combined and caused the bike boom of the 1890s. [17]

Safeties are now characterized by having two wheels of identical –or nearly identical –size, and a chain-driven rear wheel. The most popular form of the safety bicycle frame, consisting of two triangles, is known as a diamond frame. A similar but different frame used in safety bicycles is the step-through frame.

Despite the enormous variety of modern bicycles, recumbent bicycles are the only major variety of bicycle which do not use this same basic design. 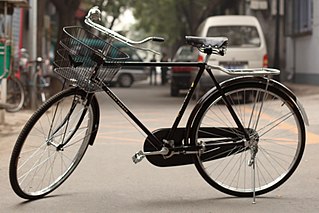 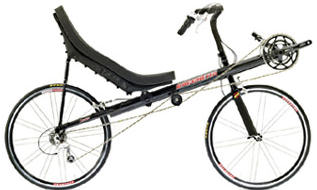 A recumbent bicycle is a bicycle that places the rider in a laid-back reclining position. Most recumbent riders choose this type of design for ergonomic reasons: the rider's weight is distributed comfortably over a larger area, supported by back and buttocks. On a traditional upright bicycle, the body weight rests entirely on a small portion of the sitting bones, the feet, and the hands. 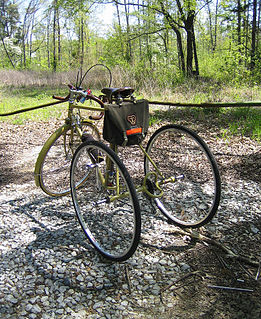 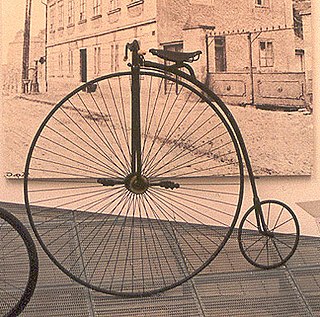 The penny-farthing, also known as a high wheel, high wheeler or ordinary, was the first machine to be called a "bicycle". It was popular in the 1870s and 1880s, with its large front wheel providing high speeds and comfort.

The Rover Company Limited was a British car manufacturing company that operated from its base in Solihull in Warwickshire. Its lasting reputation for quality and performance was such that its first postwar model reviewed by Road & Track in 1952 was pronounced finer than any but a Rolls-Royce. Rover also manufactured the Land Rover series from 1948 onwards, which spawned the Range Rover in 1970, and went on to become its most successful and profitable product — with Land Rover eventually becoming a separate company and brand in its own right. 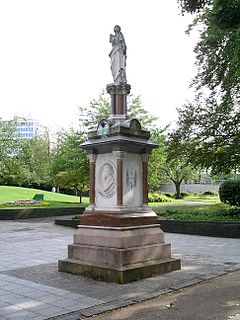 James Starley was an English inventor and father of the bicycle industry. He was one of the most innovative and successful builders of bicycles and tricycles. His inventions include the differential gear and the perfection of the bicycle chain drive.

A utility bicycle,city bicycle, urban bicycle, European City Bike (ECB), classic bike or simply city-bike, is a bicycle designed for frequent short, moderately paced rides through relatively flat urban areas. It is a form of utility bicycle commonly seen around the world, built to facilitate everyday riding in normal clothes in a variety of weather conditions. It is therefore a bicycle designed for practical transportation, as opposed to those primarily for recreation and competition, such as touring bicycles, racing bicycles, and mountain bicycles. Utility bicycles are the most common form globally, and comprise the vast majority found in the developing world. City bikes may be individually owned or operated as part of a public bike sharing scheme. 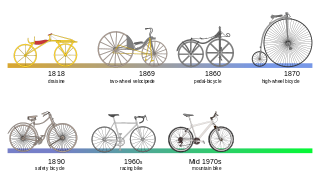 Vehicles for human transport that have two wheels and require balancing by the rider date back to the early 19th century. The first means of transport making use of two wheels arranged consecutively, and thus the archetype of the bicycle, was the German draisine dating back to 1817. The term bicycle was coined in France in the 1860s, and the descriptive title "penny farthing", used to describe an "ordinary bicycle", is a 19th-century term. 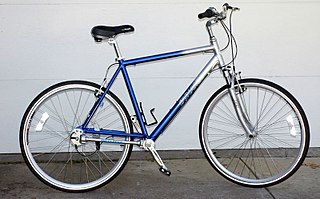 A shaft-driven bicycle is a bicycle that uses a drive shaft instead of a chain to transmit power from the pedals to the wheel. Shaft drives were introduced over a century ago, but were mostly supplanted by chain-driven bicycles due to the gear ranges possible with sprockets and derailleurs. Recently, due to advancements in internal gear technology, a small number of modern shaft-driven bicycles have been introduced.

John Kemp Starley was an English inventor and industrialist who is widely considered the inventor of the modern bicycle, and also originator of the name Rover.

Pope Manufacturing Company was founded by Albert Augustus Pope around 1876 in Boston, Massachusetts, and incorporated in Hartford, Connecticut in 1877. Manufacturing of bicycles began in 1878 in Hartford at the Weed Sewing Machine Company factory. Pope manufactured bicycles, motorcycles, and automobiles. From 1905 to 1913, Pope gradually consolidated manufacturing to the Westfield Mass plant. The main offices remained in Hartford. It ceased automobile production in 1915 and ceased motorcycle production in 1918. The company subsequently underwent a variety of changes in form, name and product lines through the intervening years. To this day, bicycles continue to be sold under the Columbia brand.

The Rover Company was a British bicycle and motorcycle manufacturer before it began the manufacture of motor cars. Rover was established in 1878 by John Kemp Starley in Coventry to produce bicycles. The company developed and produced the Rover Imperial motorcycle in November 1902. Between 1903 and 1924, Rover produced more than 10,000 motorcycles. 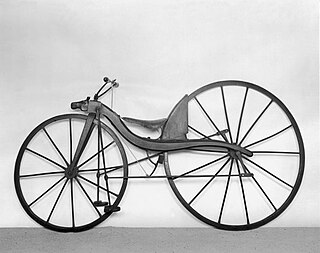 A treadle bicycle is a bicycle powered by a treadle instead of the more common crank. Treadles were one of the mechanisms inventors tried in order to position the pedals away from the drive wheel hub before the development of the bicycle chain or instead of it. Treadles have also been used to drive tricycles and quadracycles. 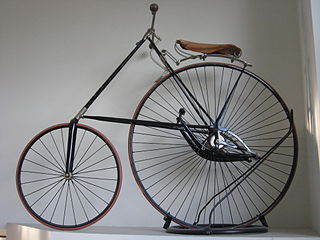 The American Star Bicycle was invented in 1880 by G. W. Pressey and manufactured by the H. B. Smith Machine Company in Smithville, Burlington County, New Jersey. It was characterized by a small wheel in front to avoid the problem of tipping forward inherent in other high wheelers. A Star bicycle was photographed being ridden down the steps in front of the United States Capitol in 1885 to demonstrate its longitudinal stability, and Star bicycles were used for the sport of bicycle polo in the mid-1880s. Pressey sued Smith in 1887 for royalties. The name "Star" was attributed to the double star arrangement of the spokes. 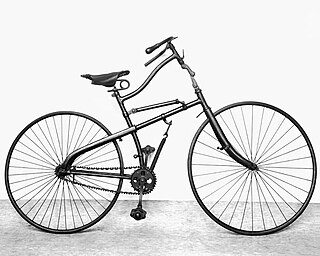 Whippet was a brand of safety bicycle designed by C. M. Linley and manufactured by Linley and Briggs in London. Examples exist from 1885 and 1888. They are notable for their use of springs to suspend the frame. An early external derailleur, that enabled two gear ratios and used a freewheel hub was introduced in the summer of 1894, and was available only on Whippet bicycles. | pages = 58–61

The Kangaroo dwarf bicycle was created in 1884 by Hillman, Herbert, and Cooper as a safer alternative to the ordinary bicycle. It had a 36 inch front drive wheel that was geared up to be equivalent to a 60 inch ordinary bicycle with a pair of chain drives, one on each side of the wheel. The Kangaroo was soon superseded by the Rover and other, more-modern safety bicycles.