Last updated May 02, 2020
Train station layout that uses both island and side platforms

In railway and rapid transit parlance, the Spanish solution is a station layout with two railway platforms, one on each side of the track. [1] This platform arrangement allows the separation of passenger streams by using one platform only for boarding and the other one only for alighting. [1] The concept of separate platforms for boarding and alighting has been proven effective at stations with high passenger numbers. [2]

An example of the Spanish Solution is the Marienplatz station on the Munich S-Bahn, with island platform for boarding and side platforms for alighting. [3] 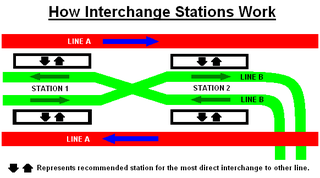 A cross-platform interchange is a type of interchange between different lines at a metro station. The term originates with the London Underground; such layouts exist in other networks but are not commonly so named. In the United States, it is often referred to as a "cross-platform transfer".

"Mind the gap" is an audible or visual warning phrase issued to rail passengers to take caution while crossing the horizontal, and in some cases vertical, spatial gap between the train door and the station platform.

The Berlin U-Bahn is a rapid transit railway in Berlin, the capital city of Germany, and a major part of the city's public transport system. Together with the S-Bahn, a network of suburban train lines, and a tram network that operates mostly in the eastern parts of the city, it serves as the main means of transport in the capital. 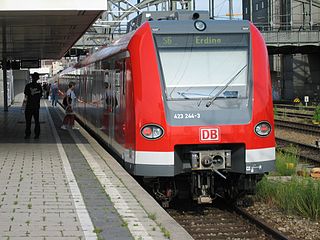 The Munich S-Bahn is an electric rail transit system in Munich, Germany. "S-Bahn" is the German abbreviation for Stadtschnellbahn, and the Munich S-Bahn exhibits characteristics of both rapid transit and commuter rail systems. 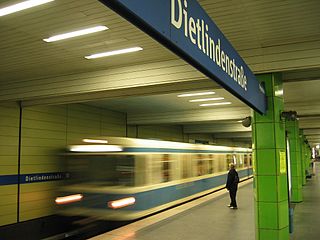 The Munich U-Bahn is an electric rail rapid transit network in Munich, Germany. The system began operation in 1971, and is operated by the municipally owned Münchner Verkehrsgesellschaft. The network is integrated into the Münchner Verkehrs- und Tarifverbund and interconnected with the Munich S-Bahn. The U-Bahn currently comprises eight lines, serving 96 stations, and encompassing 103.1 kilometres (64.1 mi) of routes. 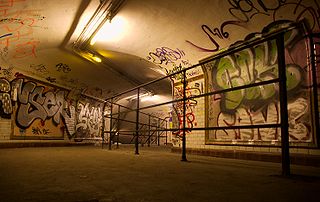 Ghost stations is the usual English translation for the German word Geisterbahnhöfe. This term was used to describe certain stations on Berlin's U-Bahn and S-Bahn metro networks that were closed during the period of Berlin's division during the Cold War. Since then, the term has come to be used to describe any disused station actively passed through by passenger trains, especially those on an underground railway line. Sometimes the term is also employed for unused underground stations not passed by trains. 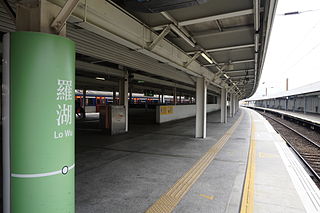 Lo Wu is the northern terminus of the East Rail Line of Hong Kong, located in Lo Wu within the Closed Area on Hong Kong's northern frontier. The station serves as a primary checkpoint for rail passengers between Hong Kong and mainland China and vice versa, rather than serving a specific area. It is also the northernmost railway station in Hong Kong. 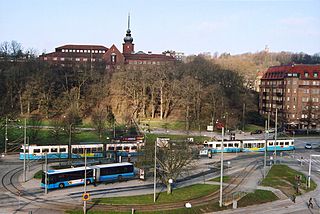 The Nuremberg U-Bahn is a rapid transit system run by Verkehrs-Aktiengesellschaft Nürnberg, which itself is a member of the Verkehrsverbund Großraum Nürnberg. The Nuremberg U-Bahn is Germany's newest metro system, having begun operation in 1972. In 2008, driverless and fully automated trains were introduced on the new U3 line, making it Germany's first automatic U-Bahn line. The current network of the U-Bahn is composed of three lines, serving 48 stations, and comprising 37.1 kilometres (23.1 mi) of operational route, making it the shortest of the four metro systems in Germany, behind Berlin, Hamburg and Munich. Its DT1 vehicles are largely the same design as the A cars found on the Munich U-Bahn, and both transport companies once lent each other trainsets as reserve rolling stock for major events at the time when both systems were quite new. Such swaps are now no longer possible, as the rolling stock on each system have developed in ways that would require modification for use on the other system. The newer Nuremberg trains are incompatible with the Munich system. 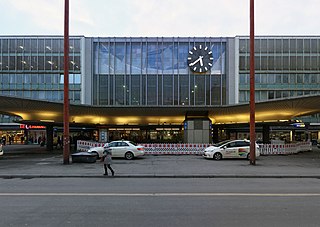 München Hauptbahnhof is the main railway station in the city of Munich, Germany. It is one of the three stations with long-distance services in Munich, the others being München Ost and München-Pasing. München Hauptbahnhof sees about 450,000 passengers a day, which puts it on par with other large stations in Germany, such as Hamburg Hauptbahnhof and Frankfurt (Main) Hauptbahnhof. It is classified by Deutsche Bahn as a category 1 station, one of 21 in Germany and two in Munich, the other being München Ost. The mainline station is a terminal station with 32 platforms. The subterranean S-Bahn with 2 platforms and U-Bahn stations with 6 platforms are through stations. 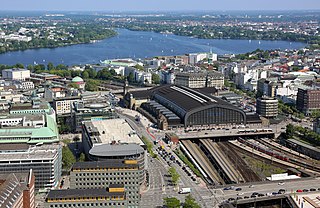 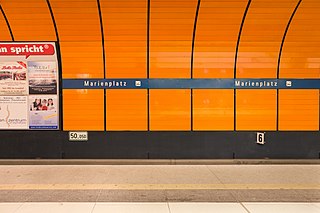 München Marienplatz is an important stop on the Munich S-Bahn and U-Bahn network, located under the square of the same name in Munich's city centre. The S-Bahn lines , , , , , and intersect with the U-Bahn lines and . The station is one of the most frequently used stations in the network, with up to 24,400 people transferring and 8,000 passengers entering or exiting each hour. In 2007, 175,400 used the station daily on weekdays, including entries, exits and transfers.

München-Pasing is a railway station with nine platforms situated in the west of Munich. It is the third-largest station in Munich, after München Hauptbahnhof and München Ost. 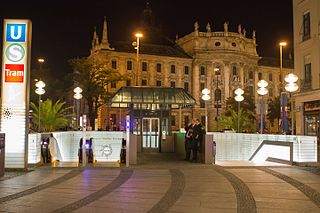 München Karlsplatz (Stachus) is an underground S-Bahn and U-Bahn station below the Karlsplatz in central Munich. It is one of the busiest stations in Munich, as it is located at the western end of Munich's Altstadt.

Trudering station is an interchange station of the Munich S-Bahn and the Munich U-Bahn in the borough of Trudering-Riem in the Bavarian capital of Munich. 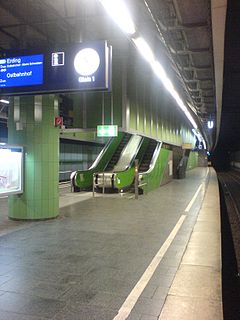 Munich Isartor station is a station opened in 1972 on the Munich S-Bahn on the trunk line between Munich Central Station and Munich East station (Ostbahnhof). It is located below Isartorplatz and the Thierschstraße/Zweibrückenstraße intersection in Munich and is named after the nearby Isartor city gate. It is classified by Deutsche Bahn as a category 4 station. 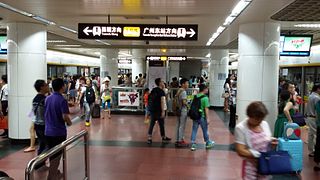 Gongyuanqian Station is an interchange station of Line 1 and Line 2 of the Guangzhou Metro. It started operation on 28 June 1999 and is located under People's Park in Yuexiu District of Guangzhou.

A split platform is a station that has a platform for each track, split onto two or more levels. This configuration allows a narrower station plan horizontally, at the expense of a deeper vertical elevation, because sets of tracks and platforms are stacked above each other. Where two rails lines cross or run parallel for a time, split platforms are sometimes used in a hybrid arrangement that allows for convenient cross-platform interchange between trains running in the same general direction. 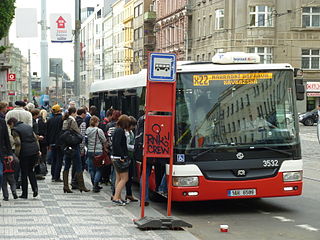 In transportation, dwell time or terminal dwell time refers to the time a vehicle such as a public transit bus or train spends at a scheduled stop without moving. Typically, this time is spent boarding or deboarding passengers, but it may also be spent waiting for traffic ahead to clear, trying to merge into parallel traffic, or idling time in order to get back on schedule. Dwell time is one common measure of efficiency in public transport, with shorter dwell times being universally desirable. 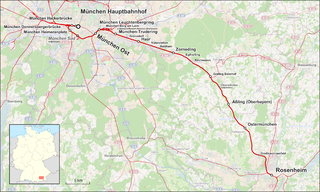 The Munich–Rosenheim railway is a 65 kilometre-long double-track main line of the German railways. It connects Munich Hauptbahnhof with Rosenheim station, where it connects with the Rosenheim–Salzburg railway, which connects with the line to Vienna at Salzburg, and the line to Kufstein, which continues to Innsbruck and the Brenner line to Italy. The line is part of the "Main line for Europe", connecting Paris with Bratislava and Budapest and the almost identical line 17 of Trans-European Transport Networks (TEN-T). It is part of the line 1 of TEN-T. It is electrified at 15 kV, 16.7 Hz. It was opened between Munich and Rosenheim in 1871.