Steven Joseph "Steve" O'Shaughnessy (born 9 September 1961) is a former English professional cricketer who played for Lancashire and Worcestershire in the 1980s, and then had a substantial career in Minor Counties cricket with Cumberland. Since retiring from playing, he has become an umpire, and was promoted in December 2010 to the first-class panel for the 2011 season.

Born in Bury, Lancashire, O'Shaughnessy was selected for the England Young Cricketers tour of the West Indies in 1979–80, playing in all three Youth Tests. He was successful with the bat, hitting 130 from number eight in the second match at Castries and then, higher up the order, 81 and 93 in the third game at Bridgetown. [1] [2] He was also to play for the Young Cricketers against their Indian counterparts in 1981, but with less success.

O'Shaughnessy made his List A debut on 1 June 1980, in a John Player League for Lancashire against Warwickshire at Aigburth, though his contribution was minimal as he was dismissed for one and neither bowled nor held a catch. [3] His first-class debut was just three days later, against Oxford University at The University Parks where he made an unbeaten 50 and took two catches in a ten-wicket victory. [4] He took 3–23 in a John Player League match against Hampshire in late July, [5] and ended the summer with seven List A wickets, but his only first-class victim of the season was Yorkshire opener Richard Lumb in late August. [6]

From 1981 until 1987, O'Shaughnessy played fairly regularly in the Lancashire side. He made two of his five first-class centuries in 1983 (100* versus Yorkshire and a contrived 105 against Leicestershire, of which more below), but it was 1984 which proved to be his best year with the bat. He passed a thousand first-class runs for the only summer of his career, hitting 1,167 at 34.32, including the other three centuries, the highest – and his career-best – being 159* against Somerset at Bath. [7] 1984 also saw his only List A hundred: 101* against Leicestershire in August. [8] As a bowler, his highest season's aggregates were 27 in 1982 for first-class cricket and 26 in 1984 for the one-day game. His career-best returns were 4–66 against Nottinghamshire in the County Championship in 1982, and 4–17 against Leicestershire in the 1985 Benson & Hedges Cup. [9] [10]

An unusual incident occurred on 13 September 1983, the last day of the 1983 County Championship season. Lancashire were playing Leicestershire, and rain had delayed the start of play by a day and a half. On the final afternoon, facing an attack consisting of David Gower (9–0–102–0) and James Whitaker (8–1–87–0), Lancashire openers Graeme Fowler and O'Shaughnessy both scored centuries: Fowler's in 46 minutes and O'Shaughnessy's in 35. [11] This performance won O'Shaughnessy the Walter Lawrence Trophy for the fastest century of the season, despite its contrived circumstances, and equalled Percy Fender's 1920 record. Fender himself, by then 91 years old and blind, sent O'Shaughnessy a telegram: "Congratulations on equalling my 63-year-old record. Fender" and the two men met a few days later at Fender's home in Horsham. [12]

O'Shaughnessy received his Lancashire cap in 1985, but he had a disastrous summer in first-class cricket. In 23 innings he passed 50 only once, and his average was barely 13. [13] He did better in one-day cricket, averaging over 29, but (the aforementioned 4–17 notwithstanding) the wickets were starting to dry up: he would only ever take two wickets in a List A innings once more. [14] The next two seasons were rather better so far as batting was concerned, though his bowling fell away further: he took just 12 first-class wickets in the two seasons combined, averaging 72 and 50 in 1986 and 1987 respectively.

In 1988, O'Shaughnessy moved to Worcestershire, and his career with his new employer began promisingly with 50 against his old county in the Refuge Assurance League at Old Trafford. [15] He followed it up with 44 in the Championship against Nottinghamshire at Worcester. [16] However, it proved to be a false dawn. That 44 remained his highest first-class score for Worcestershire, and although he did strike 62 versus Hampshire in the NatWest Trophy semi-final, [17] he failed badly with the rest of the top order in the final, being dismissed for one run. [18]

By 1989, O'Shaughnessy was spending considerable amounts of time in the Second XI, and made only one first-class appearance (against the touring Australians), and although he played in 12 List A games he enjoyed little success. After the Refuge Assurance League game against Kent at the end of July, O'Shaughnessy would not be seen again in a Worcestershire shirt, nor indeed in first-class cricket.

Although no longer involved in county cricket at the highest level, he continued to play Minor Counties cricket for a decade. As well as his numerous games for Cumberland (which gave him the occasional List A appearance in the NatWest Trophy) he turned out on one occasion in 1990 for Northumberland. [19] He also played in Australia for the Australian Capital Territory on a few occasions in the early 1990s, and in 2003 and 2004 played club cricket for Alderley Edge Cricket Club. O'Shaughnessy's final List A appearance came for Cumberland against Scotland in the C&G Trophy in August 2003. [20] He scored 8, and thus missed by just one run the chance to have scored 3,000 List A runs in his career. [21]

Geoffrey Arthur Edrich was born in Lingwood, Norfolk, on 13 July 1918. He was an English first-class cricketer who played in 339 matches for Lancashire between 1946 and 1958 as a right-handed batsman. Before his first-class career, he had played Minor Counties cricket for Norfolk (1937–1939), and after his first-class retirement he returned to the Minor Counties, this time playing for Cumberland (1960–1962). Whilst at Cumberland, he was also professional for Workington Cricket Club.

Andrew James Harris, commonly known as A. J. Harris, is a former English first-class cricketer. A right-arm medium-pace bowler and a right-handed batsman, Harris made more than 120 appearances, taking over 400 wickets at an average of just over 31. 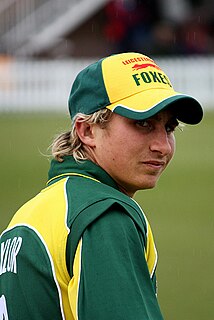 Derek Brooke Pearson is an English former first-class cricketer who played from the mid-1950s until the early 1960s, taking over 200 wickets. He played all but two of his games for Worcestershire, who capped him in 1959; the others were for Combined Services.

Alan Paul Pridgeon is a former English cricketer who played first-class and List A cricket for Worcestershire County Cricket Club, taking 530 first-class and 273 List A wickets for the county between the early 1970s and the late 1980s. He was capped by the county in 1980. He played football in the winters as a centre-half for Stourbridge F.C. 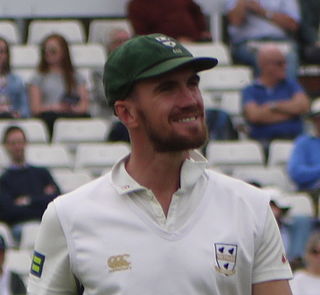 Derbyshire County Cricket Club in 1981 represents cricket season when the English club Derbyshire had been playing for one hundred and ten years. It was the season when they won National Westminster Bank Trophy. They won ten matches in the John Player League to finish fourth. In the County Championship, they won four matches to finish twelfth in their seventy-seventh season in the Championship. They were eliminated at group level in the Benson & Hedges Cup.

Derbyshire County Cricket Club in 1990 represents the cricket season when the English club Derbyshire won the Refuge Assurance League winning twelve of their sixteen matches. The club had been playing for one hundred and nineteen years. In the County Championship, they won six matches to finish twelfth in their eighty-sixth season in the Championship. They were eliminated in round 2 of the National Westminster Bank Trophy and at group level in the Benson & Hedges Cup.

Derbyshire County Cricket Club in 1997 was the cricket season when the English club Derbyshire had been playing for one hundred and twenty-six years. In the County Championship, they won two matches to finish sixteenth in their ninety fourth season in the Championship. They came fourteenth in the AXA Life League and did not progress from the group in the National Westminster Bank Trophy. They reached the semi-final of the Benson & Hedges Cup.

Mark Andrew Crawley is a former English cricketer. Crawley was a right-handed batsman who bowled right-arm medium. He was born at Newton-le-Willows, Lancashire.

Stephen Wall is a former English cricketer. Wall was a right-handed batsman who bowled right-arm medium-fast. He was born in Ulverston, Lancashire.

Andrew Richard Roberts is a former English cricketer. Roberts was a right-handed batsman who bowled leg break. He was born in Kettering, Northamptonshire and is the brother of cricketer Timothy Roberts.

Damian Gareth Brandy is a former English cricketer. Brandy is a right-handed batsman who bowls right-arm medium pace. He was born at Highgate, London.