The Light Four was dropped in 1920 as Studebaker shifted its model range to the more popular Light Six, Special Six and the Big Six. 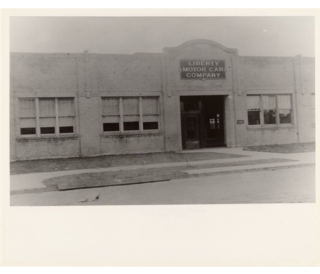 The Liberty Motor Car Company was a United States automobile maker based in Detroit, Michigan that started in February 1916 with capital stock of $400,000. Its president was Percy Owen, who was the vice-president of Saxon. It ran into financial trouble, and in September 1923, it was acquired by Columbia Motors.

The Gasmobile, originally called the American, was an automobile first produced in 1899. The name was changed to Gasmobile in 1900 by president John H. Flager. It appeared at the New York Auto Show in 1900. By 1901, 140 cars were made. One of its distinctive features was an automatic starting device. After producing a six-cylinder car, the company folded in 1902. 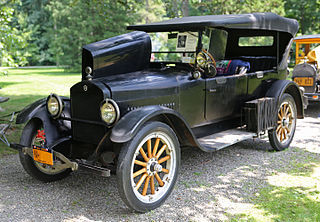 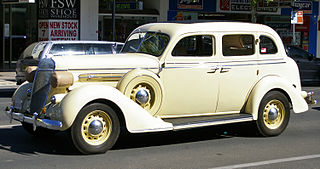 The Chrysler Airstream is an automobile produced by Chrysler in 1935 and 1936. The Airstream was a conventional looking automobile that was trimmed to evoke a feeling of streamlined design, and was a smaller luxury car to the larger Imperial. A similar car, with the same Airstream name was also sold by Chrysler's companion brand DeSoto during the period. 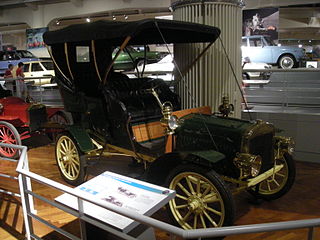 The Ford Model B is an upscale touring car that was introduced in 1904 by Ford. It was built at the Ford Piquette Avenue Plant. It was Ford's first car to use the front-engine layout, with a large 24 hp 4-cylinder engine positioned at the front behind a conventional radiator. The smaller Model A-derived Model C positioned its flat 2-cylinder motor under the seat.

The Great Eagle was an American automobile manufactured from 1910 to 1915. It was located in Columbus, Ohio, and the president was Fred C. Myers. They were mostly large cars. Unfortunately, the company went into receivership in 1915.

The Gas-au-lec was an American automobile manufactured by Corwin Manufacturing Company of Peabody, Massachusetts.

The Gem was an automobile manufactured in both Jackson, Michigan and Grand Rapids, Michigan by the Gem Motor Car Company from December, 1917 to 1919. The company was incorporated in December 1917, and early the next month it was announced that capitalization was to be $250,000, with $150,000 yet to be issued. The Gem was a light, assembled car with a four-cylinder G.B.&S. engine. Originally the plan was to acquire the complete chassis and bodies and complete the assembly of the cars in Grand Rapids. Gem planned to make some of the components itself eventually, though this appears not to have occurred. Only two models were produced, a 5-passenger touring car, selling for $845, and a light delivery van.

The Hollier, also known as the Vincent-Hollier, was an automobile built in Chelsea and Jackson, Michigan by Charles Lewis, president of the Lewis Spring and Axle Company from 1915 to 1921. The Hollier was available originally with a V-8 engine of their own design. A later offering, starting in 1917, was powered by a six-cylinder Falls engine. Only open models were built. After the war ended, the company name was changed.

The Canda Manufacturing company based in Carteret, New Jersey, produced cars from 1900-1902.

The Commonwealth Motors Corporation was a luxury auto company that produced cars from 1917 to 1922. The company was founded in Chicago as Partin-Palmer company in 1913, but in 1915 got into financial trouble. So, in 1917, the name was changed to Commonwealth, and production was moved to Joliet, Illinois.

The Anger Engineering Company was an automobile company from Milwaukee, Wisconsin from 1913-1915.

The Ambassador automobile company of Chicago, Illinois was founded in 1921 by John Hertz.

The Wolverine car was made by the Reid Manufacturing Company of Detroit, US from 1904 to 1905. The prototype was designed by Walter L. Marr. A test drive by Cycle and Automobile Journal reported that the car was good. In 1906 the company moved to Dundee, Michigan, and changed its name to Wolverine Automobile & Commercial Company of Dundee. where it closed in 1908.

The James automobile company was created in 1909 by H. K. James. 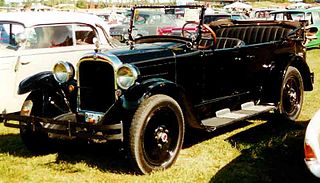 The Dodge Series 116 was an automobile made by Dodge from 1923 to 1925 as their main model. Released June 1922, it was the first car ever to have an all steel body. The model was updated in 1924 with a higher hood line, a rear brake light, and new springs.

The Model X was a four-seat passenger car produced by Oldsmobile in 1908, offered as an entry-level alternative to the Model D that appeared in 1901, replacing the Model M. It was the junior companion to the first six-cylinder sedan called the Oldsmobile Model Z also introduced in 1908, and shared most of its technology with the Model M.