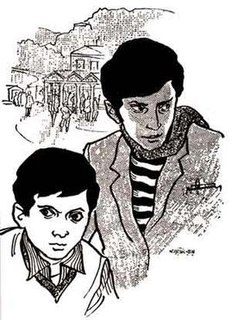 Feluda, or Prodosh Chandra Mitter, is a fictional Bengali private investigator starring in a series of Bengali novels of Indian fictional detective novels and short stories written by Indian Bengali film director and writer Satyajit Ray. The detective resides at 21 Rajani Sen Road, Ballygunge, Kolkata, West Bengal, India. Feluda first made his appearance in a Bengali children's magazine called Sandesh (সন্দেশ) in 1965, under the editorialship of Satyajit and Subhas Mukhopadhyay. His first adventure was Feludar Goendagiri. 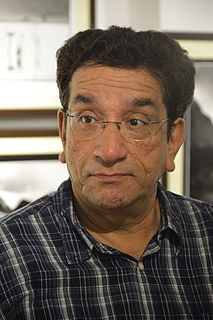 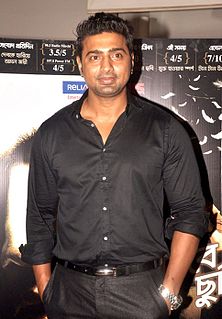 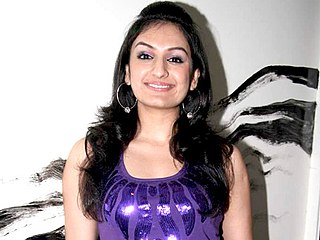 Akriti Kakar is an Indian singer. Her songs, "Saturday Saturday" from the film Humpty Sharma Ki Dulhania and "Iski Uski" from 2 States became popular. Akriti was a judge on Zee Bangla's Sa Re Ga Ma Pa: Li'l Champs and was going to appear on Colors 's Jhalak Dikhhla Jaa.

Royal Bengal Rahashya is a 2011 Indian Bengali thriller film directed by Sandip Ray based on the novel of the same name by Satyajit Ray. The film was released on 23 December 2011. It was the fifth big screen Feluda adaptation of Sandip Ray in the Feluda new film series and was the sequel to Gorosthaney Sabdhan. After the demise of Bibhu Bhattacharya (Jatayu), Sabyasachi Chakrabarty declared that he would not be playing Feluda anymore. Thus, director Sandip Ray decided to reboot the series, Badshahi Angti, the first installment of which starring Abir Chatterjee as Feluda and Sourav Das as Topshe was released on 19 December 2014. But the reboot series was cancelled by Sandip Ray in March, 2016. He revealed instead of continuing the reboot series he will continue the previous Feluda film series and he will make a sequel of this movie named Double Feluda which is heading to a Christmas release in December, 2016. The movie will be a tribute to 50 years of Feluda. For the new film Sabyasachi Chakrabarty will return as Feluda and Saheb Bhattacharya as Topshe after five years.

Paran Bandopadhyay is an Indian Bengali film, television and stage actor based in Kolkata. He gained popularity with his works with notable Bengali film director Sandip Ray, the son of notable filmmaker and author Satyajit Ray.

Feluda is an Indian-Bengali detective media franchise created by Indian-Bengali film director and writer Satyajit Ray, featuring the character, Feluda. The titular character is a private investigator starring in a series of Bengali novels and short stories. The detective resides at 21 Rajani Sen Road, Ballygunge, Kolkata, West Bengal, India. Feluda first made his appearance in a Bengali children's magazine called Sandesh (সন্দেশ) in 1965, under the editorialship of Satyajit and Subhas Mukhopadhyay. His first adventure was Feludar Goendagiri. 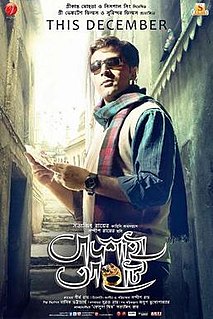 Badshahi Angti is a 2014 Indian Bengali-language thriller film directed by Sandip Ray, based on the novel of the same name by Satyajit Ray, starring Abir Chatterjee and Sourav Das as Feluda and Topse respectively. The film was released on 19 December 2014. It is the first film which stars Abir Chatterjee as Feluda. This was going to be a reboot to previous Feluda film series after Royal Bengal Rahashya. But in 2016 Sandip Ray cancelled the reboot series because Abir Chatterjee started a new version of film series based on Byomkesh Bakshi franchise under Shree Venkatesh Films and Surinder Films. The other reason was the new Feluda movie Sandip Ray intended to make under a Mumbai-based production house Eros International, but Abir has a strict contract with Shree Venkatesh Films and Surinder Films.

Byomkesh Bakshi is an Indian-Bengali detective media franchise created by Sharadindu Bandyopadhyay and featuring the character, Byomkesh Bakshi. Referring himself as "truth-seeker" or Satyanweshi in the stories, Bakshi is known for his proficiency with observation, logical reasoning, and forensic science which he uses to solve complicated cases, usually murders. Initially appearing in the 1932 story Satyanweshi, the character's popularity immensely increased in Bengal and other parts of India.

Byomkesh Phire Elo is a 2014 Indian mystery thriller film on Bengali fictional detective Byomkesh Bakshi, released on 19 December 2014. The film is directed by Anjan Dutt. This is the third installment of Byomkesh series By Anjan Dutt, serving as a sequel to Byomkesh Bakshi and Abar Byomkesh. The film is based on Beni Sanghar by Sharadindu Bandyopadhyay.

Har Har Byomkesh is a 2015 Indian Bengali mystery thriller film directed by Arindam Sil and produced jointly by Mahendra Soni, Shrikant Mohta and Nispal Singh Rane on Shree Venkatesh Films and Surinder Films banner respectively. The film is based on the fictional detective, Byomkesh Bakshi, created by the Bengali writer Sharadindu Bandyopadhyay. The film stars Abir Chatterjee as the eponymous sleuth, while Ritwick Chakraborty enacts the role of his assistant Ajit Bandopadhyay and Sohini Sarkar helm in the shoes of Satyabati. The teaser of the film was released on 11 October 2015. The trailer was launched on 15 October 2015. The film was released on 18 December 2015.

Double Feluda is a 2016 Bengali language crime thriller detective film, based on the Bengali sleuth Feluda, created by the acclaimed and renowned Oscar- winning director Satyajit Ray. It is the 40th film in the Feluda series. Directed by his son Sandip Ray, the film marks the comeback of both Sabyasachi Chakraborty and Saheb Bhattacharya, with the former returning to the eponymous role of Feluda and the latter playing his sidekick. This is a sequel of Royal Bengal Rahashya (2011). The film released on 16 December 2016 to mark the 50th anniversary of the iconic creation. The film is based on two Feluda stories - Samaddarer Chabi and Golokdham Rahasya.

Anirban Bhattacharya is an Indian theatre and film actor. He has played lead roles in many popular theatre productions. His first successful theatre production was Debi Sarpamasta, written by Manoj Mitra, directed by Debesh Chattopadhyay. His other notable works are Anthony Soudamini, Nagamandala, Jara Agun Lagay, Bisorjan, FM Mahanagar, Karu Basana, Awdyo Shesh Rajani, Athoi etc. In 2017, he got the Mahindra Excellence Theatre Awards (META) as Best Actor in a Leading Role (Male) for Awdyo Shesh Rajani. In 2015, he started his film career with the Zee Bangla telefim Kader Kuler Bou. He got fame for his character as Bishan Roy from the film Eagoler Chokh. For playing this role, he was picked up as the Filmfare Awards East for Best Actor in a Supporting Role in 2017. In 2019, He got his first Best Actor Award for the role of Nikhilesh Chowdhury from the movie Ghawre Bairey Aaj which was immensely praised by critics and audiences. 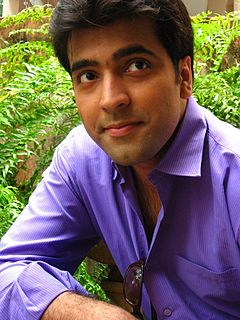 Abir Chatterjee is an Indian actor who mainly works in Bengali cinema. He started his career with Bengali television and made his debut in Bengali cinema in 2009 as a lead with Cross Connection.

Tritiya Adhyay also referred to as Tritiyo Adhyay is a Bengali romantic thriller, directed by Manoj Michigan and starring Abir Chatterjee and Paoli Dam. The film was released on 8 February 2019. At the Darbhanga International Film Festival, the movie won the Best National Feature Film and the Best Screenplay Award at the Expressions Film Festival.