Sweden at the 1992 Summer Olympics

The Swedish women, despite not having a spectacular showing in the individual round, nearly knocked off the heavily favored Korean squad in the team round quarterfinals. The Swedes tied the Koreans at 240 in the 27-arrow match, forcing a shootout that the Koreans won to eliminate the Swedes from medal contention. No other team came within 12 points of the Koreans, and the Korean team's average margin against the three other nations it faced was nearly 20 points.

Sweden's entry at the 2000 Summer Olympics in Sydney, Australia consisted of 150 competitors who took part in 92 events in 22 sports.

Turkey competed at the 1988 Summer Olympics in Seoul, South Korea. 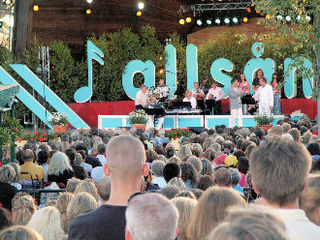 Sweden competed at the 1992 Winter Olympics in Albertville, France.

Sweden competed at the 1994 Winter Olympics in Lillehammer, Norway.

Sweden competed at the 2000 Summer Paralympics in Sydney, Australia, from 18 October to 29 October 2000.