Theron Joseph Rubley (born June 19, 1968), is a former American professional gridiron football player who was a quarterback in the National Football League (NFL), World League of American Football (WLAF), and the Canadian Football League (CFL) during the 1990s. He played for the Los Angeles Rams, Green Bay Packers, and Denver Broncos of the NFL, the Rhein Fire of the WLAF, and the Winnipeg Blue Bombers and Hamilton Tiger-Cats of the CFL.

Rubley played collegiately at the University of Tulsa.

Rubley was selected by the Los Angeles Rams in the ninth round (228th pick overall) of the 1992 NFL Draft. He spent his rookie season as the team's inactive third quarterback.

Rubley saw action in two NFL seasons in 1993 and 1995. He started seven games for the Rams during the 1993 season. With limited playing time and being waived numerous times by NFL teams, Rubley found success with the Rhein Fire of the WLAF and played briefly with Hamilton Tiger-Cats and Winnipeg Blue Bombers of the CFL.

His most infamous NFL moment, leading to his being cut from the team, came as a Green Bay Packer in a 1995 game against the Minnesota Vikings. Both starting quarterback Brett Favre and back-up quarterback Ty Detmer got injured in the game, but the Packers and Vikings were tied 24–24 with less than a minute to go and the Packers with the ball on the Minnesota 38-yard line.

On 3rd-and-1, coach Mike Holmgren called for a quarterback sneak. However, Rubley, the only remaining quarterback for the Packers, audibled and called a roll-out. He passed the ball and it was quickly intercepted, giving Minnesota the ball and eventually, the win.

After the game, an incredulous Holmgren commented, "I called a quarterback sneak. He [Rubley] changed the play. He thought he had the choice." Packers General Manager Ron Wolf was equally livid, commenting, "I can't believe this. I think we've exhausted ways to lose here." [3] Rubley himself said, "It was not a real good decision." [4] Rubley was cut later that week, and never appeared in another NFL game, although he was on the Denver Broncos roster the following season. [5]

Rubley served as a consultant for the film The Replacements , specifically coaching Keanu Reeves in his role as the starting quarterback for the fictional Washington Sentinels. Reeves' character, Shane Falco, is loosely based on Rubley. [6]

Super Bowl XXXII was an American football game played between the National Football Conference (NFC) champion Green Bay Packers and the American Football Conference (AFC) champion Denver Broncos to decide the National Football League (NFL) champion for the 1997 season. The Broncos defeated the Packers by the score of 31–24. The game was played on January 25, 1998, at Qualcomm Stadium in San Diego, California, the second time that the Super Bowl was held in that city. Super Bowl XXXII also made Qualcomm Stadium the only stadium in history to host both the Super Bowl and the World Series in the same year.

Douglas Irvin Pederson is an American football coach and former quarterback in the National Football League (NFL). Pederson spent most of his 13-season playing career as a backup to Brett Favre on the Green Bay Packers, where he was part of the team that won a Super Bowl title in Super Bowl XXXI. He was also a backup to Dan Marino on the Miami Dolphins and a starter for the Philadelphia Eagles and Cleveland Browns until retiring in 2004. 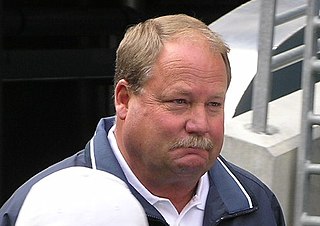 Michael George Holmgren is a former American football coach and executive. He began his NFL career as a quarterbacks' coach and later as an offensive coordinator with the San Francisco 49ers, where they won Super Bowls XXIII and XXIV. He served as the head coach of the Green Bay Packers from 1992 to 1998, where he won Super Bowl XXXI, and of the Seattle Seahawks from 1999 to 2008. His last role in the NFL was as team president of the Cleveland Browns from 2010 to 2012. Prior to his career in the NFL, Holmgren coached football at the high school and collegiate levels. 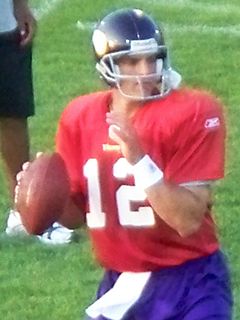 Gustave Joseph Frerotte is a former American football quarterback. He was drafted by the Washington Redskins in the seventh round of the 1994 NFL Draft. He played college football at Tulsa.

Kenneth Paul Karcher is an American football coach and former player. He is currently the head football coach at East Central Community College, a position he has held since January 2013. Karcher served in the same capacity at Liberty University from 2000 to 2005, compiling a record of 21–46. 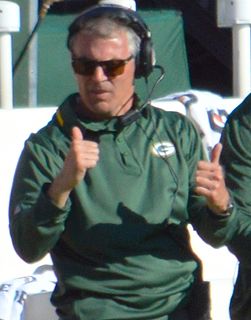 Thomas Albert Clements is a retired American football coach and a former Canadian Football League (CFL) quarterback who was most recently the passing game coordinator and quarterbacks coach for the Arizona Cardinals of the National Football League (NFL).

Jonathan Robert Ryan is a Canadian professional gridiron football punter who is a free agent. He played college football for the University of Regina Rams, and began his professional career with the Winnipeg Blue Bombers of the CFL after being selected in the Canadian College Draft. He also played for the Green Bay Packers and was a member of the Seattle Seahawks for ten seasons. He played for the Saskatchewan Roughriders in 2019.

World Bowl '97 was the final game of the 1997 WLAF season in American football. It was the fifth championship game of the World League of American Football (WLAF), and the third since the WLAF adopted a six-team European format.

Michael Patrick Quinn is a former professional American football quarterback in the National Football League for the Pittsburgh Steelers, Indianapolis Colts, Dallas Cowboys, Miami Dolphins, Houston Texans and Denver Broncos. He also was a member of the Rhein Fire of NFL Europe, and the Montreal Alouettes and Winnipeg Blue Bombers of the Canadian Football League. He played college football at Stephen F. Austin State University.

The 1993 Green Bay Packers season was their 75th season overall and their 73rd in the National Football League. They had a 9–7 record and won their first playoff berth in 11 years. The record also marked the first back-to-back winning season since the Packers 1967 season. During the regular season, the Packers finished with 340 points, ranking sixth in the National Football League, and allowed 282 points, ranking ninth. In his third year as a pro and second with the Packers, quarterback Brett Favre led the Packers offense, passing for 3,303 yards and 19 touchdowns. Favre, who played his first full season, was selected to his second of eleven Pro Bowl appearances.

Dale Leonard Hackbart is a former American football defensive back who played twelve seasons in the National Football League for the Green Bay Packers, Washington Redskins, Minnesota Vikings, St. Louis Cardinals, and Denver Broncos from 1960 to 1973. He also played in the Canadian Football League for the Winnipeg Blue Bombers in 1964 and 1965.

Jonathan Bernard Brown is a former professional American, Canadian and Arena football defensive lineman, who last played for the BC Lions of the Canadian Football League. He has also played for the Toronto Argonauts. He was drafted by the Green Bay Packers in the third round of the 1998 NFL Draft. He played college football for the Tennessee Volunteers. He is currently the head coach for his high school alma mater, Booker T. Washington High School.

The 1992 Green Bay Packers season was their 74th season overall and their 72nd in the National Football League. The team finished with a 9–7 record under new coach Mike Holmgren, earning them a second-place finish in the NFC Central division. 1992 saw the emergence of QB Brett Favre and the start of the Packers' success of the 1990s.

Christopher Perez is a former American football offensive tackle who played six seasons in the Canadian Football League (CFL) with the Memphis Mad Dogs, Toronto Argonauts, Winnipeg Blue Bombers and BC Lions. He was drafted by the Miami Dolphins in the fifth round of the 1992 NFL Draft. He played college football at the University of Kansas and attended William Fremd High School in Palatine, Illinois. Perez was also a member of the New England Patriots, Phoenix Cardinals, Green Bay Packers, Barcelona Dragons and Chicago Enforcers. 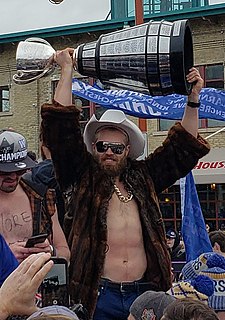 Christopher L. Streveler is an American football quarterback for the Arizona Cardinals of the National Football League (NFL). He played college football at Minnesota and South Dakota. Streveler previously played two seasons for the Winnipeg Blue Bombers of the Canadian Football League (CFL).