At a generic level of description, there are two kinds of computer files: text files and binary files. [1]

Because of their simplicity, text files are commonly used for storage of information. They avoid some of the problems encountered with other file formats, such as endianness, padding bytes, or differences in the number of bytes in a machine word. Further, when data corruption occurs in a text file, it is often easier to recover and continue processing the remaining contents. A disadvantage of text files is that they usually have a low entropy, meaning that the information occupies more storage than is strictly necessary.

A simple text file may need no additional metadata (other than knowledge of its character set) to assist the reader in interpretation. A text file may contain no data at all, which is a case of zero-byte file.

The ASCII character set is the most common compatible subset of character sets for English-language text files, and is generally assumed to be the default file format in many situations. It covers American English, but for the British Pound sign, the Euro sign, or characters used outside English, a richer character set must be used. In many systems, this is chosen based on the default locale setting on the computer it is read on. Prior to UTF-8, this was traditionally single-byte encodings (such as ISO-8859-1 through ISO-8859-16) for European languages and wide character encodings for Asian languages.

Because encodings necessarily have only a limited repertoire of characters, often very small, many are only usable to represent text in a limited subset of human languages. Unicode is an attempt to create a common standard for representing all known languages, and most known character sets are subsets of the very large Unicode character set. Although there are multiple character encodings available for Unicode, the most common is UTF-8, which has the advantage of being backwards-compatible with ASCII; that is, every ASCII text file is also a UTF-8 text file with identical meaning. UTF-8 also has the advantage that it is easily auto-detectable. Thus, a common operating mode of UTF-8 capable software, when opening files of unknown encoding, is to try UTF-8 first and fall back to a locale dependent legacy encoding when it definitely isn't UTF-8.

On most operating systems the name text file refers to file format that allows only plain text content with very little formatting (e.g., no bold or italic types). Such files can be viewed and edited on text terminals or in simple text editors. Text files usually have the MIME type text/plain, usually with additional information indicating an encoding.

MS-DOS and Microsoft Windows use a common text file format, with each line of text separated by a two-character combination: carriage return (CR) and line feed (LF). It is common for the last line of text not to be terminated with a CR-LF marker, and many text editors (including Notepad) do not automatically insert one on the last line.

On Microsoft Windows operating systems, a file is regarded as a text file if the suffix of the name of the file (the "filename extension") is .txt. However, many other suffixes are used for text files with specific purposes. For example, source code for computer programs is usually kept in text files that have file name suffixes indicating the programming language in which the source is written.

Most Microsoft Windows text files use "ANSI", "OEM", "Unicode" or "UTF-8" encoding. What Microsoft Windows terminology calls "ANSI encodings" are usually single-byte ISO/IEC 8859 encodings (i.e. ANSI in the Microsoft Notepad menus is really "System Code Page", non-Unicode, legacy encoding), except for in locales such as Chinese, Japanese and Korean that require double-byte character sets. ANSI encodings were traditionally used as default system locales within Microsoft Windows, before the transition to Unicode. By contrast, OEM encodings, also known as DOS code pages, were defined by IBM for use in the original IBM PC text mode display system. They typically include graphical and line-drawing characters common in DOS applications. "Unicode"-encoded Microsoft Windows text files contain text in UTF-16 Unicode Transformation Format. Such files normally begin with Byte Order Mark (BOM), which communicates the endianness of the file content. Although UTF-8 does not suffer from endianness problems, many Microsoft Windows programs (i.e. Notepad) prepend the contents of UTF-8-encoded files with BOM, [2] to differentiate UTF-8 encoding from other 8-bit encodings. [3]

Additionally, POSIX defines a printable file as a text file whose characters are printable or space or backspace according to regional rules. This excludes most control characters, which are not printable. [6]

Prior to the advent of Mac OS X (now called macOS), the classic Mac OS system regarded the content of a file (the data fork) to be a text file when its resource fork indicated that the type of the file was "TEXT". [7] Lines of Macintosh text files are terminated with CR characters. [8]

When opened by a text editor, human-readable content is presented to the user. This often consists of the file's plain text visible to the user. Depending on the application, control codes may be rendered either as literal instructions acted upon by the editor, or as visible escape characters that can be edited as plain text. Though there may be plain text in a text file, control characters within the file (especially the end-of-file character) can render the plain text unseen by a particular method. 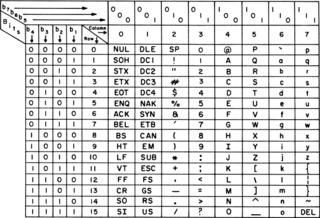 ASCII, abbreviated from American Standard Code for Information Interchange, is a character encoding standard for electronic communication. ASCII codes represent text in computers, telecommunications equipment, and other devices. Most modern character-encoding schemes are based on ASCII, although they support many additional characters. 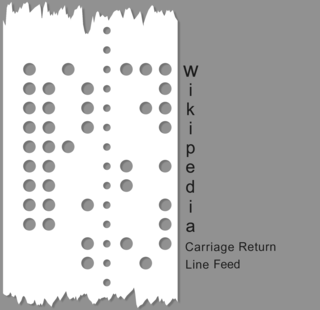 In computing, data storage, and data transmission, character encoding is used to represent a repertoire of characters by some kind of encoding system that assigns a number to each character for digital representation. Depending on the abstraction level and context, corresponding code points and the resulting code space may be regarded as bit patterns, octets, natural numbers, electrical pulses, etc. A character encoding is used in computation, data storage, and transmission of textual data. "Character set", "character map", "codeset" and "code page" are related, but not identical, terms.

In computing, plain text is a loose term for data that represent only characters of readable material but not its graphical representation nor other objects. It may also include a limited number of "whitespace" characters that affect simple arrangement of text, such as spaces, line breaks, or tabulation characters. Plain text is different from formatted text, where style information is included; from structured text, where structural parts of the document such as paragraphs, sections, and the like are identified; and from binary files in which some portions must be interpreted as binary objects.

Unicode is an information technology standard for the consistent encoding, representation, and handling of text expressed in most of the world's writing systems. The standard, which is maintained by the Unicode Consortium, defines 143,859 characters covering 154 modern and historic scripts, as well as symbols, emoji, and non-visual control and formatting codes. Unicode 14.0 is now in beta with 144,697 characters, including 5 new scripts, and 37 new emoji characters.

Web pages authored using hypertext markup language (HTML) may contain multilingual text represented with the Unicode universal character set. Key to the relationship between Unicode and HTML is the relationship between the "document character set", which defines the set of characters that may be present in a HTML document and assigns numbers to them, and the "external character encoding", or "charset", used to encode a given document as a sequence of bytes.

UTF-8 is a variable-width character encoding used for electronic communication. Defined by the Unicode Standard, the name is derived from UnicodeTransformation Format – 8-bit.

UTF-16 (16-bit Unicode Transformation Format) is a character encoding capable of encoding all 1,112,064 valid character code points of Unicode (in fact this number of code points is dictated by the design of UTF-16). The encoding is variable-length, as code points are encoded with one or two 16-bit code units. UTF-16 arose from an earlier obsolete fixed-width 16-bit encoding, now known as UCS-2 (for 2-byte Universal Character Set), once it became clear that more than 216 (65,536) code points were needed.

The byte order mark (BOM) is a particular usage of the special Unicode character, U+FEFFBYTE ORDER MARK, whose appearance as a magic number at the start of a text stream can signal several things to a program reading the text: 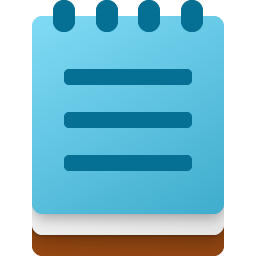 Windows Notepad is a simple text editor for Microsoft Windows and a basic text-editing program which enables computer users to create documents. It was first released as a mouse-based MS-DOS program in 1983, and has been included in all versions of Microsoft Windows since Windows 1.0 in 1985.

Mojibake is the garbled text that is the result of text being decoded using an unintended character encoding. The result is a systematic replacement of symbols with completely unrelated ones, often from a different writing system. 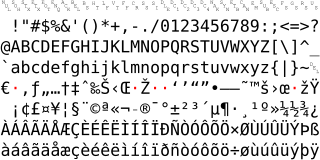 Windows-1252 or CP-1252 is a single-byte character encoding of the Latin alphabet, used by default in the legacy components of Microsoft Windows for English and many European languages including Spanish, French, and German.

UTF-7 is an obsolete variable-length character encoding for representing Unicode text using a stream of ASCII characters. It was originally intended to provide a means of encoding Unicode text for use in Internet E-mail messages that was more efficient than the combination of UTF-8 with quoted-printable.

uuencoding is a form of binary-to-text encoding that originated in the Unix programs uuencode and uudecode written by Mary Ann Horton at UC Berkeley in 1980, for encoding binary data for transmission in email systems.

A wide character is a computer character datatype that generally has a size greater than the traditional 8-bit character. The increased datatype size allows for the use of larger coded character sets.

This article compares Unicode encodings. Two situations are considered: 8-bit-clean environments, and environments that forbid use of byte values that have the high bit set. Originally such prohibitions were to allow for links that used only seven data bits, but they remain in some standards and so some standard-conforming software must generate messages that comply with the restrictions. Standard Compression Scheme for Unicode and Binary Ordered Compression for Unicode are excluded from the comparison tables because it is difficult to simply quantify their size.

Windows code pages are sets of characters or code pages used in Microsoft Windows from the 1980s and 1990s. Windows code pages were gradually superseded when Unicode was implemented in Windows, although they are still supported both within Windows and other platforms, and still apply when Alt code shortcuts are used.

Bush hid the facts is a common name for a bug present in some versions of Microsoft Windows, which causes text encoded in ASCII to be interpreted as if it were UTF-16LE, resulting in garbled text. When the string "Bush hid the facts", without newline or quotes, was put in a new Notepad document and saved, closed, and reopened, the nonsensical sequence of Chinese characters "畂桳栠摩琠敨映捡獴" would appear instead. 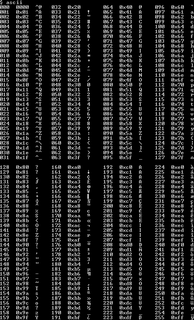 Extended ASCII character encodings are eight-bit or larger encodings that include the standard seven-bit ASCII characters, plus additional characters. Using the term "extended ASCII" on its own is sometimes criticized, because it can be mistakenly interpreted to mean that the ASCII standard has been updated to include more than 128 characters or that the term unambiguously identifies a single encoding, neither of which is the case.

Character encoding detection, charset detection, or code page detection is the process of heuristically guessing the character encoding of a series of bytes that represent text. The technique is recognised to be unreliable and is only used when specific metadata, such as a HTTP Content-Type: header is either not available, or is assumed to be untrustworthy.