Thomas Rowe VD , JP , FRIBA (20 July 1829 –14 January 1899) was a British-born architect,builder and goldminer who became one of Australia's leading architects of the Victorian era. [2] He was also a politician,who was the first Mayor of Manly.

Thomas Rowe was born in Penzance,Cornwall,United Kingdom,the eldest son of Richard Rowe and Ursula Mumford,and attended Barnes Academy. At 15 he became a draftsman in his father's building business before the family emigrated to Australia in 1848. From 1857 he practised as an architect in Sydney,Bathurst,Orange,Newcastle and Goulburn. As an architect he was often successful in competitions and his firms built commercial premises,large houses and many Methodist churches.

In 1872 he was elected alderman for Bourke Ward of the Sydney City Council,which he held until 1876. During his time on the council he worked on sanitation efforts related to improving the Sydney water supply. Rowe Street,which runs from Pitt Street to Castlereagh Street,was at that time named after him by in a vote by the council. [3]

In February 1877 he was elected to the first Manly Municipal Council and was elected first Mayor of Manly,overseeing the first laying-out of the town of Manly,and serving as an alderman until 1880. [4]

Rowe was also involved in the volunteer NSW Colonial Forces,receiving a commission as a lieutenant in the newly formed New South Wales Corps of Engineers in 1872,and was promoted to the rank of captain in 1874. [5]

When the Colonial Volunteer Force was disbanded and reorganised as the NSW Defence Force in 1878,Rowe was recommissioned a captain,and promoted to major in 1880. [5] Raised to rank of brevet Lieutenant Colonel in 1886,Rowe undertook a European tour the following year,visiting Aldershot,Chatham,Enfield,and Woolwich,in search of information relating to defence matters. [6] Rowe later designed several entrenching tools for the use of the engineers corps,including a bullet-proof shovel. Following the return to England of Colonel Henry Renny-Tailyour in 1894,Rowe took up the position of Commander of the New South Wales Corps of Engineers,was promoted to the rank of Colonel in 1895,and served until his retirement on 30 June 1898. [5] [7]

Rowe was also the founder,and for many years president,of the New South Wales Institute of Architects,and was elected a Fellow of the Royal Institute of British Architects in 1884. [8]

In 1888 the Premier Sir Henry Parkes appointed Rowe as the first President of the Board of Water Supply and Sewerage,and served in that office until his death,with the exception of the period 1892 to 1896 when Cecil West Darley presided. [9] [10] [11] His presidency was well-received,with an account after his death noting:"The great leaps and bounds by which the department has progressed,and its present state of efficiency,bear ample testimony to the capability of his administration." [6]

He died age 69 in January 1899 at Mona,his leased residence since 1881 in Darling Point. [12] [13] In accordance with his wishes "to be laid to rest near the sea",he was buried in his military uniform at Waverley Cemetery following a service at St Mark's Church,Darling Point. [14] [5]

(Many of the following buildings are heritage-listed): [15]

Rowe's son Harry Ruskin Rowe was also successful as an architect. One of his most significant achievements was the creation in 1950 of Ruskin Rowe,an estate in the Sydney suburb of Avalon. Rowe acquired a house,The Cabbage Trees,in the estate and used it as a weekender. The estate still exists and is heritage-listed. [23]

Warringah Council was a local government area in the northern beaches region of Sydney,in the state of New South Wales,Australia. It was proclaimed on 7 March 1906 as the Warringah Shire Council,and became "Warringah Council" in 1993. In 1992,Pittwater Council was formed when the former A Riding of Warringah Shire voted to secede. From this point on until amalgamation,Warringah Council administered 152 square kilometres (59 sq mi) of land,including nine beaches and 14 kilometres (9 mi) of coastline. Prior to its abolition it contained 6,000 hectares of natural bushland and open space,with Narrabeen Lagoon marking Warringah's northern boundary and Manly Lagoon marking the southern boundary.

Petersham is a suburb in the Inner West of Sydney,in the state of New South Wales,Australia. Petersham is located 6 kilometres south-west of the Sydney central business district,in the local government area of Inner West Council. Petersham is known for its extensive Portuguese commercial offerings,with many Portuguese businesses and restaurants,although only 156 (1.9%) of the population was actually born in Portugal. 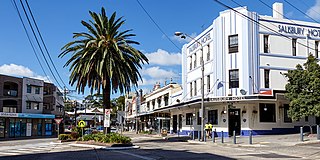 Stanmore is a suburb in the Inner West of Sydney,in New South Wales,Australia 6 kilometres south west of the Sydney central business district. It is part of the local government area of the Inner West Council. It is known for its long strip of shops running along Parramatta Road. 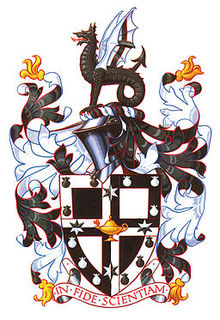 Newington College is a multi-campus independent Uniting Church single-sex and co-educational early learning,primary and secondary day and boarding school for boys,located in Stanmore,an inner-western suburb of Sydney,New South Wales,Australia. Established in 1863 at Newington House,Silverwater,the college celebrated its sesquicentenary in 2013. The college is open to boys of all faiths and denominations. Newington has been governed by an Act of Parliament since 1922. 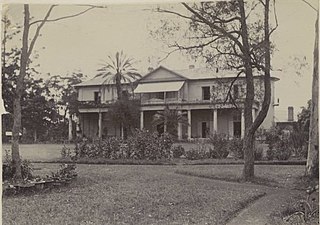 Newington House is a historic house in Silverwater,New South Wales,Australia and is located 20 kilometres (12 mi) west of the Sydney central business district,in the local government area of the City of Parramatta. The house and chapel are situated on the southern bank of the Parramatta River and are now enclosed by the Silverwater Correctional Centre. With Elizabeth Bay House and Camden Park,it is considered to be one of the three great houses of the County of Cumberland.

Major General Cedric Maudsley Ingram "Sandy" Pearson,was an Australian Army officer. He was a Commander of Australian Forces during the Vietnam War,Commandant of the Royal Military College,Duntroon and Director of the Royal Agricultural Society of New South Wales.

Wyvern House is one of the two independent Uniting Church single-sex primary day schools for boys of Newington College,that is located at 115 Cambridge Street,Stanmore,an Inner West suburb of Sydney,New South Wales,Australia. The other primary school is located at Lindfield,on Sydney's North Shore. Both schools are commonly called preparatory schools.

The Municipality of Petersham was a local government area of Sydney,New South Wales,Australia. The small municipality was proclaimed as a borough in 1871 and was centred on the suburbs of Lewisham,Petersham and Stanmore. It was bounded by Parramatta Road in the north,Cardigan and Liberty Streets in the east,Stanmore and New Canterbury Roads in the south,and Old Canterbury Road in the west. The municipality was divided into three wards:South Kingston,Annadale and Sydenham,all the names of early farms. The boundaries remained fairly stable,with only minor changes on the east and western sides. The borough became a municipality in 1906. In 1949 under the Local Government (Areas) Act 1948,Petersham council was merged with the larger neighbouring Marrickville Council which was located immediately to the south.

Henry "Harry" Ebenezer Budden was a Sulman Award winning Australian architect active in the first 40 years of the 20th century. His work encompassed the styles of the Federation Arts and Crafts and Bungalow through to the Inter-War Stripped Classical and Art Deco. He was a leader of his profession and in the wider community,serving as the first Australian War Chest Commissioner during World War I. 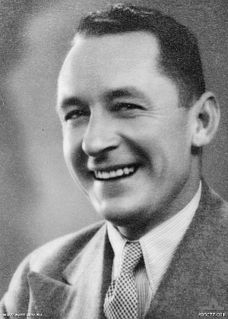 Milton Sydney Love,invariably referred to as M. S. Love,was an Australian Stipendiary Magistrate in New South Wales and the founding Warden of the Southern Mining District of NSW.

The Wesleyan Theological Institution was from 1863 until 1914 an Australian Methodist theological college located firstly in Silverwater,New South Wales and from 1881 at Stanmore,New South Wales.

Lord Livingstone "Livie" Ramsay was an Australian architect active in the first quarter of the 20th century. He was known professionally as L L Ramsay. His work encompassed the styles of the Federation Bungalow in domestic design and Federation Free Classical in civic and commercial design. He was active in local government and was President of Hornsby Shire.

George Allen Mansfield was a prominent Australian architect of the nineteenth century who designed many iconic buildings in Sydney,New South Wales,Australia.

Rupert Howard Grove was an Australian solicitor and a prominent Methodist and Uniting Church layman. The Australian Dictionary of Biography states that,"in the progression towards the union of the Congregational,Methodist and Presbyterian churches in Australia,Grove made a decisive impact." 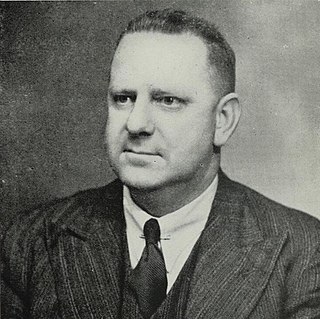 Lindsay Gordon Scott ARAIA was a prominent Sydney architect best associated for his design of the Erskineville Town Hall and numerous surf pavilions in New South Wales,including several on the Northern Beaches of Sydney.