Thomas Zacharia (born 1957 in Kerala, India) is an Indian-born American computer scientist. He received his bachelor's degree in mechanical engineering from National Institute of Technology, Karnataka in 1980 and a master's degree in Materials Science from the University of Mississippi in 1984. He obtained his doctoral degree from Clarkson University in 1987.

He has contributed to research in computational materials science, particularly on Marangoni Effect in solidification processes. [1] He previously served as the executive vice president and chief port officer captain at Qatar Science and Technology Park [2] at Qatar Foundation. [3]

Zacharia was previously deputy director for science and technology at Oak Ridge National Laboratory [4] and a professor at the University of Tennessee [5] .

Oak Ridge National Laboratory (ORNL) is an American multiprogram science and technology national laboratory sponsored by the U.S. Department of Energy (DOE) and administered, managed, and operated by UT–Battelle as a federally funded research and development center (FFRDC) under a contract with the DOE. Established in 1942, ORNL is the largest science and energy national laboratory in the Department of Energy system by size and by annual budget. ORNL is located in Oak Ridge, Tennessee, near Knoxville. ORNL's scientific programs focus on materials, neutron science, energy, high-performance computing, systems biology and national security.

The Center for Nanophase Materials Sciences(CNMS) was the first to open of the five Nanoscale Science Research Centers the United States Department of Energy sponsors. The Center's location is in Oak Ridge, Tennessee. The CNMS is a collaborative nanoscience user research facility for the synthesis, characterization, theory/ modeling/ simulation, and design of nanoscale materials and is co-located with Spallation Neutron Source. 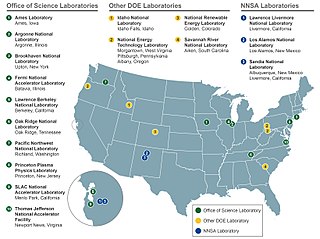 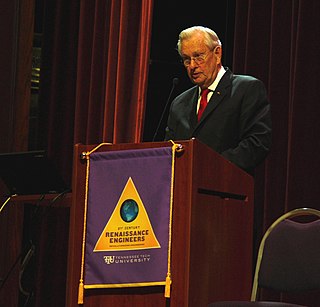 Arden Lee Bement Jr. is an American engineer and scientist and has served in executive positions in government, industry and academia. He is a former Deputy Undersecretary of Defense for Research and Advanced Technology, Chief Technical Officer of TRW, Director of the National Science Foundation (NSF) and Director of the National Institute of Standards and Technology (NIST). Following the end of his six-year term at NSF, on June 1, 2010 he became the founding director of the Global Policy Research Institute and Chief Global Affairs officer at Purdue University.

Oak Ridge Associated Universities (ORAU) is a consortium of American universities headquartered in Oak Ridge, Tennessee, with an office in Washington, D.C., and staff at several other locations across the country. 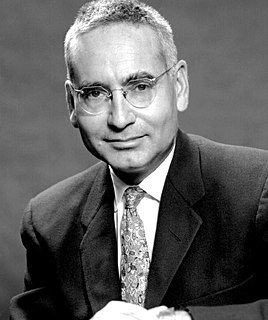 Alvin Martin Weinberg was an American nuclear physicist who was the administrator at Oak Ridge National Laboratory (ORNL) during and after the Manhattan Project. He came to Oak Ridge, Tennessee, in 1945 and remained there until his death in 2006. He was the first to use the term "Faustian bargain" to describe nuclear energy.

Qatar University is a public research university in Qatar, located on the northern outskirts of the capital Doha. As of 2014, there are over 16,000 students. Courses are taught in Arabic or English. The university is the only government university in the country. The university hosts ten colleges – Arts and Sciences, Business and Economics, Education, Engineering, Law, Sharia and Islamic Studies, Pharmacy, College of Health Science, College of Medicine, and the latest College of Dental Medicine – with a total of almost 8000 students at a 13:1 student-teacher ratio.

Dr. Alvin Trivelpiece, retired Director of Oak Ridge National Laboratory (ORNL), former Executor Officer of American Association for the Advancement of Science (AAAS), and former Director of the Office of Energy Research, U.S. Department of Energy (DOE). He has also been a professor of physics and a corporate executive. Throughout his varied career, Dr. Trivelpiece's research focused on plasma physics, controlled thermonuclear research, and particle accelerators. He has several patents on accelerators and microwave devices.

Oak Ridge School of Reactor Technology (ORSORT) was the successor of the school known locally as the Clinch College of Nuclear Knowledge, later shorten to Clinch College. ORSORT was authorized and financed by the U.S. government and founded in 1950 by Admiral Hyman G. Rickover and Alvin Weinberg. During its existence, the school was the only educational venue in the U.S. from where a comprehensive twelve-month education and training in either "Reactor Hazards Analysis" or "Reactor Operations" could be obtained, with accompanying certificates. Funding ended and the school was closed in 1965, shortly after authorization was extended to select U.S. universities to develop their own Nuclear Engineering curricula. Housed at the Oak Ridge National Laboratory, this unique venue and its renowned instructors offered its students the highest level of education of practical applications of atomic energy available at the time, and first-hand exposure to a variety of nuclear reactor designs including the legendary first graphite reactor, pool reactor, high temperature gas reactor, molten salt reactor, fast reactor and high flux reactor.

Herman Postma was an American scientist and educational leader. Born in Wilmington, North Carolina, he moved to Oak Ridge, Tennessee, in 1959 after attending Duke, Harvard and MIT. Much of Postma's career was at Oak Ridge National Laboratory where he served as Laboratory Director from 1974 to 1988.

David Joseph Singh is a theoretical physicist who is a curators' professor in the Department of Physics and Astronomy at the University of Missouri in Columbia, Missouri. He was previously a corporate fellow at the Oak Ridge National Laboratory (ORNL).

Valerie E. Taylor is an African American computer scientist who is the director of the Mathematics and Computer Science Division of Argonne National Laboratory in Illinois. Her research includes topics such as performance analysis, power analysis, and resiliency. She is known for her work on "Prophesy," described as "a database used to collect and analyze data to predict the performance on different applications on parallel systems."

The Institute for Functional Imaging of Materials (IFIM) is an organization set up in 2014, within the Oak Ridge National Laboratory (ORNL) situated in Oak Ridge, Tennessee, USA. The goal of the institute is to provide a bridge between modeling and applied mathematics and imaging data collected from various forms of microscopy available at ORNL. The current director of the IFIM is Sergei Kalinin who was awarded the Medal for Scanning Probe Microscopy by the Royal Microscopical Society. The institute supports President Obama’s Materials Genome Initiative.

Stephen E. Nagler is a Canadian condensed matter and materials science physicist. Residing in Knoxville, Tennessee, Nagler is the Corporate Research Fellow of the Oak Ridge National Laboratory (ORNL) and the Director of the laboratory's Quantum Condensed Matter Division. He is an adjunct professor with the Department of Physics at the University of Tennessee.

The College of Engineering (CENG) at Qatar University was established in 1980. The college offers both undergraduate and graduate courses. The motto of the college is “Challenge. Empower. Next. Generations.” The mission of the College of Engineering is “to prepare globally competent and socially responsible graduates by providing high quality education. The college through its quality programs and partnerships fosters research and scholarly endeavors that advance knowledge and contributes to the welfare of the country.”

Linda L. Horton is the Director of the Materials Sciences and Engineering Division at the United States Department of Energy's Office of Basic Energy Sciences (BES).

Vincent Meunier is a Belgian/American condensed matter and materials physicist known for his theoretical and computational research on electronic, optoelectronic, and structural properties of low-dimensional materials. Among his contributions are the quantum mechanical description of processes responsible for scanning tunneling image formation in low-dimensional materials, the development of a microscopic theory of nanocapacitors, and contributions to the theory of electronic transport and ultra-low frequency vibrational modes in van der Waals heterostructures. He is the Head and Professor in the Physics, Applied Physics, and Astronomy Department at Rensselaer Polytechnic Institute (RPI) in Troy, New York, USA where he holds the Gayl and Jeffrey Kodosky Constellation Chair in Physics. He is a Fellow of the American Physical Society (APS), of the Institute of Physics (IOP), and of the American Association for the Advancement of Science (AAAS).