Thornton is a name sometimes used [1] for part of a suburb in western Hamilton in New Zealand. [2] 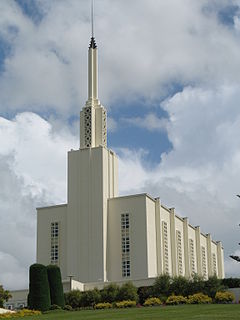 The Hamilton New Zealand Temple is the 13th constructed and 11th operating temple of The Church of Jesus Christ of Latter-day Saints. Located just outside the city of Hamilton, New Zealand in the suburb of Temple View, it was built with a modern single-spire design very similar to the Bern Switzerland Temple.

Sandhurst Town Football Club is a semi-professional football club based in Sandhurst, Berkshire, England. Formed in 1910, the club plays at Bottom Meadow. They play in the Combined Counties League Division One. 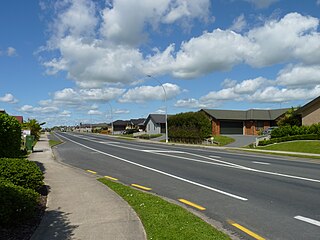 Rototuna is a suburb in northern Hamilton, New Zealand, east of Flagstaff. It was built on what was previously the bed of an ancient lake of which Rototuna was a tiny remnant. It is one of the newest and fastest-growing suburbs in Hamilton, along with Neighbouring Huntington and Flagstaff.

Hamilton Central is the central business district of Hamilton, New Zealand. It is located on the western banks of the Waikato River.

Western Heights is a suburb on the western boundary of the city of Hamilton in the Waikato region of the North Island of New Zealand.

Dame Grace Hilda Cuthbertha Ross, known as Hilda Ross, was a New Zealand politician for the National Party and an activist.

Crawshaw is a compact suburb, close to Te Rapa railway depot, in western Hamilton in New Zealand, and extended in the 2018 census to cover 0.86 km2. Although sometimes referred to as a suburb in its own right, it is often described as being part of Nawton.

Dinsdale is the westernmost suburb of Hamilton in New Zealand. Originally called Frankton West, it was renamed in July 1961 after Thomas Dinsdale. Dinsdale grew rapidly in the 1960s. It is located around a low ridge with some views westward to open farm land. It has a large sports ground and shopping complex with a supermarket, shops and Dinsdale Library, one of the branches of the Hamilton City Libraries. The community church of West Hamilton is located in the suburb.

Grandview Heights is a suburb in western Hamilton in New Zealand.

Livingstone is a suburb in western Hamilton in New Zealand. J Livingstone, who the suburb is named after, owned and subdivided a large proportion of the area in 1916. The suburb became a part of Hamilton in 1962.

Pukete is a 1970s riverside suburb in northwestern Hamilton in New Zealand.

Stonebridge, also known as Stonebridge Estate, is a suburb close to the western boundary of Hamilton in New Zealand. It adjoins Dinsdale to the east and Western Heights to the north. The suburb was farmland until development began about 1996; a large farming operation still takes place in the land between sections today. The land is mainly rolling with a winding gully. Developers have modified the existing vegetation and landscape to create a series of ponds connected by a creek.

Ashmore is a name used for a suburb in north-eastern Hamilton in New Zealand by Hamilton City Council on its 2010 map and by the developer, CDL Land New Zealand Limited. It is more commonly described as being part of Rototuna North. It is in Rototuna Central census area.

Harrowfield is a suburb in eastern Hamilton in New Zealand. It was built in about 1991.

Magellan Rise is a new suburb in north-eastern Hamilton in New Zealand. In the 2018 census it is at the boundaries of Flagstaff North, East and South areas and is described by others as Flagstaff.

St Petersburg is a suburb in north-eastern Hamilton in New Zealand. In the 2013 census it was in meshblock 0951707, which was part of Sylvester area and had a population of 822 in 240 houses. In 2018 that meshblock was split into 4 meshblocks and is part of Flagstaff South. Others also describe it as part of Flagstaff.

During the 2003-04 English football season, AFC Wimbledon competed in the Combined Counties League Premier Division. The Dons won their first 21 league games before a 2–2 draw against Sandhurst Town on 10 January 2004, giving them 32 consecutive wins in league games over two seasons. AFC Wimbledon became the only club in England at any level to maintain a perfect league record for the 2003–04 season. Despite the suspension of Eames on 13 February 2004, AFC Wimbledon's success continued under caretaker manager Nicky English, whose first game in charge resulted in a club away record of a 9–0 victory over Chessington United on 14 February 2004. English holds the record to date of being the only AFC Wimbledon manager never to lose a match. Terry Eames was subsequently officially sacked on 18 February 2004 for gross misconduct following a disciplinary hearing. The team went on to finish as champions of the Combined Counties League, with an unbeaten record for the season, consisting of 42 wins and 4 draws. Promotion to the Isthmian League First Division was therefore assured, and the club even completed a double by winning the league's Premier Challenge Cup after beating North Greenford United 4-1 in the Final on 30 April 2004. The Dons took part in the FA Vase for the first and only time, reaching the Fourth Round before succumbing to Colne, losing 2–1 on 17 January 2004 in front of a crowd of 3,215, the highest recorded attendance in the competition that year other than at the final.