Thrash Rally [lower-alpha 1] [lower-alpha 2] is a top-down perspective rally racing video game developed by ADK and released by SNK Corporation for the Neo Geo system. It was released by SNK on December 20, 1991 and would be followed by an spiritual successor in 1996, Over Top . [1] [2]

Players begin by choosing a vehicle based on handling, acceleration, and overall speed. The game is played from an overview perspective with the camera focused on the players car at all times. The races take place from the 1992 World Rally Championship and the 1992 Paris–Cape Town Dakar Rally with a variety of terrain.

In Japan, Game Machine listed Thrash Rally on their December 15, 1991 issue as being the sixteenth most-successful popular arcade game at the time. [19] On release, [20] Next Generation reviewed the Neo-Geo version of the game, rating it one star out of five, and stated that "For mindless fun, Rally Chase comes in at about average." [7] Famicom Tsūshin scored the Neo Geo version a 22 out of 40. [5] Setsu of French magazine HardCore Gamers drew comparison with Micro Machines . [21]

On 11/1/2018, it was announced that Thrash Rally would be coming to the Nintendo Switch as a part of the Neo Geo series of games released by Hamster.

NAM-1975 is a war shooting gallery arcade video game developed and originally published by SNK on April 26, 1990. It was one of the launch titles for both the Neo Geo MVS (arcade) and Neo Geo AES (home) platforms, in addition of being the only title in the system that does not feature the Neo Geo boot screen in its attract mode, as well as one of the pack-in games for the AES.

3 Count Bout is a wrestling arcade game released by SNK in 1993.

Alpha Mission II is a vertically scrolling full screen shoot 'em up released by SNK in 1991 for the Neo Geo arcade and home systems. As the name suggests, it is the sequel to the 1985 arcade game Alpha Mission. It was later released for the Neo Geo CD in 1994 and for the PlayStation Portable in 2010.

Baseball Stars Professional is a baseball arcade video game developed and originally published by SNK on 26 April, 1990. A follow-up to the original Baseball Stars on Nintendo Entertainment System, it was one of the launch titles for both the Neo Geo MVS (arcade) and Neo Geo AES (home) platforms, in addition of also being one of the pack-in games for the AES, as well as the first baseball title released for the Neo Geo. 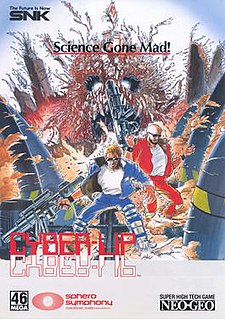 Cyber-Lip is a horizontally scrolling, side-view platformer shoot 'em up arcade game released by SNK in 1990 for the SNK Neo-Geo MVS.

Last Resort is an arcade shoot 'em up video game by SNK released in 1992. It was also released for the Neo-Geo and Neo Geo CD systems, SNK Arcade Classics Vol. 1 for the PS2, PSP, and Wii, as well as ACA Neo-Geo for the PS4 and Xbox One. Its gameplay was heavily inspired by R-Type and its system of a pod attached to the player's ship.

Blue's Journey is a side-scrolling platform game released by Alpha Denshi in Summer 1991 on SNK's Neo Geo MVS arcade system and their AES home system. It was ported to the Neo Geo CD in 1994. It was rereleased on the Wii's Virtual Console in Europe on November 9, 2007, followed by North America on November 12, 2007.

Top Hunter: Roddy & Cathy is a side scrolling arcade platform game developed by SNK for the Neo Geo in 1994. It was also released on the Neo Geo CD, and the Wii Virtual Console. The game has been re-released as part of SNK Arcade Classics Vol. 1, on May 1, 2008, and in the ACA Neo Geo series on PlayStation 4 on January 10, 2018. Its development team consisted of former Irem staff members.

Ninja Commando is a top-down, vertically scrolling run and gun video game developed by Alpha Denshi and published by SNK. It was first released for the Neo Geo in 1992 in cartridge format, and in 1994 for the Neo Geo CD.

The Super Spy is an early Neo Geo game released by SNK in 1990. It is a first-person shooter and beat 'em up game with action RPG elements in which players move through the many floors of an office building shooting terrorists. It is a first-person game where the player character's arms and weapons are visible on screen. In 1991, ADK's Crossed Swords had similar gameplay, but with more RPG elements and hack & slash combat instead of shooting and fist-fighting.

Ghost Pilots is a vertically scrolling shoot 'em up arcade game released in 1991 by SNK. The gameplay is straightforward with elements similar to that of Capcom's 194X games. Unlike most scrolling shooters, the vehicle is a seaplane instead of a spaceship or airplane.

League Bowling is an arcade game released in 1990 by SNK for the Neo Geo console and arcade systems. The game was unique in that it was the first arcade to put emphasis on bowling. The players controls characters with red and blue hair and can select balls from 8 to 15 pounds.

Sengoku 2 is a beat 'em up arcade game. It is the second game of the Sengoku series by SNK. It was ported to the Neo Geo and Neo Geo CD consoles. In 2009 the series was compiled on a CD titled Sengoku Anthology for the PlayStation 2 and Windows. The Neo Geo version was re-released on the Japanese Virtual Console in November 8, 2012 and for the PAL region on February 7, 2013, On March 1, 2018, The game got re-released on Arcade Archives. 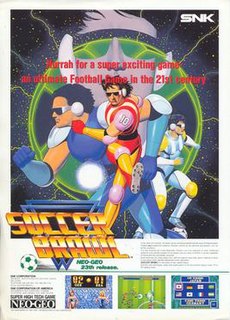 Soccer Brawl is a futuristic soccer game first released in arcades on February 14, 1992. It was available on the Neo Geo on March 13 the same year and later for the Neo Geo CD on March 31, 1995.

Robo Army is a beat 'em up video game developed and published by SNK that was released for Neo Geo arcades and home consoles in 1991 and the Neo Geo CD in 1995.

Eight Man is a side-scrolling beat 'em up arcade video game developed by Pallas and published internationally by SNK for both the Neo Geo MVS (arcade) and Neo Geo AES (home) platforms in 1991. It is based on Kazumasa Hirai's 1963 manga and anime superhero of the same name, who is considered one of the earliest cyborg superhero characters from Japan. Staying true to its concept of a crime-fighting super-robot, players take the role of 8 Man and his robo-comrade 9 Man respectively in a fight against an invading evil robot army. The game received mixed reception from both critics and reviewers alike since its initial release, who widely panned the gameplay for being tedious and relying too much on the gimmick of its speed-running effect.

Riding Hero is a hybrid racing/role-playing arcade video game developed and originally published by SNK on July 24, 1990. It was the first title for both the Neo Geo MVS (arcade) and Neo Geo AES (home) platforms that featured "Multi Play" (Multi-Link) support, which allowed two systems to be connected via a phone jack port integrated into each cartridge for versus LAN play.

Football Frenzy is an American football arcade video game developed and originally published by SNK on January 31, 1992. It was the second football game created by SNK after 1987's Touch Down Fever, as well as the only football game released for the Neo Geo platform. 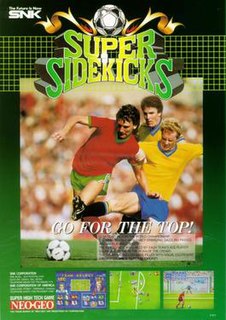 Super Sidekicks is a 1992 soccer arcade video game developed and published by SNK. It is the first installment in the eponymous series and the second soccer game released for Neo Geo MVS, preceding Soccer Brawl (1991). Featuring an arcade-style approach to soccer compared to other games released at the time, the title allows players to choose any of the available game modes with AI-controlled opponents or other human players with the team of their choosing. Its gameplay uses a simplified two-button configuration.