The three-banded warbler (Basileuterus trifasciatus) is a species of bird in the family Parulidae. It is found in Ecuador and Peru. Its natural habitats are subtropical or tropical moist montane forests and heavily degraded former forest.

The wood warbler is a common and widespread leaf warbler which breeds throughout northern and temperate Europe, and just into the extreme west of Asian Russia in the southern Ural Mountains. The genus name Phylloscopus is from Ancient Greek phullon, "leaf", and skopos, "seeker". The specific sibilatrix is Latin for "whistler".

The Arctic warbler is a widespread leaf warbler in birch or mixed birch forest near water throughout its breeding range in Fennoscandia and the northern Palearctic. It has established a foothold in North America, breeding in Alaska. This warbler is strongly migratory; the entire population winters in southeast Asia. It therefore has one of the longest migrations of any Old World insectivorous bird.

The melodious warbler is an Old World warbler in the tree warbler genus Hippolais. It breeds in southwest Europe and northwest Africa. It is migratory, wintering in sub-Saharan Africa. This small passerine bird is a species found in open woodland with bushes. Three to five eggs are laid in a nest in a tree or a bush. This is a common bird in many parts of its wide range and the International Union for Conservation of Nature has rated its conservation status as being of "least concern". 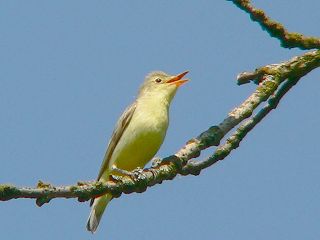 The icterine warbler is an Old World warbler in the tree warbler genus Hippolais. It breeds in mainland Europe except the southwest, where it is replaced by its western counterpart, melodious warbler. It is migratory, wintering in sub-Saharan Africa.

The Bay-breasted Warbler is a small species of songbird in the New World warbler family, Parulidae. It is one of thirty-four species in the diverse genus Setophaga. Like all songbirds, or passerines, the species is classified in the order Passeriformes.

The black-and-white warbler is a species of New World warbler, and the only member of its genus, Mniotilta.

The mourning warbler is a small songbird of the New World warbler family. Mourning warblers are native to eastern and central North America as well as some countries in Central America. They are neotropical migrants and tend to be found in dense second growth forests. They are under the Wood-warbler category, which consists of arboreal and terrestrial colorful passerines. Wood warblers are in the order Passeriformes, which are perching birds including more than half of all bird species, and the family Parulidae which also includes the Common Yellowthroat, Black and White Warbler, Nashville Warbler, ovenbird, and American Redstart. They are very similar to the MacGillivray’s warbler in appearance, especially in females and immature birds, but their breeding range does not overlap into the west. 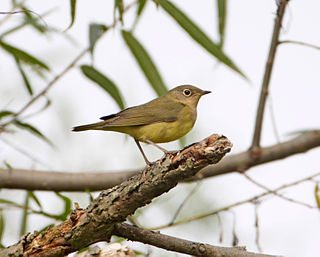 The Connecticut warbler is a small songbird of the New World warbler family. 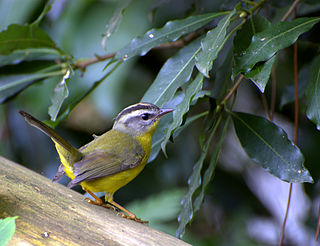 The golden-crowned warbler is a small New World warbler.

The Kentucky warbler is a small species of New World warbler. It is a sluggish and heavy warbler with a short tail, preferring to spend most of its time on or near the ground, except when singing. 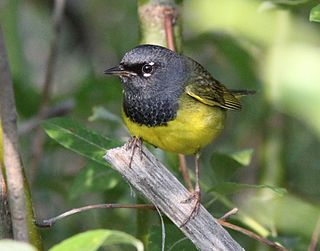 The MacGillivray's warbler is a species of New World warbler. These birds are sluggish and heavy warblers, preferring to spend most of their time on, or near the ground, except when singing.

The elfin woods warbler is a bird, endemic to Puerto Rico, where it is a local and uncommon species. Discovered in 1968 and described in 1972, it is the most recently described species of New World warbler.

Adelaide's warbler is a bird endemic to the archipelago of Puerto Rico belonging to the genus Setophaga of the family Parulidae. The species is named after Adelaide Swift, daughter of Robert Swift, the person who captured the first specimen. 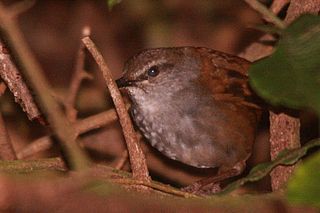 The chestnut-backed bush warbler is a species of Old World warbler in the family Locustellidae. Other common names include the chestnut-backed grass warbler, the cinnamon bracken warbler and the East Indian bush warbler. It is endemic to the islands of Sulawesi, Buru and Seram in Indonesia where it is found on the forest floor. 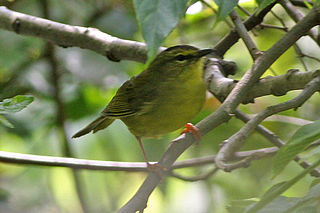 The two-banded warbler is a species of bird in the family Parulidae. It is found in Argentina, Bolivia, Brazil, Guyana, Peru, and Venezuela. Its natural habitats are subtropical or tropical moist montane forests and heavily degraded former forest.

The three-striped warbler is a species of bird in the family Parulidae. It was previously considered conspecific with the Tacarcuna warbler and the black-eared warbler.

The riverbank warbler, sometimes known as the Neotropical river warbler or just river warbler, is a species of bird in the family Parulidae.

The white-winged warbler, also called Hispaniolan highland-tanager, is a species of bird classified in the Phaenicophilidae family. It is the only member of the genus Xenoligea, and is found solely in Haiti and the Dominican Republic, which share the island of Hispaniola. 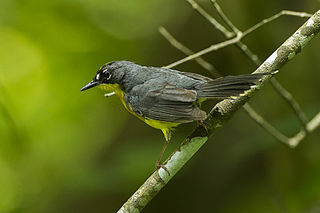 The fan-tailed warbler is a New World warbler in the genus Basileuterus that lives along the Pacific slope from northern Mexico to Nicaragua. Vagrant records exist for Arizona, New Mexico and Texas. It is yellow on its throat and underparts with a tawny wash on its chest. The head is gray with a black-framed yellow crown and white around the eyes. The undertail coverlets are white. They are 5.8-6.3 in (14.5–16 cm) long and have pleasant, upslurred song. Fan-tailed warblers live in and at the edge of evergreen and semideciduous forest, especially near ravines. They eat ants, especially army ants, and are seen hopping around on either the forest floor or close to it. They are found alone or in pairs.