In the Book of Mormon, the Three Nephites (also known as the Three Nephite Disciples) are three Nephite disciples of Jesus who were blessed by Jesus to "never taste of death; but ye shall live to behold all the doings of the Father unto the children of men, even until all things shall be fulfilled according to the will of the Father, when I shall come in my glory with the powers of heaven." [1] As described in Third Nephi chapter 28, this change occurred when they were caught up into heaven. [2] [3] Since they will never "taste death", in the Book of Mormon the Nephite prophet Mormon contemplates if they are already immortal. [4] After Mormon prays for wisdom, Jesus tells him that there would be another change made at his coming so that they may become immortal. [5]

Similar to Mormon beliefs about John the Apostle, the Three Nephites were granted immortality so that they could "bring the souls of men unto Jesus, while the world shall stand". [6] The account in the Book of Mormon reads that they "did minister unto all the people, uniting as many to the church as would believe in their preaching; baptizing them, and as many as were baptized did receive the Holy Ghost." [7] Also similar to other stories about missionaries and martyrs, the text says that they suffered severe persecution from those who did not believe.

Their longevity is referred to later by Mormon, who lived about four hundred years after the three Nephites in the Book of Mormon's timeline. He says "I have seen them, and they have ministered unto me." [8] Mormon also wrote that they will be among the Jews and the Gentiles, and the Jews and Gentiles "shall know them not." "[And] when the Lord seeth fit in his wisdom that they shall minister unto all the scattered tribes of Israel, and unto all nations, kindreds, tongues and people, and shall bring out of them unto Jesus many souls." [9]

Mormon states that he intended to write the names of the Three Nephites, but God forbade him to do so. [10]

The Book of Jacob: The Brother of Nephi, usually referred to as the Book of Jacob, is the third of fifteen books in the Book of Mormon. According to the text, it was written by the ancient prophet Jacob. The purpose of the book, in his own words, is to persuade all men to "come unto Christ". While this book contains some history of the Nephites, including the death of Nephi, it is mainly a record of Jacob's preachings to his people. Chapter 5 contains the Parable of the Olive Tree, which is the longest chapter in the Book of Mormon, and which is a lengthy allegory of the scattering and gathering of Israel, comparing the Israelites and gentiles to tame and wild olive trees, respectively. Jacob is seven chapters long.

The First Book of Nephi: His Reign and Ministry, usually referred to as First Nephi or 1 Nephi, is the first book of the Book of Mormon and one of four books with the name Nephi. The original translation of the title did not include the word "first". First and Second were added to the titles of the Books of Nephi by Oliver Cowdery when preparing the book for printing. It is a first-person narrative by a prophet named Nephi, of events that began around 600 BC and recorded on the small plates of Nephi approximately 30 years later. Its 22 chapters tell the story of one family's challenges and the miracles they witness as they escape from Jerusalem, struggle to survive in the wilderness, build a ship and sail to the Americas. The book is composed of two intermingled genres; one a historical narrative describing the events and conversations that occurred and the other a recording of visions, sermons, poetry, and doctrinal discourses as shared by either Nephi or Lehi to members of the family. The book is twenty-two chapters long.

The Second Book of Nephi, usually referred to as Second Nephi or 2 Nephi, is the second book of the Book of Mormon. The original translation of the title did not include the word "second". First and Second were added to the titles of The Books of Nephi by Oliver Cowdery when preparing the book for printing. According to the book, it was written by the ancient prophet Nephi, son of Lehi, who lived around 600 BC. The book is thirty three chapters long.

The Book of Nephi: The Son of Nephi, Who Was the Son of Helaman, usually referred to as Third Nephi or 3 Nephi, is one of fifteen books that make up the Book of Mormon. This book was first called "III Nephi" in the 1879 edition and "Third Nephi" in the 1920 edition of the Book of Mormon. It contains an account of the visit of Jesus Christ to the inhabitants of ancient America. Jesus had told his disciples in Jerusalem according to the Bible in the Gospel of John, "And other sheep I have, which are not of this fold: them also I must bring, and they shall hear my voice; and there shall be one fold, and one shepherd." In this book, Christ declares to those in ancient America that they were these "other sheep" of whom he spoke. The account of this visit is recorded beginning in chapter 11 of 3 Nephi.

According to the Book of Mormon, the Nephites are one of four groups to have settled in the ancient Americas. The term is used throughout the Book of Mormon to describe the religious, political, and cultural traditions of the group of settlers.

The Book of Mormon is the name of a book, or subdivision, of the larger Book of Mormon. This "inner" book has nine chapters. According to the text, the first seven chapters were abridged by the prophet Mormon and the last two by his son Moroni. These men were given a sacred charge to observe the destruction of their people for their wickedness and failure to repent; and to record their observations on metal plates which would be hidden until the Lord would reveal them to the world at a future time.

Early Mormonism had a range of doctrines related to race with regards to black people of African descent. References to black people, their social condition during the 19th & 20th century, and their spiritual place in Western Christianity as well as in Mormon scripture was complicated.

The Book of Moroni is the last of the books that make up the Book of Mormon. According to the text it was written by the prophet Moroni sometime between 400 and 421. Moroni consists of ten chapters.

Nephi is one of the central figures described in the Book of Mormon. He was a son of Lehi, a prophet, founder of the Nephite people, and author of the first two books of the Book of Mormon, First and Second Nephi.

Mormon is believed by members of The Church of Jesus Christ of Latter-day Saints to be a prophet-historian and a member of a tribe of indigenous Americans known as the Nephites, one of the four groups described in the Book of Mormon as having settled in the ancient Americas. 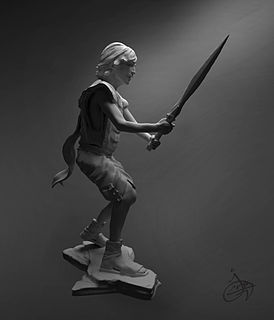 According to the Book of Mormon, the Anti-Nephi-Lehies were an ethnic group of Lamanites formed around 90 BC, after a significant religious conversion. They made a covenant that they would not participate in war, and buried their weapons. Eventually they changed their name to The People of Ammon, or Ammonites. During a later period of warfare, the young men of the group who had not made the pacifist covenant became a military unit known as the Two Thousand Stripling Warriors, and were protected by divine intervention.

According to the Book of Mormon Nephi, along with his brother Lehi, was a Nephite missionary. His father was Helaman, and his sons include two of the twelve Nephite disciples at the time that Christ visited the Americas.

According to the Book of Mormon, Lehi was a son of Helaman and was a Nephite missionary. He and his elder brother Nephi lived in the 1st century BC and had many missionary experiences together. The main events of their missions are recorded in the fifth chapter of The Book of Helaman. Lehi was named after his ancestor, Lehi, whose family immigrated to the New World from Jerusalem around 600 BC. Helaman taught his two sons to keep the commandments and to walk uprightly before God, as their namesakes had done.

According to the Book of Mormon, Nephithe Disciple was a Nephite prophet during the 1st century, and a chosen disciple of Jesus Christ. Nephi's ministry was centered on Christ, and included prophesying of His birth, working miracles in His name, witnessing His visitation to the Americas after the Resurrection, and administering His church after He had ascended. Nephi was also the appointed recordkeeper for the Nephites during this period, and much of the text of Third Nephi is abridged from his account.

Moroni, according to the Book of Mormon, was the last Nephite prophet, historian, and military commander who lived in the Americas in the late fourth and early fifth centuries. He is later known as the Angel Moroni, who presented the golden plates to Joseph Smith, who translated the plates upon which the Book of Mormon was originally written.

The following outline is provided as an overview of and topical guide to the Book of Mormon: