Thrombopoietic agents are drugs that induce the growth and maturation of megakaryocytes. [1] Some of them are currently in clinical use: romiplostim, [2] eltrombopag, oprelvekin (a recombinant interleukin 11) and thrombopoietin. Several others are under clinical investigation such as lusutrombopag and avatrombopag.

A megakaryocyte is a large bone marrow cell with a lobated nucleus responsible for the production of blood thrombocytes (platelets), which are necessary for normal blood clotting. Megakaryocytes usually account for 1 out of 10,000 bone marrow cells in normal people, but can increase in number nearly 10-fold during the course of certain diseases. Owing to variations in combining forms and spelling, synonyms include megalokaryocyte and megacaryocyte. 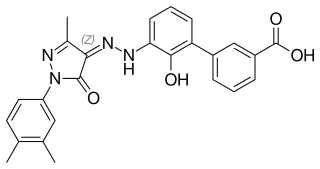 Eltrombopag is a medication that has been developed for certain conditions that lead to thrombocytopenia. It is a small molecule agonist of the c-mpl (TpoR) receptor, which is the physiological target of the hormone thrombopoietin. Eltrombopag was discovered as a result of research collaboration between GlaxoSmithKline and Ligand Pharmaceuticals. Designated an orphan drug in the United States and European Union, it is being manufactured and marketed by Novartis under the trade name Promacta in the USA and is marketed as Revolade in the EU. Novartis acquired the drug as a part of its asset swap deal with GlaxoSmithKline.

Evidence-based medicine (EBM) is an approach to medical practice intended to optimize decision-making by emphasizing the use of evidence from well-designed and well-conducted research. Although all medicine based on science has some degree of empirical support, EBM goes further, classifying evidence by its epistemologic strength and requiring that only the strongest types can yield strong recommendations; weaker types can yield only weak recommendations. The term was originally used to describe an approach to teaching the practice of medicine and improving decisions by individual physicians about individual patients. Use of the term rapidly expanded to include a previously described approach that emphasized the use of evidence in the design of guidelines and policies that apply to groups of patients and populations. It has subsequently spread to describe an approach to decision-making that is used at virtually every level of health care as well as other fields.

Pathology is the study of the causes and effects of disease or injury. The word pathology also refers to the study of disease in general, incorporating a wide range of bioscience research fields and medical practices. However, when used in the context of modern medical treatment, the term is often used in a more narrow fashion to refer to processes and tests which fall within the contemporary medical field of "general pathology," an area which includes a number of distinct but inter-related medical specialties that diagnose disease, mostly through analysis of tissue, cell, and body fluid samples. Idiomatically, "a pathology" may also refer to the predicted or actual progression of particular diseases, and the affix path is sometimes used to indicate a state of disease in cases of both physical ailment and psychological conditions. A physician practicing pathology is called a pathologist. 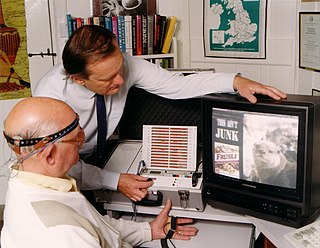 A psychologist studies normal and abnormal mental states, cognitive, emotional, and social processes and behavior by observing, interpreting, and recording how individuals relate to one another and to their environments. To become a psychologist, a person often completes a graduate university degree in psychology, but in most jurisdictions, members of other behavioral professions can also evaluate, diagnose, treat, and study mental processes. 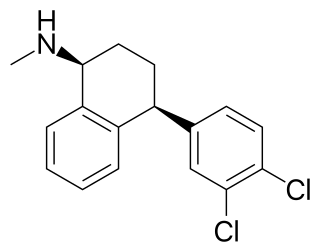 Clinical trials are experiments or observations done in clinical research. Such prospective biomedical or behavioral research studies on human participants are designed to answer specific questions about biomedical or behavioral interventions, including new treatments and known interventions that warrant further study and comparison. Clinical trials generate data on safety and efficacy. They are conducted only after they have received health authority/ethics committee approval in the country where approval of the therapy is sought. These authorities are responsible for vetting the risk/benefit ratio of the trial – their approval does not mean that the therapy is 'safe' or effective, only that the trial may be conducted.

ATC code B02Antihemorrhagics is a therapeutic subgroup of the Anatomical Therapeutic Chemical Classification System, a system of alphanumeric codes developed by the WHO for the classification of drugs and other medical products. Subgroup B02 is part of the anatomical group B Blood and blood forming organs.

Clinical pathology, Laboratory Medicine, Clinical analysis (Spain) or Clinical/Medical Biology, is a medical specialty that is concerned with the diagnosis of disease based on the laboratory analysis of bodily fluids, such as blood, urine, and tissue homogenates or extracts using the tools of chemistry, microbiology, hematology and molecular pathology. This specialty requires a medical residency.

The neonatal Fc receptor (FcRn), also known as the Brambell receptor, is a protein that in humans is encoded by the FCGRT gene.

Fostamatinib, sold under the brand name Tavalisse, is a medication approved by the U.S. Food and Drug Administration since 2018 for the treatment of chronic immune thrombocytopenia (ITP). The drug is administered orally as a disodium hexahydrate salt, and is a prodrug of the active compound tamatinib (R-406), which is an inhibitor of the enzyme spleen tyrosine kinase (Syk), hence it is an syk inhibitor.

The phases of clinical research are the steps in which scientists do experiments with a health intervention in an attempt to find enough evidence for a process which would be useful as a medical treatment. In the case of pharmaceutical study, the phases start with drug design and drug discovery then proceed on to animal testing. If this is successful, they begin the clinical phase of development by testing for safety in a few human subjects and expand to test in many study participants to determine if the treatment is effective.