Throwley is an English village south of Faversham in the Borough of Swale in Kent.The name is recorded in the Doomsday Book as Trevelai, which corresponds with a Brittonic origin, where "Trev" means a settlement or farm house and "Elai" typically relates to a fast moving river or stream (CF. Trelai (showing the loss of terminal "f") in Cardiff). 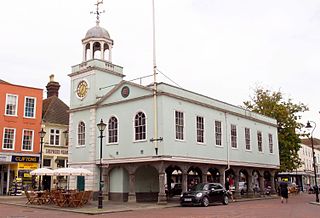 Swale is a local government district with borough status in Kent, England and is bounded by Medway to the west, Canterbury to the east, Ashford to the south and Maidstone to the south west. Its council is based in Sittingbourne. The district is named after the narrow channel called The Swale, that separates the mainland of Kent from the Isle of Sheppey, and which occupies the central part of the district.

At the end of the civil wars of 1139-53, King Stephen's chief lieutenant William of Ypres gave the churches of Throwley and Chilham to the Abbey of Saint Bertin in Saint-Omer, France. [2] Throwley Priory was built as a cell of that Benedictine house. It was dissolved as part of Henry IV's general suppression of alien priories in 1414 [3] and granted to Thomas Beaufort, the half-brother of the king's father. Beaufort gave Throwley to Syon Abbey on 13 July 1424, a gift confirmed by Henry VI in 1443. [4] 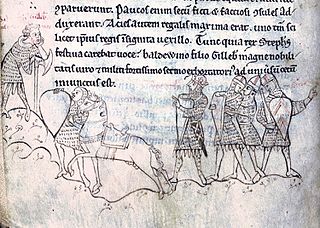 The Anarchy was a civil war in England and Normandy between 1135 and 1153, which resulted in a widespread breakdown in law and order. The conflict was a succession crisis precipitated by the accidental death by drowning of William Adelin, the only legitimate son of Henry I, in the sinking of the White Ship in 1120. Henry's attempts to install his daughter, the Empress Matilda, as his successor were unsuccessful and on Henry's death in 1135, his nephew Stephen of Blois seized the throne with the help of Stephen's brother, Henry of Blois, the Bishop of Winchester. Stephen's early reign was marked by fierce fighting with English barons, rebellious Welsh leaders and Scottish invaders. Following a major rebellion in the south-west of England, Matilda invaded in 1139 with the help of her half-brother Robert of Gloucester.

Stephen, often referred to as Stephen of Blois, was King of England from 22 December 1135 to his death. He was Count of Boulogne from 1125 until 1147 and Duke of Normandy from 1135 until 1144. His reign was marked by the Anarchy, a civil war with his cousin and rival, the Empress Matilda, whose son, Henry II, succeeded Stephen as the first of the Angevin kings of England.

A Royal Flying Corps airfield was established in the Parish during the First World War to provide a landing ground for fighter biplanes defending London, the Thames Estuary and Kent. It was located near Bells Forstal.

The Royal Flying Corps (RFC) was the air arm of the British Army before and during the First World War, until it merged with the Royal Naval Air Service on 1 April 1918 to form the Royal Air Force. During the early part of the war, the RFC supported the British Army by artillery co-operation and photographic reconnaissance. This work gradually led RFC pilots into aerial battles with German pilots and later in the war included the strafing of enemy infantry and emplacements, the bombing of German military airfields and later the strategic bombing of German industrial and transport facilities. 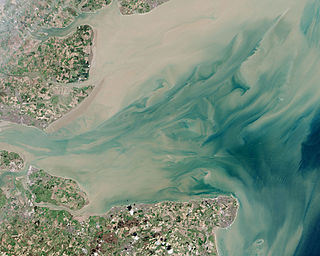 The Thames Estuary is where the River Thames meets the waters of the North Sea, in the south-east of Great Britain.

Throwley lies on top of the Kent North Downs in an Area of Outstanding Natural Beauty. The landscape is mainly arable fields and woodland copses covering just over 5 square miles.

The population of around 130 households is scattered across a number of hamlets the largest of which is Throwley Forstal.

Within the parish is Belmont House and Gardens, an 18th-century house with a fine collection of clocks and beautiful gardens. The estate was owned by successive generations of the Harris family, it is now held in trust.

Belmont is a Georgian house and gardens in Throwley, near Faversham in east Kent. Built between 1769 and 1793, it has been described as "a marvellous example of Georgian architecture that has remained completely unspoilt". The house is famous for the most extensive private collection of clocks in England. 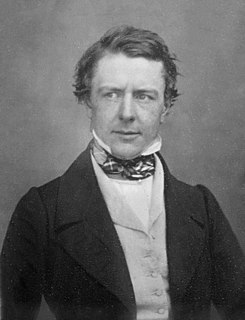 Baron Harris, of Seringapatam and Mysore in the East Indies and of Belmont in the County of Kent, is a title in the Peerage of the United Kingdom.

The Parish church is St Michaels and All Angels which is built of flint, inside are monuments to the Harris and Sondes families. The church tower has a ring of eight bells.

Earl Sondes, of Lees Court in the County of Kent, was a title in the Peerage of the United Kingdom. It was created in 1880 for the former Conservative Member of Parliament for East Kent, George Milles, 5th Baron Sondes. He was made Viscount Throwley, of the County of Kent, at the same time, which title was used as a courtesy title by the eldest son and heir apparent of the Earl. The titles became extinct on the death of his great-grandson, the fifth Earl, in 1996.

Monks Kirby is a village and civil parish in north-eastern Warwickshire, England. The population of the parish is 445.

Burwell is a small village and Civil parish in the East Lindsey district of Lincolnshire, England. It is situated on the A16 road, and north from Spilsby. The village covers approximately 2200 acres (9 km²). 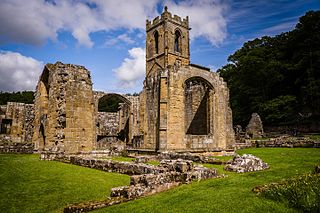 Aston Rowant is a village, civil parish and former manor situated about 4 1⁄2 miles (7 km) south of Thame in South Oxfordshire, England. The parish includes the villages of Aston Rowant and Kingston Blount, and adjoins Buckinghamshire to the southeast. The 2011 Census recorded the parish's population as 793. 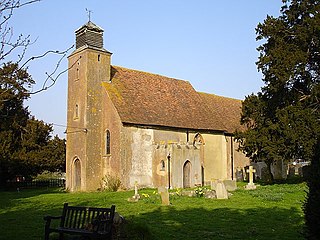 Badlesmere is a village and civil parish in the Swale district of Kent, England, and about five miles south of Faversham. 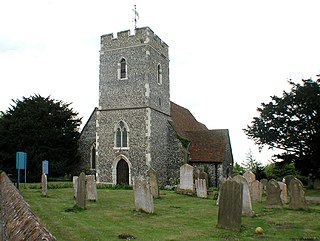 Bobbing is a village and civil parish in the Swale district of Kent, England, about a mile north-west of Sittingbourne, and forming part of its urban area. The hamlet of Howt Green and village of Keycol are encompassed within the parish. According to the 2011 census Bobbing parish had a population of 1,969.

Folkestone Priory was a pre-Reformation Benedictine monastery at Folkestone in the English county of Kent. The priory church survives as the present parish church. It was the successor to Folkestone Abbey, an Anglo-Saxon nunnery on a different site.

Wroxton is a village and civil parish in the north of Oxfordshire about 3 miles (5 km) west of Banbury. The 2011 Census recorded the parish's population as 546.

Ospringe is a village and area of Faversham in the English county of Kent. It is also the name of a civil parish, which since 1935 has not included the village of Ospringe.

Minster Lovell is a village and civil parish on the River Windrush about 2 1⁄2 miles (4 km) west of Witney in Oxfordshire. The 2011 Census recorded the parish's population as 1,409.

Stalisfield Green is a village in the borough of Swale in Kent, England, located on a secondary road about 1½ miles (2.4 km) north of Charing and 5 miles south west of Faversham.

Painters Forstal is a village in the Swale district of the English county of Kent. It is 2 miles (3.2 km) south-west of the town of Faversham and is part of the civil parish of Ospringe. It lies just south of the M2 motorway, and has developed almost completely since the 1950s.

Royal Air Force Throwley or more simply RAF Throwley is a former Royal Air Force (RAF) installation located 1.2 miles (1.9 km) south of Throwley, Kent and 7 miles (11 km) north of Ashford, Kent. The installation was also used by the Royal Flying Corps was previously called Throwley Aerodrome before being taken over the RAF during April 1918 and renamed to its current name.

Little Tew is a village and civil parish about 4 1⁄2 miles (7 km) northeast of Chipping Norton and 8 1⁄2 miles (14 km) southwest of Banbury in Oxfordshire. The parish is bounded to the northwest by the River Swere and a road between Little Tew and Hook Norton, to the north by a tributary of the River Cherwell and to the south by an ancient drovers' road called Green Lane. The remaining parts of the parish bounds are field boundaries. The 2011 Census recorded the parish's population as 253.

Chacombe is an English village and civil parish in South Northamptonshire, about 3 miles (5 km) north-east of the Oxfordshire town of Banbury. It has sometimes been spelt Chalcombe. The parish is bounded to the west by the River Cherwell, to the north by a tributary of it, and to the south-east by the Banbury–Syresham road. The 2011 Census recorded the parish population as 659.

Throwley Priory was an English priory south of Faversham in Kent. 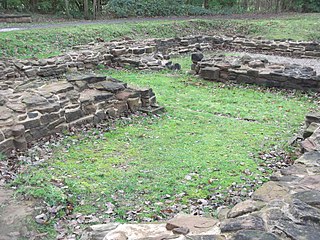