Thurl Lee Bailey (born April 7, 1961) is an American former professional basketball player whose National Basketball Association (NBA) career spanned from 1983 to 1999 with the Utah Jazz and the Minnesota Timberwolves. Bailey has been a broadcast analyst for the Utah Jazz and the University of Utah— in addition to work as an inspirational speaker, singer, songwriter, and film actor. Bailey garnered the nickname "Big T" during his basketball career.

Bailey attended North Carolina State University and was a leader in the Wolfpack's miracle run to the 1983 NCAA Championship. That year, under head coach Jim Valvano, he led the Wolfpack in both scoring and rebounding. The Utah Jazz selected him as the 7th pick of the 1983 NBA draft. Jazz management reported that he was selected for the quality of his character, as well as the quality of his game. This was the beginning of 16 years of playing professional basketball, with 12 of those years in the NBA. Bailey’s career-high points game came on March 14, 1988, when he scored 41 points and grabbed 8 rebounds in a 116-115 win over the Denver Nuggets. [1]

Bailey was a starter with the Jazz for most of his first two seasons, but with the drafting of Karl Malone, Jazz coach Frank Layden made Bailey one of the first options off the bench. As a result, Bailey had his two finest NBA seasons in 1987–88 (19.6 ppg, played in all 82 games and started 10 times) and 1988–89 (19.5 ppg, 82 games, 3 starts). Both seasons saw him finish second in Sixth Man of the Year voting. During Bailey’s Utah tenure, he played in 665 games, missing only 4 games he was eligible to play in. [2]

Throughout his career, Bailey has also been involved in community service. He has directed basketball camps for youth since 1984 in which he teaches young people lessons about life and basketball. Bailey's basketball camps often focus on students with serious illnesses or disadvantaged backgrounds. Bailey's record of service has resulted in numerous awards for leadership and contributions to the community. Included in his awards are: the NBA's prestigious Kennedy Community Award, the Utah Association for Gifted Children's Community Service Award, Sigma Gamma Chi fraternity's Exemplary Manhood Award, the Great Salt Lake Council of the Boy Scouts of America's American Champion Award and the Italian League's 1998 All-Star Games Most Valuable Player.[ citation needed ]

Career after the NBA

Bailey is a public speaker, a broadcast analyst for the Utah Jazz and the University of Utah, an actor, and a singer/songwriter. [4] Bailey's albums include Faith In Your Heart (1998), The Gift of Christmas (2001), and I'm Not the Same (2002).

Bailey is chairman of Big T Productions, Fertile Earth (which has a patent pending on a fertilizer that works through irrigation sprinkler systems), and FourLeaf Films. [5]

He works with various charities, including Make-A-Wish, D.A.R.E., and the Happy Factory. [5]

Bailey gave the opening prayer at the 2008 Republican National Convention. [7] [8]

Bailey was born in Washington, D.C., and grew up in a violent household in a high-crime neighborhood of Capitol Heights, Maryland bordering D.C. [5]

Bailey is the father of six children. He has a daughter, Chonell, with his high school sweetheart and two sons, Thurl, Jr., and TeVaun from his first marriage. Bailey and his wife, Sindi (née Southwick), live in Salt Lake City with their three children BreElle, Brendan, and Bryson. His son Brendan played basketball at Marquette.

Bailey was raised Baptist. [9] While playing basketball in Italy, Bailey decided to join The Church of Jesus Christ of Latter-day Saints. He was baptized by his father-in-law on December 31, 1995. [7]

The Minnesota Timberwolves are an American professional basketball team based in Minneapolis. The Timberwolves compete in the National Basketball Association (NBA) as a member of the league's Western Conference Northwest Division. Founded in 1989, the team is owned by Glen Taylor who also owns the WNBA's Minnesota Lynx. The Timberwolves play their home games at Target Center, their home since 1990.

The Utah Jazz are an American professional basketball team based in Salt Lake City. The Jazz compete in the National Basketball Association (NBA) as a member of the league's Western Conference, Northwest Division. Since the 1991–92 season, the team has played its home games at Vivint Arena. The franchise began play as an expansion team in the 1974–75 season as the New Orleans Jazz. The Jazz relocated to Salt Lake City prior to the 1979–80 season. 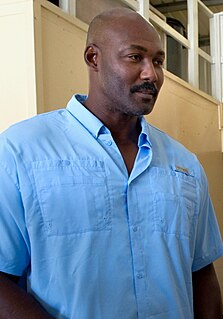 Karl Anthony Malone is an American former professional basketball player in the National Basketball Association (NBA). Nicknamed "the Mailman", he is considered one of the greatest power forwards in NBA history. Malone spent his first 18 seasons (1985–2003) in the NBA with the Utah Jazz and formed a formidable duo with his teammate John Stockton. He was a two-time NBA Most Valuable Player, a 14-time NBA All-Star, and an 11-time member of the All-NBA first team. His 36,928 career points scored rank third all-time in NBA history behind Kareem Abdul-Jabbar and LeBron James, and he holds the records for most free throws attempted and made, in addition to being tied for the second-most first-team All-NBA selections with Kobe Bryant and behind LeBron James. 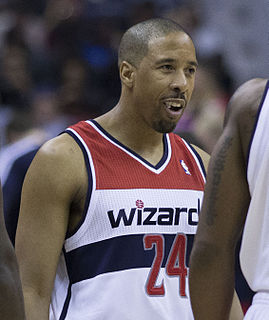 Andre Lloyd Miller is an American former professional basketball player and the current head coach for the Grand Rapids Gold. Miller has played professional basketball for the Cleveland Cavaliers, Los Angeles Clippers, Philadelphia 76ers, Portland Trail Blazers, Denver Nuggets, Washington Wizards, Sacramento Kings, Minnesota Timberwolves and San Antonio Spurs. Currently, he ranks eleventh all-time in NBA career assists and only missed three games to injury in his 17-year career. He is the only player in NBA history to have at least 16,000 career points, 8,000 assists and 1,500 steals without making an NBA All-Star Game. 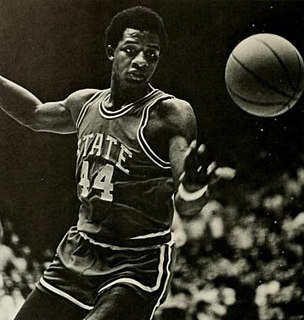 David O'Neil Thompson is an American former professional basketball player. He played with the Denver Nuggets of both the American Basketball Association (ABA) and National Basketball Association (NBA), as well as the Seattle SuperSonics of the NBA. He was previously a star in college for North Carolina State, leading the Wolfpack to its first NCAA championship in 1974. Thompson is one of the six players to score 70 or more points in an NBA game. He was inducted into the Naismith Basketball Hall of Fame in 1996. 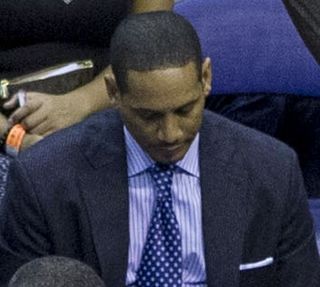 Howard Jonathan Eisley is an American former professional basketball player and current coach. Born in Detroit, Eisley played college basketball at Boston College and was drafted in 1994 by the Minnesota Timberwolves. Eisley spent twelve seasons in the National Basketball Association (NBA): six with the Utah Jazz and the other six with seven other teams.

Sidney Rochell Lowe is an American former basketball player and coach. He is currently an assistant coach for the Cleveland Cavaliers of the National Basketball Association (NBA). Lowe played college basketball and served as the head coach at North Carolina State University. 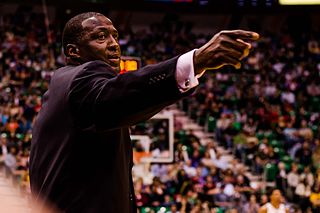 Tyrone Kennedy Corbin is an American former basketball player. He was first appointed the assistant coach of the Phoenix Suns, then was named the Utah Jazz’s head coach, on February 10, 2011 following the resignation of longtime coach Jerry Sloan. He was also the brief interim head coach of the Sacramento Kings in the 2014–15 season before being replaced by George Karl. Prior to that, Corbin played 16 seasons in the NBA. 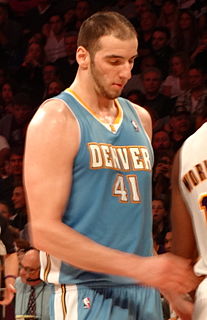 Konstantine Demetrios "Kosta" Koufos is a Greek-American professional basketball player who plays for the London Lions of the British Basketball League (BBL). He played one season at Ohio State before being selected by the Utah Jazz with the 23rd overall pick in the 2008 NBA draft.

The 1993–94 NBA season was the Jazz's 20th season in the National Basketball Association, and 15th season in Salt Lake City, Utah. During the off-season, the Jazz signed free agent All-Star forward Tom Chambers, and acquired Felton Spencer from the Minnesota Timberwolves. The Jazz played competitive basketball with a 22–8 start, but then lost five of their next six games, and held a 31–18 record at the All-Star break. At midseason, the team traded Jeff Malone to the Philadelphia 76ers for Jeff Hornacek. With the addition of Hornacek, the Jazz posted a ten-game winning streak between February and March, and won nine of their final eleven games finishing third in the Midwest Division with a 53–29 record. They made their eleventh consecutive trip to the playoffs.

The 1991–92 NBA season was the Timberwolves' 3rd season in the National Basketball Association. Under new head coach Jimmy Rodgers, the Timberwolves began their season amidst a blizzard when a one-day record 24 inches or 0.61 metres of snow fell as they lost to the Utah Jazz 112–97 on November 1. Early into the season, the team traded Tyrone Corbin to the Jazz for Thurl Bailey, as they continued to get worse with an awful 8–38 start around the All-Star Break. Their struggles continued as they went on a 16-game losing streak in March, finishing last place in the Midwest Division with a 15–67 record (.183), which remains the equal lowest winning percentage in the franchise’s history, alongside the 2009–10 Timberwolves.

The 1991–92 NBA season was the Jazz's 18th season in the National Basketball Association, and 13th season in Salt Lake City, Utah. It was also their first season playing at the Delta Center. The Jazz got off to a 7–6 start as the team traded Thurl Bailey to the Minnesota Timberwolves for Tyrone Corbin near the end of November. In December, during a home game against the Detroit Pistons, Karl Malone committed a flagrant foul on Isiah Thomas, in which Malone hit Thomas's forehead with his elbow, and Thomas had to receive 40 stitches; Malone was suspended for one game. The Jazz would win their final seven games finishing first in the Midwest Division with a 55–27 record. They made their ninth consecutive trip to the playoffs.

The 1989–90 NBA season was the Jazz's 16th season in the National Basketball Association, and 11th season in Salt Lake City, Utah. The Jazz got off to a fast start early into the season by winning seven of their first eight games. They continued to play solid basketball winning 11 of their 14 games in January, including a nine-game winning streak. The Jazz finished with an impressive 55–27 record, second in the Midwest Division. They made their seventh consecutive trip to the playoffs.

Jakob Pöltl is an Austrian professional basketball player for the San Antonio Spurs of the National Basketball Association (NBA). He played college basketball for the Utah Utes.

Juan Alberto "Juancho" Hernangómez Geuer is a Spanish professional basketball player for the Toronto Raptors of the National Basketball Association (NBA). He previously played for Estudiantes of the Liga ACB, and has represented the senior Spain national team. He was selected by the Denver Nuggets with the 15th pick in the 2016 NBA Draft and played for three and half seasons with the team before being traded to the Minnesota Timberwolves. After spending one and a half seasons with the team in his seventh season he had short stints with the Celtics, Spurs and Utah Jazz. He co-starred in the Netflix basketball film Hustle in 2022 alongside Adam Sandler. 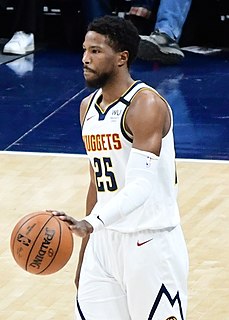 Malik JonMikal Beasley is an American professional basketball player and member of the Utah Jazz. He attended Saint Francis School in Alpharetta, Georgia, and played one season of college basketball for the Florida State Seminoles. Beasley was drafted by the Denver Nuggets with the 19th overall pick in the 2016 NBA draft. After three and a half seasons with the Nuggets he was traded to the Minnesota Timberwolves. In mid 2021, Beasley served 78 days of a 120-day sentence in jail related to a firearm-brandishing incident. 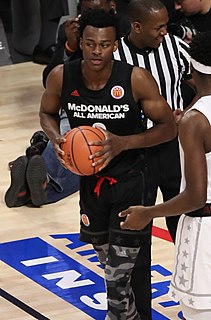 Jarred Vanderbilt is an American professional basketball player for the Utah Jazz of the National Basketball Association (NBA). He played college basketball for the Kentucky Wildcats. In January 2017 Vanderbilt was selected as a McDonald's All-American. Vanderbilt is known for his great vertical jumping ability and his hustle.

Wikimedia Commons has media related to Thurl Bailey .
This page is based on this Wikipedia article
Text is available under the CC BY-SA 4.0 license; additional terms may apply.
Images, videos and audio are available under their respective licenses.