In most instances, the usage is an allusion to the Shakespearean play Hamlet (I, ii, 146). In this work, the title character is chastised by his uncle (and new stepfather), Claudius, for grieving his father so much, calling it unmanly. In his resultant soliloquy, Hamlet denounces his mother's swift remarriage with the statement, "Frailty, thy name is woman." [1] He thus describes all of womankind as frail and weak in character. [2] The phrase is recognized as one of the "memorable expressions" from the play to become "proverbial". [3]

In the book Idiom Structure in English by Adam Makkai, the author asserts that the phrase is included among English idioms that are expressed in a "standard format" and whose usage "signals to the hearer that he is using an authority in underscoring his own opinion." [4] Researchers Andrew Littlejohn and Sandhya Rao Mehta acknowledged that the famous quote rendered not only a discursive use, but a constructional one as well, [5] noting that "the structure itself can be used a salient, but neutral equation formula...'noun thy name is noun.'" [5]

Amos Bronson Alcott famously said of William Ellery Channing in 1871, "Whim, thy name is Channing." He was referring to Channing's Transcendentalist poetry style. [7] 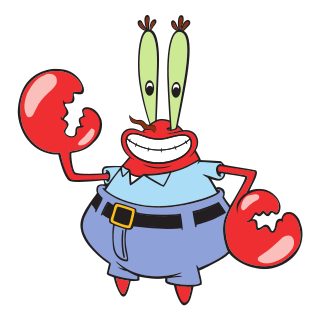 Eugene Harold Krabs, better known as simply Mr. Krabs, is a fictional character in the American animated television series SpongeBob SquarePants. He is voiced by actor Clancy Brown and first appeared in the series' pilot episode "Help Wanted" on May 1, 1999. The character was created and designed by marine biologist and animator Stephen Hillenburg.

James Bartholomew Olsen is a fictional character appearing in American comic books published by DC Comics. Olsen is most often portrayed as a young photojournalist working for the Daily Planet. He is close friends with Lois Lane and Clark Kent, and has a good working relationship with his boss Perry White. Olsen looks up to his coworkers as role models and parent figures. From 1954-1982, Olsen appeared in 222 issues of the comic series Superman's Pal Jimmy Olsen and Superman Family, in addition to the main Superman titles.

Xenosaga is a role-playing video game series developed by Monolith Soft and primarily published by Namco. Forming part of the wider Xeno metaseries, Xenosaga is set in a science fiction universe and follows a group of characters as they face both a hostile alien race called the Gnosis and human factions fighting for control of the Zohar, an artifact connected to a god-like energy called U-DO. Gameplay across the series is similar, with the characters being guided through a linear narrative and fighting enemies using a turn-based combat system. The party fights both on foot and in a variety of mechs.

Superwoman is the name of several fictional characters from DC Comics. Most of them are, like Supergirl, women with powers similar to those of Superman. Detective Comics, Inc. trademarked the name to prevent competitors from using it. As was the practice, a publication produced solely for legal purposes was created with the title of Superwoman. The cover was a reproduction of More Fun Comics #73 with the interior being a reprint of the third issue of Action Comics. The first true appearance of Superwoman was in Action Comics #60.

"Lisa's First Word" is the tenth episode of the fourth season of the American animated television series The Simpsons. It was first broadcast on the Fox network in the United States on December 3, 1992. In the episode, as the Simpson family gathers around Maggie and tries to encourage her to say her first word, Marge reminisces and tells the story of Lisa's first word. Elizabeth Taylor appeared for the voicing of Maggie's first word.

Lucy Lane is a fictional supporting character in DC Comics. She is the younger sister of Lois Lane, and one of several characters who have assumed the Superwoman identity. 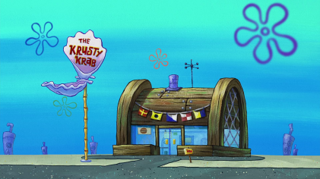 The Krusty Krab is a fictional fast food restaurant in the American animated television series SpongeBob SquarePants. It is famous for its signature burger, the Krabby Patty, the formula to which is a closely guarded trade secret.

"I'm Spelling as Fast as I Can" is the twelfth episode of the fourteenth season of the American animated television series The Simpsons. It originally aired on the Fox network in the United States on February 16, 2003, and was seen by around 22 million people during this broadcast. The episode is referred to as the 301st in the opening theme as it originally aired the same day as the episode "Barting Over", which was promoted as the 300th episode. 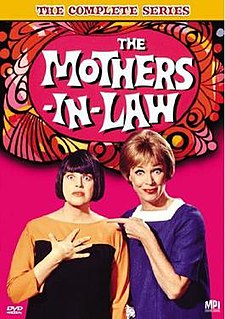 The Mothers-in-Law is an American situation comedy featuring Eve Arden and Kaye Ballard as two women who were friends and next-door neighbors until their children's elopement made them in-laws. The show aired on NBC television from September 1967 to April 1969. Executive produced by Desi Arnaz, the series was created by Bob Carroll, Jr., and Madelyn Davis.

Illegitimi non carborundum is a mock-Latin aphorism, often translated as "Don't let the bastards grind you down". The phrase itself has no meaning in Latin and can only be mock-translated.

Xenosaga Episode I: Der Wille zur Macht is a role-playing video game developed by Monolith Soft and published by Namco for the PlayStation 2; the game was released in 2002 in Japan and 2003 in North America. It is the first entry in the Xenosaga trilogy and forms part of the wider Xeno metaseries. Gameplay features exploration of environments through a linear narrative, while battles use turn-based combat with the player characters fighting both on foot and piloting large mecha dubbed A.G.W.S.; combat in turn features a system of button combinations for attack types, and multiple leveling systems. 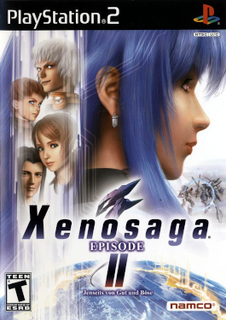 Xenosaga Episode II: Jenseits von Gut und Böse is a role-playing video game developed by Monolith Soft for the PlayStation 2. It was published in Japan (2004) and North America (2005) by Namco, and in Europe by Sony Computer Entertainment Europe (2005). It is the second entry in the Xenosaga trilogy, and forms part of the wider Xeno metaseries. Continuing directly from the events of Xenosaga Episode I, Xenosaga Episode II sees protagonists Shion Uzuki and Jr. continuing to combat the plots of the U-TIC Organization and the insane Albedo Piazzolla. Gameplay is carried over from the first game, featuring exploration of environments through a linear narrative, while battles follow a turn-based system featuring a system of button combinations, multiple leveling systems, and combat featuring both the characters on foot and piloting large mecha called "E.S.". 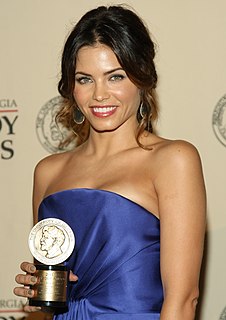 Jenna Lee Dewan is an American actress and dancer. She started her career as a backup dancer for Janet Jackson, and later worked with artists including Christina Aguilera, Pink, and Missy Elliott. She is known for her role as Nora Clark in the 2006 film Step Up. She has also starred on the short-lived NBC series The Playboy Club and had a recurring role on the FX series American Horror Story: Asylum. She portrayed Freya Beauchamp on the Lifetime series Witches of East End, Lucy Lane in The CW series Supergirl and its spin-off, Superman & Lois and Joanna in Soundtrack on Netflix. Dewan has hosted the reality television shows World of Dance and Flirty Dancing and served as a judge on Come Dance with Me. She currently stars as Bailey on ABC's The Rookie. She also had a recurring role on the FOX medical drama The Resident. 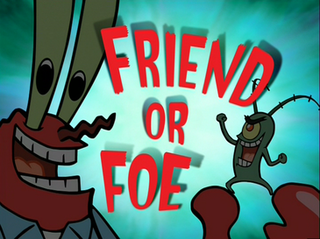 "Friend or Foe" is the first episode of the fifth season of the American animated television series SpongeBob SquarePants, and the 81st episode overall. It was written by Casey Alexander, Zeus Cervas, Mike Mitchell, Steven Banks, and Tim Hill, and the animation was directed by supervising director Alan Smart and Tom Yasumi; Alexander, Cervas and Mitchell also functioned as storyboard directors. The episode originally aired on Nickelodeon in the United States on April 13, 2007.

Supergirl is the name of seven comic book series published by DC Comics, featuring various characters of the same name. The majority of the titles feature Superman's cousin Kara Zor-El. "Pest of the West" is the 16th episode of the fifth season and the 96th overall episode of the American animated television series SpongeBob SquarePants. In this episode, SpongeBob finds that he is a distant relative of SpongeBuck SquarePants, a sheriff from Bikini Bottom's past town who helped save the citizens from the quickest whip draw in town, the evil Dead Eye Plankton. It was written by Luke Brookshier, Tom King, Steven Banks and Richard Pursel, with Andrew Overtoom and Tom Yasumi serving as animation directors. Brookshier and King also functioned as storyboard directors. 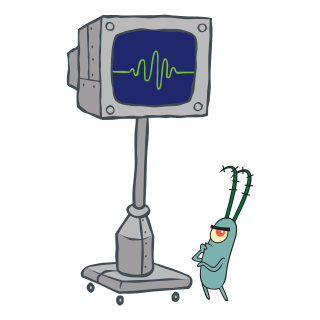 Sheldon J. Plankton and Karen Plankton are fictional characters and the main antagonists in the Nickelodeon animated television series SpongeBob SquarePants. They are respectively voiced by Mr. Lawrence and Jill Talley. Their first appearance was in the episode "Plankton!" that premiered on July 31, 1999. They were created and designed by marine biologist and animator Stephen Hillenburg, the creator of the series. Hillenburg named Karen after his wife, Karen Umland. 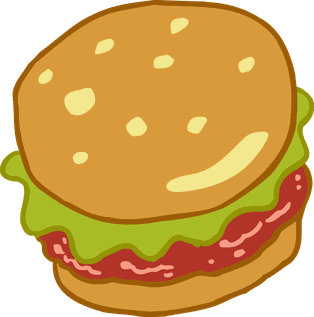 A Krabby Patty is a veggie burger sold by the fictional restaurant the Krusty Krab in the animated television series SpongeBob SquarePants. The series' creator, Stephen Hillenburg, expressly stated that the patties do not contain any meat. Created by the restaurant's founder Eugene Krabs and his archenemy Plankton, it is what the main character SpongeBob cooks throughout his job as a fry cook, as well as the restaurant's trademark food and most famous burger in Bikini Bottom. A prominent storyline throughout the series is Krabs' nemesis Plankton trying to steal the Krabby Patty secret formula. This running gag was given a backstory in the special "Friend or Foe", where it is revealed that Krabs and Plankton created the Krabby Patty to compete with the health-violating restaurant Stinky Burgers.