The ticking doradito (Pseudocolopteryx citreola) is a species of bird in the family Tyrannidae. It is found in swamps and riparian habitats in central Chile and western Argentina. [2]

Buteo is a genus of medium to fairly large, wide-ranging raptors with a robust body and broad wings. In the Old World, members of this genus are called "buzzards", but "hawk" is used in North America. As both terms are ambiguous, buteo is sometimes used instead, for example, by the Peregrine Fund.

A booby is a seabird in the genus Sula, part of the Sulidae family. Boobies are closely related to the gannets (Morus), which were formerly included in Sula. 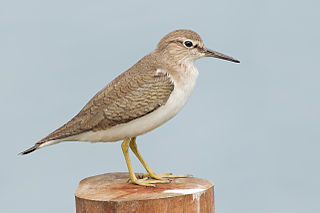 The common sandpiper is a small Palearctic wader. This bird and its American sister species, the spotted sandpiper, make up the genus Actitis. They are parapatric and replace each other geographically; stray birds of either species may settle down with breeders of the other and hybridize. Hybridization has also been reported between the common sandpiper and the green sandpiper, a basal species of the closely related shank genus Tringa. 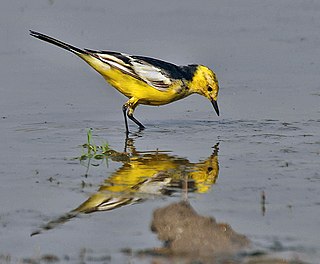 The citrine wagtail (Motacilla citreola) is a small songbird in the family Motacillidae.

Accipiter is a genus of birds of prey in the family Accipitridae. With 51 recognized species it is the most diverse genus in its family. Most species are called goshawks or sparrowhawks, although almost all New World species are simply known as hawks. They can be anatomically distinguished from their relatives by the lack of a procoracoid foramen. Two small and aberrant species usually placed here do possess a large procoracoid foramen and are also distinct as regards DNA sequence. They may warrant separation in the old genus Hieraspiza.

The whistling ducks or tree ducks are a subfamily, Dendrocygninae, of the duck, goose and swan family of birds, Anatidae. They are not true ducks. In other taxonomic schemes, they are considered a separate family, Dendrocygnidae. Some taxonomists list only one genus, Dendrocygna, which contains eight living species, and one undescribed extinct species from Aitutaki of the Cook Islands, but other taxonomists also list the white-backed duck under the subfamily.

Butastur is a genus of birds of prey in the family Accipitridae.

The spectacled weaver is a species of bird in the family Ploceidae. It is found widely in woodland, forest edge and gardens of central, eastern and south-eastern Africa, but is absent from the most arid regions and dense, primary rainforest. This common species breeds in solitary pairs, and both sexes are bright yellow, have an olive-yellow back, black "spectacles" and pale eyes. The male has a black throat.

Holub's golden weaver, also called the African golden weaver, is a species of bird in the family Ploceidae. It is found from Gabon to Uganda and Kenya, south to northern Namibia, northern Botswana and eastern South Africa.

The Pander's ground jay, grey ground jay or Turkestan ground-jay is a species of bird in the crow and jay family, Corvidae. It is found in central Asia, particularly Kazakhstan, Turkmenistan, and Uzbekistan. It is closely related to the Persian ground-jay of Iran. Its natural habitat is sandy desert with low shrub cover. It also forages around human settlements and roads.

The subtropical doradito is a species of bird in the family Tyrannidae. It is found in Argentina, Bolivia, Colombia, Ecuador, Paraguay, and Peru. Its natural habitats are subtropical or tropical moist shrubland and swamps.

Pseudocolopteryx is a genus of bird in the family Tyrannidae. They are found in marshy habitats in South America. All have yellow underparts.

The warbling doradito is a species of bird in the family Tyrannidae. It is found in swamps and riparian habitats in central and northern Argentina, Paraguay, Uruguay and southern Brazil. The population breeding in Chile and western Argentina has usually also been included in the warbling doradito. It is visually extremely similar, but vocally distinctive and has recently been recognized as a separate species, the ticking doradito.

The crested doradito is a species of bird in the family Tyrannidae. 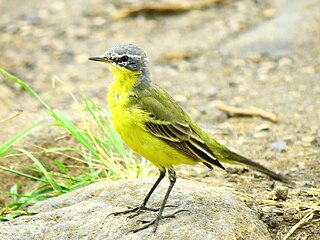