Tie Break Tens [1] is a tennis format in which only tie-break matches are played. There are no games or sets, only tie-break matches and the winner is the first player to reach 10 points and lead by a margin of two. Most other traditional rules of tennis are the same. The winner-take-all prize money is US$250,000 for each tournament. It is a short-format version of tennis, similar to other alternative forms of traditional sports, such as T20 Cricket and rugby sevens. [2]

The inaugural Tie Break Tens tournament took place at the  Royal Albert Hall  on 5 December 2015. It was won by Kyle Edmund who beat Andy Murray in the finals. [3]

Since then, tournaments have been played in Vienna, Madrid, Melbourne and New York, with the world's current top tennis professionals competing for the grand prize.

Tie Break Tens is played using traditional tie-break rules. Players win by reaching 10 points (provided that they have a clear margin of two points). Rock-paper-scissors determines who serves first, and from which end of the court they play. The player who wins the toss, serves first. The other player then serves twice, and with the rest of the match continues with the players alternating serves every two points. Players change ends after every six points. Players are allowed an unlimited number of line-call challenges using review technology during each match, until an incorrect challenge is made. After this, no more challenges are allowed until the next match.

A knock-out format is used, with quarterfinals, semifinals and final.

The inaugural Tie Break Tens [4] tournament took place on 5 December 2015 at the Royal Albert Hall in London. A round-robin format was used, with six players divided into two groups of three. It was staged in partnership with Champions Tennis and promoted by   IMG   with a winner-take-all prize of $250,000. Andy Murray, John McEnroe, Tim Henman, David Ferrer, Kyle Edmund and Champions Tennis qualifier   Xavier Malisse   participated in the competition. In the final, Edmund defeated Andy Murray 10-7 and took away the $250,000 prize, more than doubling his earnings for 2015.

Tie Break Tens Tens took place at the Caja Mágica in Madrid on 4 May 2017. [12] It featured both men's and women's tournaments for the first time. Grigor Dimitrov won the men's title with Simona Halep taking the women's title. [13]

The first Tie Break Tens competition of 2018 was played on 10 January at the Margaret Court Arena in Melbourne, Australia. [16] It featured an 8-player men's singles tournament.

The women's only tournament was played on 5 March 2018 in New York City at Madison Square Garden. This was the first time the competition had been staged in the United States.

It marked the return of Serena Williams playing her first singles competition since giving birth to her daughter. [21]

The men’s singles tournament was played on 5 March 2019 at Indian Wells Tennis Garden. This was their first competition at Indian Wells.[ citation needed ] 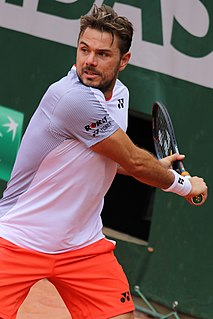 Stanislas Wawrinka is a Swiss professional tennis player. He reached a career-high Association of Tennis Professionals (ATP) world No. 3 singles ranking for the first time on 27 January 2014. His career highlights include three Grand Slam titles including the 2014 Australian Open, 2015 French Open and 2016 US Open, where he defeated the No. 1 player in the final on all three occasions, reaching the final of the 2017 French Open, winning an ATP Tour Masters 1000 title at the 2014 Monte-Carlo Masters, and reaching three other finals at 2008 Rome, 2013 Madrid and 2017 Indian Wells. As a competitor for Switzerland, Wawrinka won gold in doubles at the 2008 Beijing Olympics with teammate Roger Federer, and was also pivotal in the Swiss team's victory at the 2014 Davis Cup.

Grigor Dimitrov is a Bulgarian professional tennis player. His career-high ATP singles ranking is world No. 3, which he achieved in November 2017 after winning the ATP Finals. 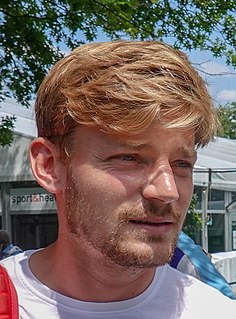 David Goffin is a Belgian professional tennis player whose career high ranking is world No. 7 by the Association of Tennis Professionals (ATP). He is currently the highest ranked Belgian male and the first to reach the ATP top 10. Goffin has won five ATP titles, and has reached nine other ATP finals, most notably at the 2017 ATP World Tour Finals. 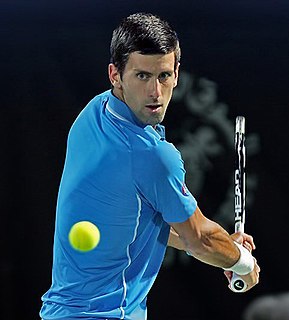 The ATP Masters tournaments is a series of nine tennis tournaments featuring the top-ranked players on the ATP Tour. The series is the most prestigious in men's tennis after the four Grand Slams. The series' events are held annually in Europe, North America and Asia since the debut of ATP Tour in 1990. 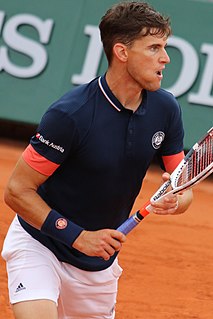 Dominic Thiem is an Austrian professional tennis player. He has been ranked as high as world No. 3 in singles by the Association of Tennis Professionals, which he first achieved in March 2020. He is the second-highest ranked Austrian player in history, behind former world No. 1 Thomas Muster. He has won 17 ATP Tour singles titles, including one Grand Slam title at the 2020 US Open where he came back from two sets down to defeat Alexander Zverev in the final. With the win, Thiem became the first male player born in the 1990s to claim a Grand Slam singles title, as well as the first Austrian to win a US Open singles title. He had previously reached three other Grand Slam finals, losing at the 2018 and 2019 French Open to Rafael Nadal, and at the 2020 Australian Open to Novak Djokovic. Thiem was also the runner-up of the 2019 and 2020 ATP Finals, where he lost to Stefanos Tsitsipas and Daniil Medvedev respectively. 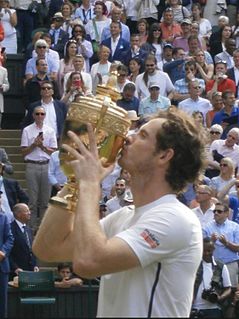 Andy Murray's 2016 tennis season began at the Australian Open. The 2016 season was Murray's greatest season, as he finished the season as the year-end world No. 1 player and clinched the year-end prize money title. Andy and Jamie Murray, also became the first brothers to finish as year-end No. 1 ranked players in singles and doubles team, respectively. He won an ATP-best and career-high nine Tour titles from 13 finals, including his second Wimbledon crown and second successive Olympic gold medal in singles, thus becoming the first person, man or woman, to defend the Olympic singles title. In the 2016 season, Murray became the first male player to win singles titles at a Grand Slam, the Olympics, a Masters 1000 event, and the ATP Finals in the same calendar year.

Stan Wawrinka defeated defending champion Novak Djokovic, 6–7(1–7), 6–4, 7–5, 6–3 to capture the Men's Singles tennis title at the 2016 US Open. This was the first time the men's singles champion at the US Open won the title after being a match point down since Djokovic in 2011, with Wawrinka having saved a match point against Dan Evans in the 3rd round. As he had done in his 2 previous grand slam titles, Wawrinka again defeated the world No. 1 in the final. Djokovic also became the third man in the Open Era to lose five Grand Slam finals at one event.

The 2017 ATP Finals (also known as the 2017 Nitto ATP Finals for sponsorship reasons) was a men's tennis tournament played at the O2 Arena in London, United Kingdom, from 12 to 19 November 2017. It was the season-ending event for the highest-ranked singles players and doubles teams on the 2017 ATP World Tour.

Rafael Nadal won his 10th French Open title and 15th Grand Slam singles title, defeating Stan Wawrinka in the final, 6–2, 6–3, 6–1 to win the Men's Singles tennis title at the 2017 French Open. Nadal is the only male player ever to win 10 singles titles at the same Grand Slam event. Nadal lost only 35 games in the tournament, his personal best, and the second-best in the tournament's history after Björn Borg in 1978. Nadal won this event without losing a set for the third time, thereby tying with Borg for this Grand Slam record.

Novak Djokovic was the defending champion, but lost in the semifinals to Rafael Nadal.

Roger Federer won the title, winning a record eighth Wimbledon Gentlemen's Singles tennis title and 19th Grand Slam men's singles title, defeating Marin Čilić in the final, 6–3, 6–1, 6–4. With the win, Federer surpassed Pete Sampras and William Renshaw, who had each won it seven times. Federer also became only the second man in the Open era, after Björn Borg in 1976, to win Wimbledon without losing a set. This was Federer's 70th appearance at a Grand Slam, tying the record for male players and a record-breaking 11th men's singles final at the same Grand Slam tournament. In addition, by virtue of his third-round win over Mischa Zverev, Federer won his 317th Grand Slam singles match, surpassing Serena Williams' record of 316 match wins and giving him the all-time record for the most Grand Slam singles match wins by any player, male or female. Also, with his first-round win, Federer surpassed Jimmy Connors' record for most match wins at Wimbledon. In the same match, he hit his 10000th ace, becoming only the third man to do so. The tournament marked the fifth time that Nadal and Federer won the French Open and Wimbledon respectively in the same year.

Andy Murray was the defending champion, but did not qualify for the event this year due to injury. This was the first time since 2007 that Murray failed to qualify for the ATP finals.

Novak Djokovic won an all-time record seventh Australian Open title, defeating Rafael Nadal in the final, 6–3, 6–2, 6–3 to win the Men's Singles tennis title at the 2019 Australian Open. The match lasted two hours and four minutes. This was Djokovic's 15th Grand Slam title, surpassing Pete Sampras for third place on the all-time list, behind Federer and Nadal. He retained the ATP no. 1 singles ranking by reaching the fourth round. Nadal was also in contention for the top ranking at the start of the tournament. Nadal attempted to become the first male player in the Open Era to achieve a double career Grand Slam.

Three-time defending champion Rafael Nadal defeated Novak Djokovic in the final, 6–0, 6–2, 7–5 to win the Men's Singles tennis title at the 2020 French Open. For the fourth time in his career, Nadal did not drop a set throughout the entire tournament and for the first time in French Open history, neither the men's nor women's singles champions lost a set. Nadal equalled Roger Federer's all-time record of 20 Grand Slam singles titles and extended his own record to 13 titles at the same major tournament. Nadal also became the first player, male or female, to win 100 matches at the French Open and only the second male player, after Federer at the Australian Open and Wimbledon, to win 100 matches at a single Grand Slam tournament. Djokovic was attempting to become the first man in the Open Era to win each major title at least twice.