Tierpark is a Berlin U-Bahn station located on the U 5. It is named after the Tierpark Berlin, one of the two zoological gardens in Berlin.

Prior to the opening of the station, the line was intended to go to Karlshorst in the early 1950s/60s plans. Construction of the station began on 19 September 1969. It was mainly constructed to link to the new tram line along Rhinstraße.

This station was opened in 1973. It was the one and only subterranean U-Bahn station to be built by the East German government. Producers were the VEB Kombinat Tiefbau Berlin. [1]

The new plan was to extend the route beyond the Tierpark extension to the Oberschöneweide, very near to Treptow. In the 1980s, a new plan was developed to run along the VnK Railway to Kaulsdorf, and to create a new stretch as far as Hönow, removing the need to go to Oberschöneweide and Marzahn.

Design of the route took place in 1983/84. The route length was designated at 10.1 km (6.3 mi), with nine new stations. The new route was supposed to be opened in two phases, ending in 1988, to replace the terminus of the former Line E. Construction began on 1 March 1985, with the first to open being Biesdorf-Süd and Elsterwerdaer Platz, and then on to Hönow by 1 July 1989, just a few months before the fall of the Berlin Wall. The line was renumbered to U5 after the Wall fell, in 1 July 1990.

U2 is a line of the Berlin U-Bahn. The U2 line starts at Pankow S-Bahn station, runs through the eastern city centre (Alexanderplatz) to Potsdamer Platz, the western city centre and finally to the Ruhleben terminal station. 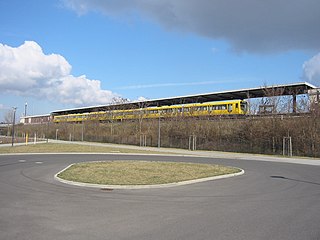 U5 is a line on the Berlin U-Bahn. It runs from Alexanderplatz in Mitte eastwards through Friedrichshain, Lichtenberg and Friedrichsfelde, surfaces in Biesdorf-Süd to pass Kaulsdorf and Hellersdorf above ground and finally reaches city limits at Hönow.

U8 is a line on the Berlin U-Bahn. It has 24 stations and is 18.1 km (11.2 mi) long. The U8 is one of two north–south Berlin U-Bahn lines, and runs from Wittenau to Neukölln via Gesundbrunnen. The original proposal was for a suspended monorail like the Wuppertal Schwebebahn. 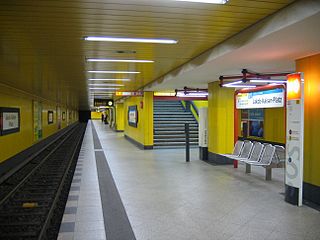 Jakob-Kaiser-Platz is a metro station on the Berlin U-Bahn line U7, located in the Charlottenburg-Nord district. It was opened on 1 October 1980 with the line's extension from Richard-Wagner-Platz to Rohrdamm. The eponymous traffic circle located above the station is named after politician and Resistance fighter Jakob Kaiser (1888–1961). The next station going eastbound is Jungfernheide 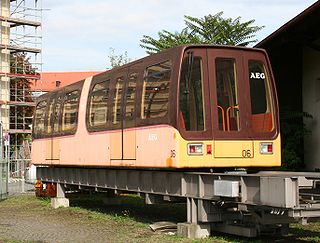 The M-Bahn or Magnetbahn was an elevated Maglev train line operating in Berlin, Germany, experimentally from 1984 and in passenger operation from 1989 to 1991. The line was 1.6 kilometres (0.99 mi) in length, and featured three stations, two of which were newly constructed. The line was built to fill a gap in the West Berlin public transport network created by the construction of the Berlin Wall. It was rendered redundant by the reunification of Berlin and was closed to enable reconstruction of the U2 line.

Bülowstraße is a Berlin U-Bahn station located on the U 2 in the Schöneberg district. It opened in 1902 on the western branch of the Stammstrecke, Berlin's first U-Bahn line. Like the eponymous street, the station is named after the Prussian general Friedrich Wilhelm Freiherr von Bülow. 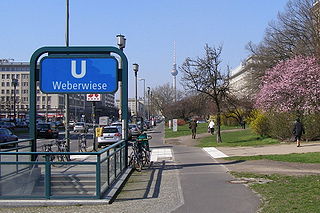 Weberwiese is a Berlin U-Bahn station located on the U 5 line, which currently runs from Alexanderplatz to Hönow. The station is located under Karl-Marx-Allee directly east of Straße der Pariser Kommune. Although the next station on the line is called Frankfurter Tor, the historical city gate Frankfurter Tor actually stood at the location of the Weberwiese station. Several of the stations on this line have been recently redeveloped and are now colour-coded. In 2003, Weberwiese station was renovated and now has a very different appearance, with yellow tiles in contrast to its former white ones. 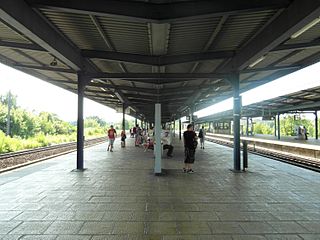 Wuhletal is a railway station in the Marzahn-Hellersdorf district of Berlin. It is served by the S-Bahn line S 5 and the U-Bahn line U 5.

Louis-Lewin-Straße is an underground railway station in the German capital city of Berlin. It is part of the Berlin U-Bahn; the station is located on the U 5. 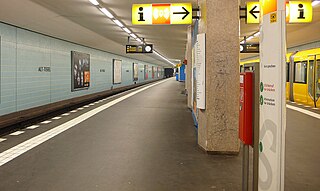 Alt-Tegel is a Berlin U-Bahn station located on the U 6. It was constructed by B. Grimmek and opened as "Tegel" station in 1958. In 1992, the station was renamed to Alt-Tegel. Nearby is the S-Bahn station Berlin-Tegel, and the rename perhaps occurred to avoid confusion.

Berlin-Wittenau is a railway station in the Wittenau district of Berlin, Germany. It is served by the Berlin S-Bahn and numerous local buses. It is also the northern terminus of the Berlin U-Bahn line U 8.

Berlin Hermannstraße is a railway station in the Neukölln district of Berlin. It is served by the S-Bahn lines S 41, S 42, S 45, S 46 and S 47 and the U-Bahn line U 8, of which it is the southern terminus. It was formerly also possible to transfer there to the Neukölln-Mittenwalde railway line, which is now only used for goods traffic. 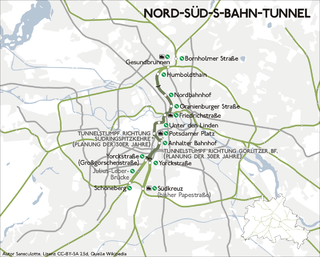 The North–South S-Bahn Tunnel is the central section of the North–South transversal Berlin S-Bahn connection crossing the city centre. It is not to be confused with the Tunnel Nord–Süd Fernbahn, the central tunnel part of the North–South main line used by intercity and regional trains. The S-Bahn North–South line encompasses the route from Bornholmer Straße and Gesundbrunnen via Friedrichstraße and Anhalter Bahnhof to Priesterweg and Schöneberg. 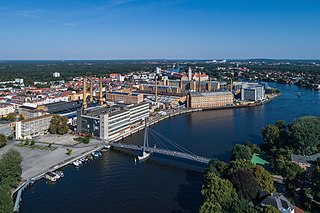 Oberschöneweide is a German locality (Ortsteil) within the Berlin borough (Bezirk) of Treptow-Köpenick. It is, with Niederschöneweide, part of the geographic area of Schöneweide. Until 2001 it was part of the former borough of Köpenick.

The history of the Berlin U-Bahn took its origins in 1880 with an excitation of the entrepreneur Werner Siemens in Berlin to build a high and subway. In the nine years after the founding of the German Empire, the inhabitants of Berlin had risen by over a third, causing increasing traffic problems. Beginning in 1896 then began Siemens & Halske with the construction of the first stretch as overhead railway. On 1 April 1897, the Company has been established for electric elevated and underground railways in Berlin, which took over the further construction and operation and 1929 went up in the Berlin transport company. The 1938 in BVG renamed company was operating the city of Berlin. The BVG is since 1994 a public institution.

Class E is a series of Großprofil multiple units of Berliner Verkehrsbetriebe (BVG) which was exclusively used on East Berlin line E, today line U5 of the Berlin U-Bahn. Except for the two prototypes, all vehicles were built using parts of retired S-Bahn vehicles, namely the bogies and parts of the electrical equipment.