"Tongue Tied" is a song by American indie rock band Grouplove, featured on their debut studio album Never Trust a Happy Song (2011). The song was released as the second single from the album on September 2, 2011. It was featured in an Apple iPod Touch commercial in 2011. [1] On June 18, 2012, "Tongue Tied" reached the number-one position on the Billboard Alternative Songs chart, becoming their first number-one single. In May 2012, the song was covered by Fox television series Glee in the season 3 episode "Nationals". It also appears in The Three Stooges , Wadjda , GT Racing 2: The Real Car Experience and Premature . [2] In 2020, the song received a resurgence on TikTok during the COVID-19 pandemic.

"Tongue Tied" received mixed to negative reviews from critics, with criticism directed towards the use of synthesizers. Despite its reception, it remains one of the band's highest charting singles to date, becoming their first song to chart on the Billboard Hot 100, where it peaked at 42, as well as number 3 on the Rock Songs chart. The song has been performed on various late-night talk shows, as well as on the American musical comedy-drama television series Glee .

"Tongue Tied" was written by the collective members of Grouplove and produced by Ryan Rabin. The song was recorded by Rabin at Captain Cuts Studios in Los Angeles, California. [3] According to lead vocalist Christian Zucconi, "Tongue Tied" was conceived in swift fashion. While composing the piano score for a "really depressing, moody movie", [lower-alpha 1] Zucconi began to play around with various chords before settling on a melody. [4] He then performed an instrumental version for bandmates Hannah Hooper and Sean Gadd.

"Tongue Tied" is a three-minute, 38-second rock and electropop [5] [6] song influenced by indie music. It incorporates elements of synthpop [7] and post-punk. [8] The song is composed in the key of E-flat major [9] using common time and a moderate dance tempo of 106  beats per minute. [10] Andrew Lentz of Drum Magazine noted that "Tongue Tied" has a "dance-y four-on-the-floor feel". [11]

"Tongue Tied" received mixed reviews from critics. Robert Cooke of Drowned in Sound said that the song's "bloated synth sounds like the soundtrack to an advert for some E number-riddled sweets written by Katy Perry, while the almost-rapping in the middle-eight sounds like a Pussycat Dolls pastiche". [7] Matt Edsall of PopMatters said that the song "pumps Passion Pit-like beats that push the band into that same electro-pop category that so many other projects are involved in today, ruining the tone of the album a mere five minutes in". [6] Max Raymond of musicOMH said that the song was a "potential summer smash but too sugar-coated in synths". [12] Huw Jones of Slant Magazine said that "Tongue Tied" and the following track, "Lovely Cup", were lackluster songs that "completely derail the momentum". [13] Matt Collar of AllMusic praised the song for its "rollicking, post-punk exuberance", [8] while Mischa Pearlman of BBC Music said that the song's lyrics were at "beautiful odds with [the song's] bouncy tune". [14]

The music video, directed by Jordan Bahat, for "Tongue Tied" was released to Vevo and YouTube on July 25, 2011, The video has since gained over 32 million views. [15] The video features the band at a party, and the video goes mostly backwards. It shows a man running away from a group of people in a party who are in suits and masks. He trips and lands in an inflatable pool. At the beginning of the video, when it is the morning, he is seen fast asleep with his head in the water but with his body out of the water.

Credits adapted from the liner notes of Never Trust a Happy Song. [3] 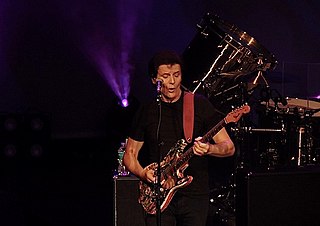 British rock band Bring Me the Horizon have released six studio albums, two live albums, two compilation albums, one remix album, two extended plays (EPs), one demo album, 29 singles, two video albums, 34 music videos, two other releases and two other appearances. Formed in Sheffield in 2004 by vocalist Oliver Sykes, guitarists Lee Malia and Curtis Ward, bassist Matt Kean and drummer Matt Nicholls, the band released their debut EP This Is What the Edge of Your Seat Was Made For on Thirty Days of Nights Records in 2005, which reached number 41 on the UK Budget Albums Chart. After signing with British independent record label Visible Noise, the group released their debut full-length studio album Count Your Blessings in 2006, which reached the top 100 of the UK Albums Chart and the top 10 of the UK Rock & Metal Albums Chart. The 2008 follow-up Suicide Season reached the UK top 50 and charted in the US for the first time when it reached number 107 on the Billboard 200. In November 2009, an expanded version of the album titled Suicide Season Cut Up! was released, featuring remixes and videos. 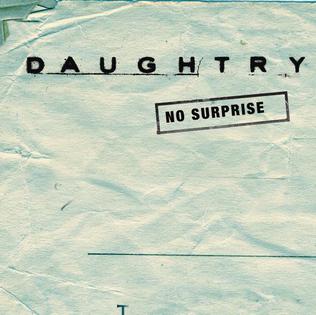 "Saving My Heart" is a song by British rock band Yes, written and produced by Yes guitarist Trevor Rabin. It was the second single released from their 1991 "reunion" album Union, following "Lift Me Up". "Saving My Heart" peaked at number nine on Billboard's Hot Mainstream Rock Tracks chart in 1991.

"Ayer" is a song by Spanish recording artist Enrique Iglesias taken from his first Bilingual album Euphoria. The song was released as the third Spanish single and seventh overall single from the album. It was produced by Enrique's longtime collaborator Carlos Paucar. It was released on 5 July 2011 as digital download. "Ayer" was written by Enrique Iglesias and Descemer Bueno.

Never Trust a Happy Song is the debut album by American indie rock band Grouplove. It was released on September 5, 2011 through Canvasback/Atlantic Records. The album garnered a positive reception but critics were divided on the band's musicianship and content being similar to other bands. Never Trust a Happy Song peaked at number 75 on the Billboard 200 and spawned four singles: "Colours", "Tongue Tied", "Lovely Cup" and "Itchin' on a Photograph". The album was given a Gold certification by the Recording Industry Association of America (RIAA), denoting sales of over 500,000 copies. 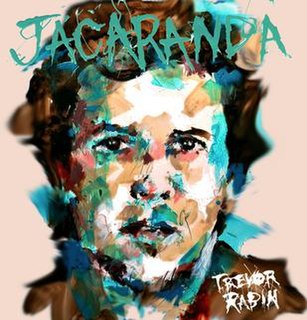 Jacaranda is the fifth studio album by South African musician, songwriter, and producer Trevor Rabin, released on May 8, 2012 on Varèse Sarabande. His first solo album of new material since Can't Look Away (1989), Rabin started work on the album in 2007 by writing music in various sryles that was challenging for him to play, including jazz fusion, rock, blues, classical, and bluegrass. Most of the album's song titles refer to Rabin's experiences while growing up in South Africa. Recording took place over a six-year period at his studio in Los Angeles. Five guest musicians perform on the album, including drummers Lou Molino III, Vinnie Colaiuta, Rabin's son Ryan, bassist Tal Wilkenfeld, and singer Liz Constantine.

Spreading Rumours is the second studio album by the indie rock band Grouplove. It was released on September 17, 2013. Their single "I'm With You" featured as soundtrack in EA Sports game, FIFA 14.

ALOKE is an American post-hardcore band that was formed by Christian Zucconi, Paul DeCourcey and Alex Charpentier in Ossining, New York, in 2004. During their career, the band released one live album and three EPs, before disbanding in the summer of 2009. Thereafter, Zucconi formed Grouplove, which gained popularity with ALOKE song, "Colors You Have". At one time, ALOKE was described as "shoveling out creepy, loud, grueling beauty" and "the fiercest, hardest working, loudest band in NYC".

"Burning Gold" is a song recorded by American singer-songwriter Christina Perri for her second studio album, Head or Heart (2014). The song was written by Perri and Kid Harpoon and produced by John Hill and Butch Walker. It was first released through the iTunes Store as a promotional single for Head or Heart on March 11, 2014, and was subsequently released as the second official single from the album on June 9, 2014. The song was used on seventh episode of second season of the American TV series, The Fosters.

Captain Cuts is a songwriting, record production and remix team based in Los Angeles. The trio is composed of Ben Berger, Ryan McMahon and Ryan Rabin, drummer and producer of the band Grouplove. Collectively they have produced and co-written songs for artists such as Walk the Moon, Bebe Rexha, Halsey, The Chainsmokers, Grouplove, Tove Lo, LÉON, Keith Urban, and Marina, among others. 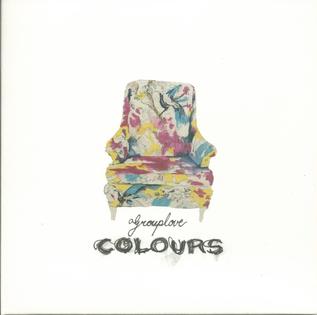 "Colours" is a song by the American indie rock band Grouplove. It is the fourth track from their first album Never Trust a Happy Song, and also appeared on their first EP, Grouplove. The song was the first single released from the album, on July 7, 2011, with a music video. The song was produced by Ryan Rabin. 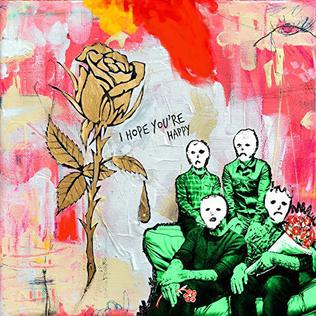 I Hope You're Happy is the ninth studio album by American band Blue October, released on August 17, 2018 on Up/Down and Brando Records.

Lovelytheband is an American indie pop band that formed in 2016 in Los Angeles, California, United States. The band consists of vocalist Mitchy Collins, guitarist Jordan Greenwald, and drummer Sam Price. The band is most known for their single "Broken" which charted on several US Billboard charts.

"Tongue Tied" is a song by American DJ and producer Marshmello, English singer-songwriter Yungblud and American singer Blackbear. It was released on November 13, 2019, through Joytime Collective, Geffen and Interscope Records. A remix EP of the song consisting of remixes by Duke & Jones, PatrickReza, Gentlemen's Club, HiGuys and Near X Far was released on January 15, 2020. This is Marshmello's second single with Interscope Records after "Wolves".