Tony Sings the Great Hits of Today! is a 1970 album by American classic pop and jazz singer Tony Bennett. Done under pressure from his record company for more marketable material, it featured attempts at the Beatles and other current songs and a psychedelic art cover. Both critics and Bennett himself have viewed the album as a career-low.

Clive Davis, head of Columbia Records, saw Bennett's album sales steadily decreasing, and decided the cure was for the singer to record more contemporary material. Davis later wrote, "Musically, Tony was looking over his shoulder. His repertory was dated, and the public wasn't buying it." [2] Similar pressure had been applied on singers such as Lena Horne, Barbra Streisand, and Mel Tormé to record contemporary rock songs. [3] [4] Some artists of the time such as Horne and Peggy Lee welcomed the chance to try their hand at rock music, but Bennett did not. [2]

Bennett later said that, "I started planning the record by listening to as many current hits as I could stand. I mean some of the songs made me physically nauseous." [5] Clive Davis reported that Bennett literally vomited before the first recording session for the album. [5] While many of the songwriters used on the album, such as Lennon and McCartney and Burt Bacharach and Hal David, are highly regarded in their own right, Bennett had no genuine feeling for their style. [4]

Allmusic states that of all the songs Bennett attempted on Tony Sings the Great Hits of Today!, "Is That All There Is?" is the only one he seemed to show any enthusiasm for. [6] Bennett's partly spoken take on The Beatles' "Eleanor Rigby" has garnered the most commentary, with music writer Will Friedwald saying it was recited as if it were Thomas Gray's Elegy Written in a Country Churchyard [7] and Time magazine describing it as "Shatneresque", [8] making reference to Star Trek actor William Shatner's famously bad 1968 interpretation of the same group's "Lucy in the Sky with Diamonds". [9]

The album cover for Tony Sings the Great Hits of Today! also tried to capitalize on current trends and was done in the psychedelic art style of Peter Max. [7] [10] The bell-bottom pants and psychedelic necktie have been noted as contributing to the overall garish appearance. [6]

Years later Bennett would still recall his dismay at being asked to do contemporary material, comparing it to when his seamstress mother was forced to produce a cheap dress. [4] [13] The album also helped speed Bennett's departure from his label: "I left Columbia Records for one reason: They were forcing me to sing contemporary songs and I just couldn't stand it. I actually regurgitated when I made that awful album—I got physically sick. ... If I really adore a song, I just get into the creative zone and try to get the definitive version of the song that would make the composer feel magnificent. Where he would say, 'That's what I was trying to convey.' And Columbia wouldn't let me do that anymore." [14]

At the time, Bennett soon recovered from this album artistically, by returning to the Great American Songbook for his material. [8] His commercial fortunes, however, would not improve until he staged a comeback in the late 1980s and early 1990s by appealing to a younger audience without changing his music in any way. [2] [8]

For many years, the album was out of print and unissued on Compact Disc. [15] This finally changed with the 2011 release of Tony Bennett – The Complete Collection , a 73-CD box set. Giving a new look at the album, The Second Disc catalogue review site wrote that, "Within three years of 1969's controversial Tony Sings the Great Hits of Today! , the album which made the singer physically ill, Bennett was off Columbia. (Even that album doesn’t seem too bad in context; as inappropriate as 'Little Green Apples' and especially a half-spoken, half-sung 'Eleanor Rigby' are, the singer does well by 'The Look of Love', 'Something', 'My Cherie Amour' and 'Live for Life')." [16] 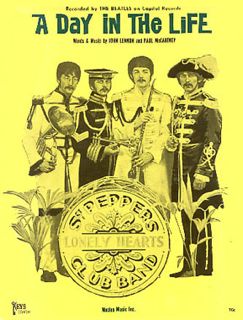 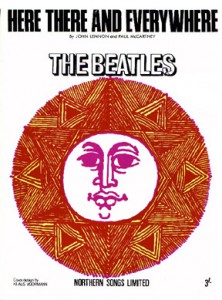 "Here, There and Everywhere" is a song by the English rock band the Beatles from their 1966 album Revolver. A love ballad, it was written by Paul McCartney and credited to Lennon–McCartney. McCartney includes it among his personal favourites of all the songs he has written. In 2000, Mojo ranked it 4th in the magazine's list of the greatest songs of all time. 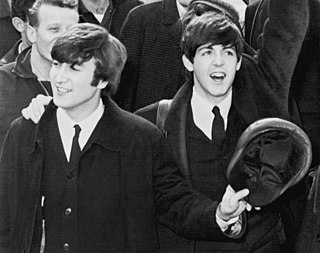 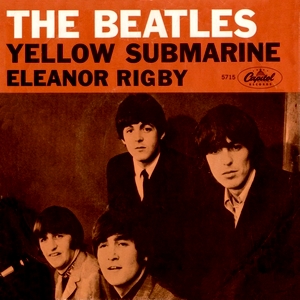 "Eleanor Rigby" is a song by the English rock band the Beatles released on their 1966 album Revolver and as a single with "Yellow Submarine". It was written primarily by Paul McCartney and credited to Lennon–McCartney. 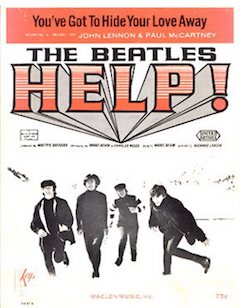 "You've Got to Hide Your Love Away" is a song by English rock band the Beatles. It was written and sung by John Lennon and released on the album Help! in August 1965. 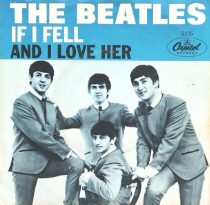 "If I Fell" is a song by English rock band the Beatles which first appeared in 1964 on the album A Hard Day's Night in the United Kingdom and United States, and on the North American album Something New. Written primarily by John Lennon and credited to Lennon–McCartney. "That's my first attempt at a ballad proper. ... It shows that I wrote sentimental love ballads way back when", Lennon stated in his 1980 Playboy interview. Paul McCartney stated that he contributed to the song: "We wrote 'If I Fell' together."

"Till There Was You" is a song written by Meredith Willson for his musical play The Music Man (1957), and which also appeared in the 1962 movie version. It is sung by librarian Marian Paroo to "Professor" Harold Hill toward the end of Act Two. 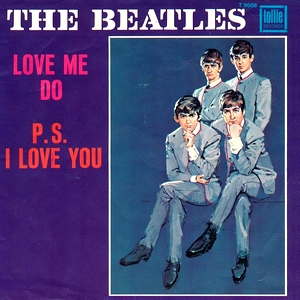 "P.S. I Love You" is a song recorded by English rock band the Beatles in 1962. It was composed principally by Paul McCartney, and produced by Ron Richards. The song was released in the UK on 5 October 1962 as the B-side of their debut single "Love Me Do" and is also included on their debut album Please Please Me (1963). It was later included on the American release Introducing The Beatles (1964), its reissue The Early Beatles (1965), and the Beatles compilation album Love Songs (1977). 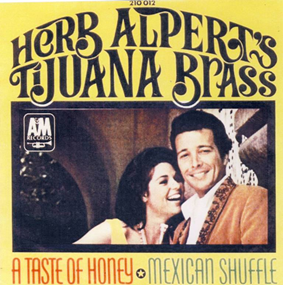 "A Taste of Honey" is a pop standard written by Bobby Scott and Ric Marlow. It was originally an instrumental track written for the 1960 Broadway version of the 1958 British play A Taste of Honey. Both the original and a later recording by Herb Alpert in 1965 earned the song four Grammy Awards. A vocal version of the song -- first recorded by Billy Dee Williams, and then recorded very successfully by Lenny Welch in the summer of 1962 -- was also recorded by the Beatles for their first album in 1963. Barbra Streisand performed the song as part of her cabaret act during 1962, and recorded it in January 1963 for her debut album The Barbra Streisand Album on Columbia, which won a Grammy for Album of the Year (1963). 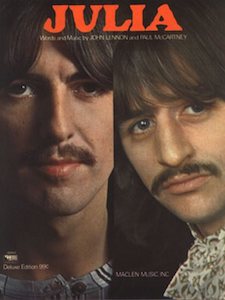 "Julia" is a song by the English rock band the Beatles, performed as a solo work by John Lennon. The song was written by Lennon regarding his mother Julia Lennon, who died in 1958 at age 44.

"Yellow Submarine" is a song by the English rock band the Beatles, written by Paul McCartney and John Lennon, with lead vocals by Ringo Starr. It was included on their 1966 album Revolver and issued as a single, coupled with "Eleanor Rigby". The single went to number one on every major British chart, remained at number one for four weeks, and charted for 13 weeks. It won an Ivor Novello Award "for the highest certified sales of any single issued in the UK in 1966". In the US, the song peaked at number two on the Billboard Hot 100 chart, behind "You Can't Hurry Love" by the Supremes and it became the most successful Beatles song to feature Starr as lead vocalist. 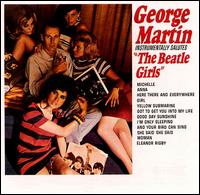 George Martin Instrumentally Salutes The Beatle Girls is a 1966 album by George Martin & His Orchestra. It is the third of a series of albums by Martin featuring instrumental arrangements of Beatle songs. The album was issued on CD by One Way Records. 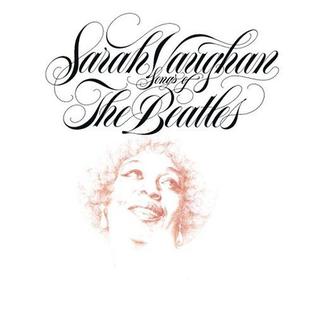 Songs of the Beatles is a 1981 album by Sarah Vaughan of songs by The Beatles. 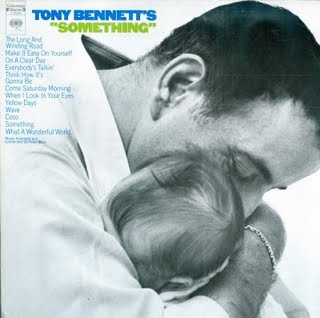 Tony Bennett's "Something" is a 1970 studio album by Tony Bennett. As with Bennett's previous album, Tony Sings the Great Hits of Today!, it contains renditions of contemporary pop songs, including "Something", which had appeared on the earlier release.

Johnny Mathis Sings is an album by American pop singer Johnny Mathis that was released by Mercury Records on March 10, 1967 and was the last of his 11 studio projects for the label. Eight of the twelve tracks were recorded since the completion of his previous LP, So Nice, while four of the tracks were leftovers from the recording sessions for previous Mercury albums. The finished product included a number from Broadway's The Roar of the Greasepaint—the Smell of the Crowd, a cover of the Beatles hit "Eleanor Rigby", two offerings from songwriters Burt Bacharach and Hal David, and three cuts that originated in film scores but had lyrics added later: the melody for "Strangers in the Night" was written for A Man Could Get Killed; "Somewhere My Love" began as "Lara's Theme" from Doctor Zhivago; and "Lovers in New York" started out as the instrumental title track from Breakfast at Tiffany's.

"Got to Get You into My Life" is a song by the English rock band the Beatles, first released in 1966 on their album Revolver. It was written by Paul McCartney, though officially credited to Lennon–McCartney. The song is an homage to the Motown Sound, with colourful brass instrumentation, and lyrics that suggest a psychedelic experience. "It's actually an ode to pot," McCartney explained. A cover version by Cliff Bennett and the Rebel Rousers, produced by McCartney, peaked at number six in 1966 in the UK. The song was issued in the United States as a single from the Rock 'n' Roll Music compilation album in 1976, six years after the Beatles disbanded. It reached number seven on the Billboard Hot 100 chart, the Beatles' last top ten US hit until their 1995 release "Free as a Bird". 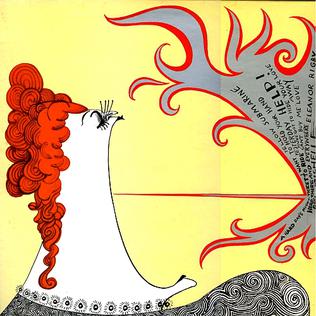 Beatles Arias is a 1967 LP recorded by American-born mezzo-soprano Cathy Berberian. The original album consists of twelve of Berberian's distinctive operatic-style cover versions of songs by The Beatles, scored for a small chamber ensemble, consisting of a string quartet or wind quintet with harpsichord or organ. The chamber arrangements were by Paul Boyer, and featured Guy Boyer on harpsichord and organ, with an unnamed French string quartet and a wind quintet. Berberian was inspired to create this album while singing along to her 13-year-old daughter's Beatles records.

Live at the Desert Inn is a live album by American singer Bobby Darin, released in 1987.

Rubber Soulive is the 10th studio album by Soulive, on which the trio covers 11 Beatles's songs.