Tour de Singkarak (abbreviated TdS) is an annual professional road bicycle racing stage race held in West Sumatra, Indonesia, and named after the Lake Singkarak. First staged in 2009, Tour de Singkarak is classified by the Union Cycling International (UCI) as a 2.2 category race as part of the UCI Asia Tour. It covers more than 1267 kilometres — from/to Padang passing around lake Singkarak and runs through inland West Sumatran cities — and lasted for a week and held annually. This exciting tour across the picturesque West Sumatra countryside`s scenic landscapes, comprising beaches, blue lakes, and numerous hairpin bends, as they climb up to the foot of the volcanoes. The total prize money is IDR 1,000,000,000 (US$100,000). BNI-Maybank was the platinum sponsor of the Tour De Singkarak since 2009 with the Ministry of Culture and Tourism of Indonesia. TDS is the biggest international cycling race in Indonesia, having the fifth largest audience in the world, it attracted many top international cyclists to participate in this world famous annual sports event. [1] 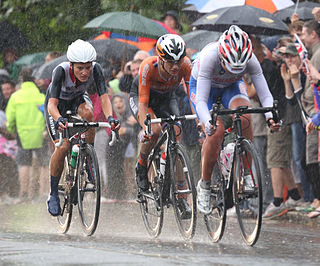 In sports, a stage, or leg, or heat, is a unit of a race which has been divided in several parts for the reason such as length of the distance to be covered, as in a multi-day event. Usually, such a race consists of "ordinary" stages, but sometimes stages are held as an individual time trial or a team time trial. Long races such as the Tour de France, Absa Cape Epic or the Giro d'Italia are known for their stages of one day each, whereas the boat sailing VELUX 5 Oceans Race is broken down in usually four stages of several weeks duration each, where the competitors are racing continuously day and night. In bicycling and running events, a race with stages is known as a stage race. 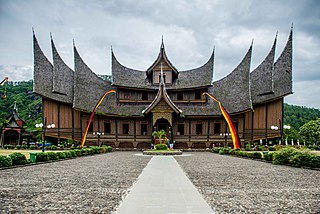 West Sumatra is a province of Indonesia. It is located on the west coast of the island of Sumatra. It had a population of 4,846,909 at the 2010 Census and of 5,190,577 at the 2015 Intermediate Census; the latest official estimate for mid 2019 shows a population of 5,479,491. West Sumatra is sub-divided administratively into twelve regencies and seven cities. It has relatively more cities than other provinces in Indonesia, except Java province. Its capital is Padang.

Tour de Singkarak 2009 was held for the first time in 29 April to 3 May 2009 under full sponsorship of Ministry of Culture and Tourism of Indonesia in order to promote tourism in West Sumatra. Tour de Singkarak 2009 attracted teams from 15 countries. The race covers 459 kilometres in five stages, lasted for seven days with total prize money 600 million rupiah. 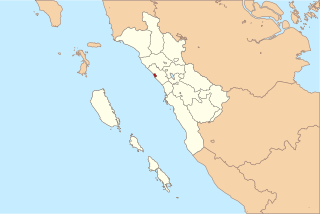 Tour de Singkarak 2010 was held in 1–6 June 2010, joined by 12 foreign teams and 10 Indonesian teams. The race covers the total distance 551.7 kilometres in six stages. The tour was sponsored by Ministry of Culture and Tourism of Indonesia with support from West Sumatran cities and regencies (kabupaten).

Bukittinggi, is the third largest city in West Sumatra, Indonesia, with a population of over 124,000 people and an area of 25.24 km². It is in the Minangkabau Highlands, 90 km by road from the West Sumatran capital city of Padang. The whole area is directly adjacent to the Agam Regency, and is located at 0°18′20″S100°22′9″E, near the volcanoes Mount Singgalang (inactive) and Mount Marapi. At 930 m above sea level, the city has a cool climate with temperatures between 16.1° to 24.9°C. 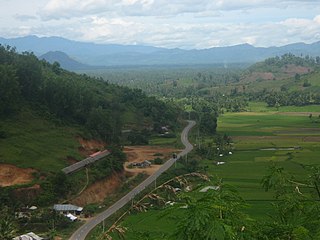 Payakumbuh is the second largest city in West Sumatra, Indonesia, with a population of over 127,000 people and an area of 80.43 km². It is in the Minangkabau Highlands, 120 km by road from the West Sumatran capital city of Padang and 180 km from the Riau capital city of Pekanbaru. The whole area is directly adjacent to the Lima Puluh Kota Regency. It is located near the volcano Mount Merapi, Mount Sago, and Bukit Barisan. Payakumbuh means "grassy swamp" in the Minangkabau language. It suggests that the area was originally swampy. 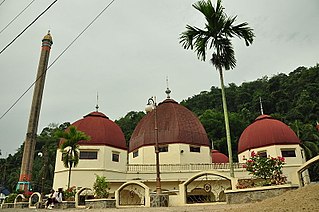 Sawahlunto is a city in West Sumatra, Indonesia, 90 kilometres from Padang. Sawahlunto is known as the site for the oldest coal mining site in Southeast Asia. Sawahlunto is geographically located in a narrow valley along the Bukit Barisan mountains, and surrounded by several hills, namely Bukit Polan, Bukit Pari, and Bukit Mato. The town has a land area of 276 sq. km, and had a population of 59,821 as of 2014.

Tour de Singkarak 2011 was held in 6–12 June 2011, covers 743.5 kilometres in seven stages across 12 cities and regencies in West Sumatra. Several tourism spots were crossed in this edition, such as Arau valley, Lake Maninjau, Kelok 44, and twin lakes Lake Diatas and Lake Dibawah.

Tour de Singkarak 2012 was held on 3 June 2012, covers 856 kilometres in seven stages which the routes has been surveyed by Amaury Sport Organization which surveyed also Tour de France routes. [2]

2018 Tour de Singkarak was held from 4-11 November, marks its 10th anniversary. Twenty one cycling teams from 26 countries, including four domestic teams and one local team, will participate. This year is extended to 1,267 kilometers (km), from 1,250 km in the previous 2017 TDS, covers 16 districts and cities [9] .

The event was held in eight stages,

2019 Tour de Singkarak covers 1,362 kilometers in West Sumatra and Jambi provinces. Ninety-eight cyclists from 24 teams and 24 countries have signed up for the tournament, held November 3-10, 2019.

Rendang is an Indonesian spicy red meat dish originating from the Minangkabau people of Indonesia. It has spread across Indonesia to the cuisines of neighbouring Southeast Asian countries. One of the characteristic foods of Minangkabau culture, it is traditionally served at ceremonial occasions and to honour guests during festive occasions such as wedding feasts and Hari Raya. Rendang is also traditionally served among the Malay community and the Maranao people. Although culinary experts often describe rendang as a curry, the dish is usually not considered as such in Indonesia since it is richer and contains less liquid than is normal for Indonesian curries. 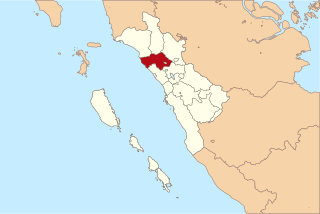 Agam Regency is a regency of West Sumatra, Indonesia. It has an area of 2,232.30 km² and a population of 455,484 at the 2010 Census; in January 2014 this had risen to 478,490. The capital is Lubuk Basung. Bukittinggi city is surrounded by this regency but is not administratively included in it. 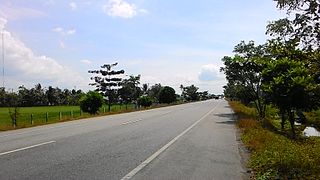 The Trans-Sumatran Highway is a primary north-south road in the Indonesian island of Sumatra, 2,508.5 km longs, and connecting the north of the island in Banda Aceh to Bandar Lampung in the south, running through many major cities, traverse Medan city, Pekanbaru City, Jambi city, Palembang city on the way. Upgrade work is expected to begin in March, 2013 to make it a full-fledged highway, including land acquisition. 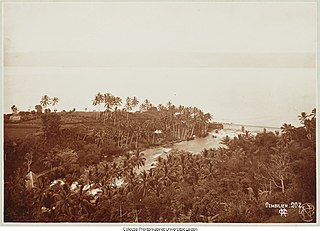 Lake Singkarak is a lake in West Sumatra, Indonesia. It is located between the regencies of Tanah Datar and Solok Regency. It has an area of 107.8 km², being approximately 21 km long and 7 km wide. The natural outlet for excess water is the Ombilin river which flows eastward to the Strait of Malacca. A hydroelectric project, however, has diverted most of the lake outflow to the Anai river which flows westward into the Indian Ocean near Padang. This Singkarak power station uses this water to generate power for the West Sumatra and Riau provinces. A species of fish called ikan bilih is endemic to the lake, and is harvested for human consumption. A railway line, which connects Padang and Sawahlunto-Sijunjung, skirts the length of the lake on the eastern side. 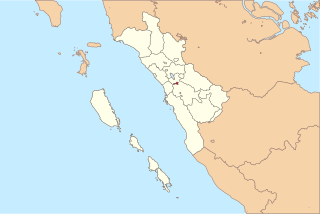 Solok is a city in West Sumatra, Indonesia. Its motto is Kota Beras, abbreviation from "Bersih, Elok, Rapi, Aman dan Sejahtera". It has an area of 57.64 km² and a population of 62,483 people in 2014. Solok topography varies between the plains and hilly with a height of 390 m above sea level. There are three tributaries that cross Solok, namely Batang Lembang, Batang Gawan, and Batang Air Binguang. 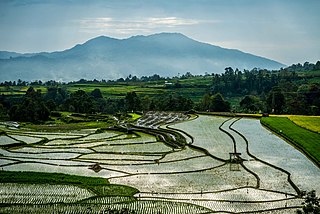 Tanah Datar Regency is a regency (kabupaten) in West Sumatra province, Indonesia. The regency has a population of 338,584 at the 2010 Census, which according to official estimates had risen to 356,085 in January 2014. The capital of the regency is Batusangkar. The town of Padang Panjang is also geographically located within the regency but constitutes a municipality of its own.

Padang Pariaman Regency is a regency (kabupaten) of West Sumatra, Indonesia. The regency capital is Parit Malintang. It has an area of 1,328.79 km2, and the population was 390,204 at the 2010 Census; by January 2014 the official estimate was 411,378. West Sumatra's capital and biggest city, Padang, is surrounded by this regency. 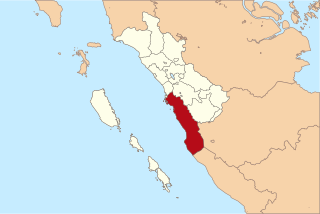 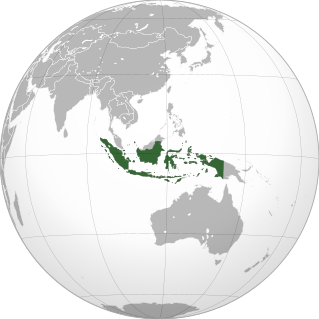 The province of the West Sumatra in Indonesia is divided into kabupaten or regencies which in turn are divided administratively into subdistricts or kecamatan.

The 2012 Tour de Singkarak was the 4th edition of the Tour de Singkarak, one of Indonesian official tournament series of Union Cycliste International (UCI). It started on 4 June in Sawahlunto and ended in the Padang on 10 June. Like previous edition, the international cyclists competed in 7 stages over 7 days, which the routes has been surveyed by Amaury Sport Organization which surveyed also Tour de France routes. Covering a distance of 854 kilometres with prize money total to IDR 1 billion. The route across Lake Singkarak on stage 2 and stage 5.

Sungai Durian may refer to: 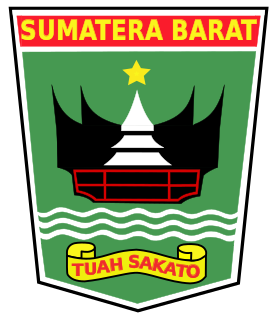 The West Sumatra Regional People's Representative Council is the unicameral legislative body within the regional government of the Indonesian province of West Sumatra. The council is composed of 65 members elected via party lists in the 2019 general election.