Triparma is a genus of unicellular algae in the family Triparmaceae in the order Parmales. They form siliceous plates on the cell surface that aid in identification. Triparma is distinguished by its possession of three shield plates, three triradiate girdle plates, a triradiate girdle plate with notched ends, and a small ventral plate. [1] It was first described by Booth & Marchant in 1987 and the holotype is Triparma columacea. [2]

The silicated Triparma laevis (top) and a drawing of its shell, scale bar = 1 μm.

Triparma cells have two forms: the motile, naked form and the non-motile siliceous form. The motile cells propelled by two flagella of unequal length, typical of heterokonts. The non-motile forms do not possess flagella but instead have a silicified cell wall with a distinctive plate morphology: three shield plates, three oblong girdle plates, a triradiate dorsal plate with rounded ends, and a large ventral plate. Both forms contain a single, dorsal chloroplast that contains chlorophylls a and c1-3 as well as fucoxanthin. They are typically 1-2 μm in size and generally spherical or heart-shaped. [4]

The genus Triparma is actively studied because of their close relationship to the diatoms, and it has been discovered that they have different silica-limitation responses. While diatoms stop growing and cell division is inhibited under low-silica conditions, Triparma continues to grow and divide normally even under nanomolar concentrations of silica, although the silica plates are no longer produced. [5]

The genus now includes all species from the non-monophyletic genus Bolidomonas, according to Ichinomiya et al (2016). [4] [7] 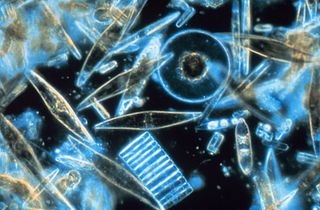 Diatoms are a major group of algae, specifically microalgae, found in the oceans, waterways and soils of the world. Living diatoms make up a significant portion of the Earth's biomass: they generate about 20 to 50 percent of the oxygen produced on the planet each year, take in over 6.7 billion metric tons of silicon each year from the waters in which they live, and constitute nearly half of the organic material found in the oceans. The shells of dead diatoms can reach as much as a half-mile deep on the ocean floor, and the entire Amazon basin is fertilized annually by 27 million tons of diatom shell dust transported by transatlantic winds from the African Sahara, much of it from the Bodélé Depression, which was once made up of a system of fresh-water lakes.

The choanoflagellates are a group of free-living unicellular and colonial flagellate eukaryotes considered to be the closest living relatives of the animals. Choanoflagellates are collared flagellates having a funnel shaped collar of interconnected microvilli at the base of a flagellum. Choanoflagellates are capable of both asexual and sexual reproduction. They have a distinctive cell morphology characterized by an ovoid or spherical cell body 3–10 µm in diameter with a single apical flagellum surrounded by a collar of 30–40 microvilli. Movement of the flagellum creates water currents that can propel free-swimming choanoflagellates through the water column and trap bacteria and detritus against the collar of microvilli, where these foodstuffs are engulfed. This feeding provides a critical link within the global carbon cycle, linking trophic levels. In addition to their critical ecological roles, choanoflagellates are of particular interest to evolutionary biologists studying the origins of multicellularity in animals. As the closest living relatives of animals, choanoflagellates serve as a useful model for reconstructions of the last unicellular ancestor of animals. 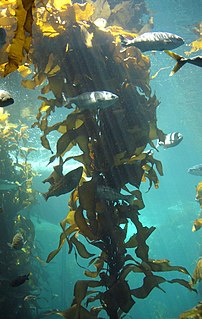 The brown algae, comprising the class Phaeophyceae, are a large group of multicellular algae, including many seaweeds located in colder waters within the Northern Hemisphere. Most brown algae live in marine environments, where they play an important role both as food and as a potential habitat. For instance, Macrocystis, a kelp of the order Laminariales, may reach 60 m (200 ft) in length and forms prominent underwater kelp forests. Kelp forests like these contain a high level of biodiversity. Another example is Sargassum, which creates unique floating mats of seaweed in the tropical waters of the Sargasso Sea that serve as the habitats for many species. Many brown algae, such as members of the order Fucales, commonly grow along rocky seashores. Some members of the class, such as kelps, are used by humans as food. 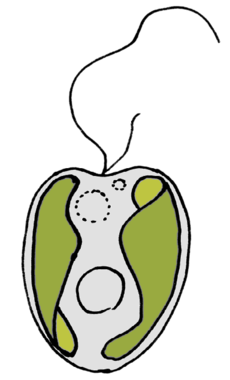 Heterokonts are a group of protists. The group is a major line of eukaryotes. Most are algae, ranging from the giant multicellular kelp to the unicellular diatoms, which are a primary component of plankton. Other notable members of the Stramenopiles include the (generally) parasitic oomycetes, including Phytophthora, which caused the Great Famine of Ireland, and Pythium, which causes seed rot and damping off.

Photosynthetic picoplankton or picophytoplankton is the fraction of the phytoplankton performing photosynthesis composed of cells between 0.2 and 2 µm in size (picoplankton). It is especially important in the central oligotrophic regions of the world oceans that have very low concentration of nutrients. 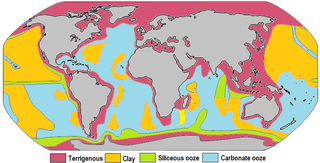 Marine sediment, or ocean sediment, or seafloor sediment, are deposits of insoluble particles that have accumulated on the seafloor. These particles have their origins in soil and rocks and have been transported from the land to the sea, mainly by rivers but also by dust carried by wind and by the flow of glaciers into the sea. Additional deposits come from marine organisms and chemical precipitation in seawater, as well as from underwater volcanoes and meteorite debris. 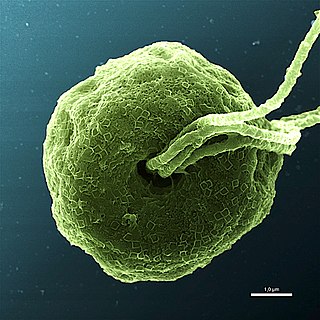 The prasinophytes are a group of unicellular green algae. Prasinophytes mainly include marine planktonic species, as well as some freshwater representatives. The prasinophytes are morphologically diverse, including flagellates with one to eight flagella and non-motile (coccoid) unicells. The cells of many species are covered with organic body scales; others are naked. Well studied genera include Ostreococcus, considered to be the smallest free-living eukaryote, and Micromonas, both of which are found in marine waters worldwide. Prasinophytes have simple cellular structures, containing a single chloroplast and a single mitochondrion. The genomes are relatively small compared to other eukaryotes . At least one species, the Antarctic form Pyramimonas gelidicola, is capable of phagocytosis and is therefore a mixotrophic algae. 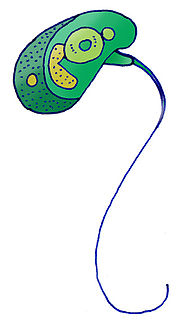 Micromonas is a genus of green algae in the family Mamiellaceae.

Chaetoceros is probably the largest genus of marine planktonic diatoms with approximately 400 species described, although many of these descriptions are no longer valid. It is often very difficult to distinguish between different Chaetoceros species. Several attempts have been made to restructure this large genus into subgenera and this work is still in progress. However, most of the effort to describe species has been focused in boreal areas, and the genus is cosmopolitan, so there are probably many tropical species still undescribed. Some species are known from the fossil record, from the Quaternary of Sweden. It is the type genus of its family.

Bolidophyceae is a class of photosynthetic heterokont picophytoplankton, and consist of less than 20 known species. They are distinguished by the angle of flagellar insertion and swimming patterns as well as recent molecular analyses. Bolidophyceaes are sister taxa to the diatoms (Bacillariophyceae) but lack characteristic theca, and have been proposed as an intermediate group between the diatoms and all other heterokonts. 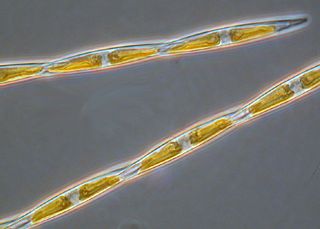 Pseudo-nitzschia is a marine planktonic diatom genus that accounts for 4.4% of pennate diatoms found worldwide. Some species are capable of producing the neurotoxin domoic acid (DA), which is responsible for the neurological disorder in humans known as amnesic shellfish poisoning (ASP). Currently, 58 species are known, 28 of which have been shown to produced DA. It was originally hypothesized that only dinoflagellates could produce harmful algal toxins, but a deadly bloom of Pseudo-nitzschia occurred in 1987 in the bays of Prince Edward Island, Canada, and led to an outbreak of ASP. Over 100 people were affected by this outbreak after consuming contaminated mussels; three people died. Since this event, no additional deaths have been attributed to ASP, though the prevalence of toxic diatoms and DA has increased worldwide. This anomaly is likely due to increased awareness of harmful algal blooms (HABs) and their implications for human and ecosystem health.

Bacillaria is a diatom genus in the family Bacillariaceae. 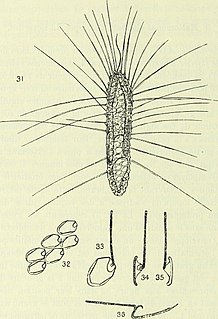 Mallomonas is a genus comprising unicellular algal eukaryotes and characterized by their intricate cell coverings made of silica scales and bristles. The group was first named and classified by Dr. Maximilian Perty in 1852. These organisms live in freshwater and are widely distributed around the world. Some well known species include Mallomonas caudata and Mallomonas splendens. 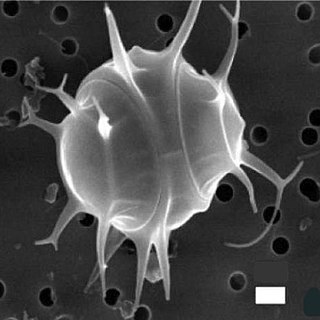 The Parmales are an order of marine microalgae within the Bolidophyceae class. They are found worldwide and characterized by a cell wall composed of 5-8 interlocking silica plates with distinct forms. They were initially thought to be loricate choanoflagellates but were shown to be a separate phyla entirely upon the discovery of chloroplasts, placing it among the photosynthetic stramenopiles.

Tetraparma is a genus of unicellular algae in the family Triparmaceae in the order Parmales. They form siliceous plates on the cell surface that aid in identification. Tetraparma is distinguished by its possession of three shield plates that may have everted rims, three triradiate girdle plates, a triradiate dorsal plate with notched ends, and a large ventral plate. It was first described by Booth & Marchant in 1987 and the holotype is Triparma columacea.

Marine protists are defined by their habitat as protists that live in marine environments, that is, in the saltwater of seas or oceans or the brackish water of coastal estuaries. Life originated as single-celled prokaryotes and later evolved into more complex eukaryotes. Eukaryotes are the more developed life forms known as plants, animals, fungi and protists. Protists are the eukaryotes that cannot be classified as plants, fungi or animals. They are usually single-celled and microscopic. The term protist came into use historically as a term of convenience for eukaryotes that cannot be strictly classified as plants, animals or fungi. They are not a part of modern cladistics, because they are paraphyletic.

Many protists have protective shells or tests, usually made from silica (glass) or calcium carbonate (chalk). Protists are mostly single-celled and microscopic. Their shells are often tough mineralised forms that resist degradation, and can survive the death of the protist as a microfossil. Although protists are very small, they are ubiquitous. Their numbers are such that their shells play a huge part in the formation of ocean sediments, and in the global cycling of elements and nutrients.

A protist is any eukaryotic organism that is not an animal, plant, or fungus. While it is likely that protists share a common ancestor, the last eukaryotic common ancestor, the exclusion of other eukaryotes means that protists do not form a natural group, or clade. Therefore, some protists may be more closely related to animals, plants, or fungi than they are to other protists. However, like algae, invertebrates and protozoans, the grouping is used for convenience.