Tripneustes is a genus of sea urchins belonging to the family Toxopneustidae. [1]

This genus contains many extinct species, such as:

These sea urchins have been recorded as fossils from Miocene to Recent (from 15.97 to 0.0 Ma). Fossils have been found in the sediments of Southern Europe, Mediterranean and North Africa, Caribbean, Western coast of America and throughout the Indo-Pacific. [2] 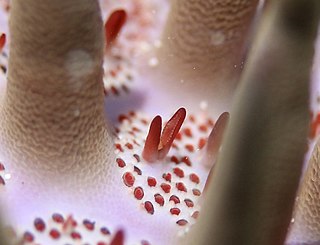 A pedicellaria is a small wrench- or claw-shaped appendage with movable jaws, called valves, commonly found on echinoderms, particularly in sea stars and sea urchins. Each pedicellaria is an effector organ with its own set of muscles, neuropils, and sensory receptors and is therefore capable of reflex responses to the environment. Pedicellariae are poorly understood but in some taxa, they are thought to keep the body surface clear of algae, encrusting organisms, and other debris in conjunction with the ciliated epidermis present in all echinoderms.

Diadema setosum is a species of long-spined sea urchin belonging to the family Diadematidae. It is a typical sea urchin, with extremely long, hollow spines that are mildly venomous. D. setosum differs from other Diadema with five, characteristic white dots that can be found on its body. The species can be found throughout the Indo-Pacific region, from Australia and Africa to Japan and the Red Sea. Despite being capable of causing painful stings when stepped upon, the urchin is only slightly venomous and does not pose a serious threat to humans.

Coelopleurus is an extant genus of echinoids with fossil records dating back to the Eocene, with remains found in Europe and North America.

Hemicentrotus pulcherrimus is a species of sea urchin, the only one in the monotypic genus Hemicentrotus. It was first described by the American engineer and marine zoologist Alexander Agassiz in 1864 as Psammechinus pulcherrimus. Its range extends along the coasts of Korea and China, and in Japan from Kyūshū to Ishikari Bay. An edible species, it is harvested from Kyūshū to Fukui, in the Sea of Japan.

Cassiduloida is an order of sea urchins. The group was extremely diverse with many families and species during the Mesozoic, but today, only seven extant species remain.

Tripneustes ventricosus, commonly called the West Indian sea egg or white sea urchin, is a species of sea urchin. It is common in the Caribbean Sea, the Bahamas and Florida and may be found at depths of less than 10 metres (33 ft).

Toxopneustidae is a family of globular sea urchins in the class Echinoidea. 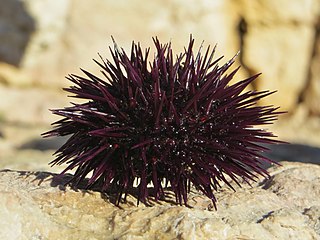 The Camarodonta are an order of globular sea urchins in the class Echinoidea. The fossil record shows that camarodonts have been in existence since the Lower Cretaceous. 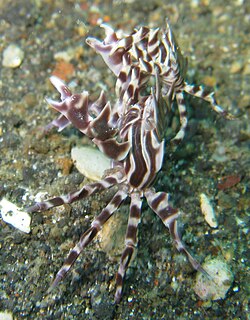 Zebrida is a small genus of distinctive striped crabs, known as zebra crabs, that live in association with sea urchins in the Indo-Pacific. 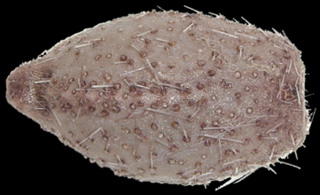 Holasteroida is an order of irregular sea urchins.

Tripneustes depressus, the white sea urchin or sea egg, is a species of sea urchin in the family Toxopneustidae. It is found on the seabed in the tropical eastern Pacific Ocean including Mexico, Panama, Ecuador and the Galápagos Islands.

Irregularia is an extant infraclass of sea urchins that first appeared in the Lower Jurassic.

The Neognathostomata are a superorder of sea urchins.

The Echinothuriidae are a family of sea urchins in the order Echinothurioida. Due to their soft skeletons, most are called "leather urchins", but species in the genus Asthenosoma are also known as "fire urchins" due to their bright colors and painful, venomous sting.

Athanas areteformis is a species of small alpheid shrimp from the Indo-West Pacific.

Chondrocidaris is a genus of sea urchins of the family Cidaridae described in 1863 by Alexander Agassiz. There are two living species and several fossil species dating as far back as the Miocene.

White sea urchin is a common name for several sea urchins and may refer to:

Tetragramma is a genus of fossil sea urchins known from the Upper Jurassic (Oxfordian) to the Upper Cretaceous (Turonian). 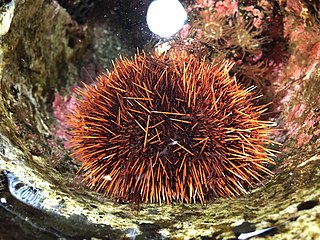 Pseudocentrotus depressus, commonly known as the pink sea urchin, is a species of sea urchin, one of only two species in the genus Pseudocentrotus. It was first described in 1864 by the American marine zoologist Alexander Agassiz as Toxocidaris depressus, having been collected during the North Pacific Exploring and Surveying Expedition undertaken by Captain Cadwalader Ringgold and later Captain John Rodgers.