Ulsan Station (Tongdosa) is a South Korean high-speed rail station located in Samnam-eup, Ulju-gun. It is on Gyeongbu High Speed Railway and named Ulsan Station with subname Tongdosa, which is located in Yangsan, nearer than downtown Ulsan from the station. The existing Ulsan Station in Samsan-Dong, Nam-gu has been renamed to Taehwagang station. [2]

The subname of Ulsan Station is Tongdosa, the temple located in Yangsan, not Ulsan. Some Christians didn't agree with the subname, arguing that it is a religious problem. But the Korail made a vote, resulted 7 of 9 committee agreed with the 'Tongdosa' subname. Nonetheless, the subname had not been displayed in the station until 2012.

Ulsan, officially the Ulsan Metropolitan City, and nicknamed Hyundai City, is South Korea's seventh-largest metropolitan city and the eighth-largest city overall, with a population of over 1.1 million inhabitants. It is located in the south-east of the country, neighboring Busan to the south and facing Gyeongju to the north. 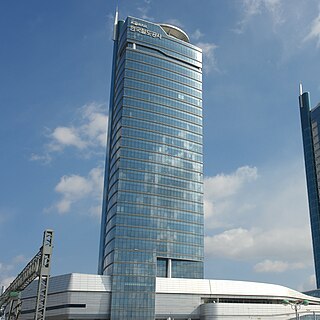 The Korea Railroad Corporation, branded as KORAIL, is the national railway operator in South Korea. Currently, KORAIL is a public corporation, managed by Ministry of Land, Infrastructure and Transportation.

The Gyeongbu Line (Gyeongbuseon) is a railway line in South Korea and is considered to be the most important and one of the oldest ones in the country. It was constructed in 1905, connecting Seoul with Busan via Suwon, Daejeon, and Daegu. It is by far the most heavily travelled rail line in South Korea. 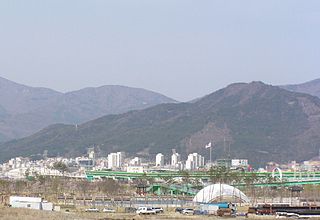 Yangsan is a city in Gyeongsangnam-do Province, South Korea. 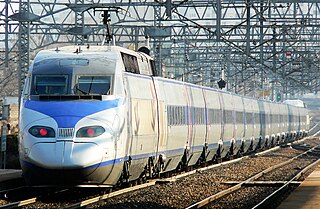 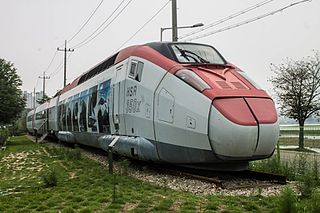 HSR-350x, alternatively called G7, KHST or NG-KTX, is a South Korean experimental high-speed train. It was developed and built in a joint project of government research institutes, universities and private companies that started in 1996, which aimed to reduce import dependence in high-speed rail technology. New components developed for the HSR-350x included motors, electronics, and the carbody of passenger cars. Test runs were conducted between 2002 and 2008. The experimental train achieved the South Korean rail speed record of 352.4 km/h (219.0 mph) in 2004. The HSR-350x was the basis for Korail's KTX-II (KTX-Sancheon) commercial high-speed trains.

Cheonan–Asan station (Onyangoncheon) is a ground-level train station located mostly in Asan, Chungcheongnam-do, although part of it lies in the neighboring city of Cheonan. This station serves high-speed KTX trains that run from Seoul to either Busan or Mokpo. It is connected to Asan station, a railway station on the Janghang Line which is also served by Line 1 of the Seoul Subway.

The Gyeongbu high-speed railway, also known as Gyeongbu HSR, is South Korea's first high-speed rail line from Seoul to Busan. KTX high-speed trains operate three sections of the line: on April 1, 2004, the first between a junction near Geumcheon-gu Office station, Seoul and a junction at Daejeonjochajang station north of Daejeon, and a second between a junction at Okcheon station, southeast of Daejeon, and a junction near Jicheon station, north of Daegu entered service; then on November 1, 2010, the third section, between a junction west of Daegu and Busan became operational. The missing gaps across the urban areas of Daejeon and Daegu were in construction for an expected opening in 2014, separate tracks into Seoul Station were also planned. The temporary ends of the three sections were connected to the parallel conventional Gyeongbu Line by tracks that will serve as interconnector branches upon the completion of the entire line. On August 1, 2015, construction on urban areas of Daejeon and Daegu were completed; all the sections of HSR line were connected.

The Honam high-speed railway, also known as Honam HSR, is a high-speed rail between Osong and Mokpo in South Korea. The line is a part of Korail's Korea Train Express (KTX) system, accelerating Seoul–Mokpo and Seoul–Gwangju KTX high-speed services which currently use the existing conventional Honam Line. On April 1, 2015, the line was inaugurated by the South Korean President Park Geun-hye with the attendance of 1200 invited guests and members of the public at Gwangju Songjeong Station in Gwangju, the line's terminus. The line diverges from Osong Station on the Gyeongbu high-speed railway, and stops at Gongju, Iksan, Jeongeup Stations. Journey times between Seoul and Gwangju has been cut from 2 h 40 min to just 90 min, making daily commuting possible. The Honam HSR is intended to bring business, and economic opportunities to the province of Jeollanam-do, which has seen slower development than other parts of South Korea. The line has been open to the public since April 2, 2015 for revenue service.

Miryang station is on South Korea's high-speed KTX railway network, 55 km south of Dongdaegu Station. Miryang station is an important branch of the Gyeongbu and Gyeongjeon lines. The surrounding area is filled with numerous tourist attractions such as Ice Valley, Pyochungsa Temple, Pyochungbi, Jaejak Mountain and Unmun Mountain, as well as famous mountains called Yeongnam Alps. Especially in summer, there is a theater festival held in Miryang Theater Village and a cool ice valley without long clothes. It is a station that is the center of economy and tourism.

Geumcheon-gu Office Station, formerly known as Siheung Station, is a station on the Line 1 of the Seoul Subway, as well as the Gyeongbu Line. Commuter rail trains on Line 1 travel southwards from here to Anyang, Suwon, Pyeongtaek and Cheonan Stations via the Gyeongbu Line.

The KTX-I, also known as the TGV-K or Korail Class 100000, is a South Korean high speed train class based on the French TGV Réseau. The 20-car formation of the trainsets without restaurant car is optimized for high capacity. The 46 trainsets were built partly in France and partly in South Korea in the framework of a technology transfer agreement, which was the basis for further domestic high-speed train development in South Korea.

The Super Rapid Train, often known as SRT, is a high-speed rail service operated by SR Corporation. The service starts at Suseo Station in southeast Seoul and terminates at either Busan Station or Mokpo Station.