The former United Hebrews of Ocala synagogue is a historic Carpenter Gothic building located at 729 N.E. 2nd Street, in the Tuscawilla Park Historic District of Ocala, Florida. Built in 1888, it was one of the first synagogues in Florida. [1] It is listed in the Marion County section of A Guide to Florida's Historic Architecture, published in 1989 by the University of Florida Press in Gainesville. In 1963, the congregation adopted the name Temple B'nai Darom. The building is a contributing property to the historic district. It is among the oldest synagogue buildings still standing in the United States. [2]

A synagogue is a Jewish house of worship. Synagogues have a place for prayer and may also have rooms for study, a social hall, and offices. Some have a separate room for Torah study, called the בית מדרש‎ beth midrash, lit. "house of study".

The Tuscawilla Park Historic District is a historic district in Ocala, Florida. It is bounded by Northeast 4th Street, Sanchez Avenue, 2nd Street, Tuscawilla Avenue, and Watula Street. It encompasses approximately 20 acres, and contains 37 historic buildings. On March 30, 1988, it was added to the National Register of Historic Places.

The Isaac M. Wise Temple is the historic synagogue erected for Rabbi Isaac Mayer Wise and his congregation in Cincinnati, Ohio. Wise was among the founders of American Reform Judaism. The temple building was designed by prominent Cincinnati architect James Keys Wilson. Its design was inspired by the Alhambra at Granada.

Ohab Zedek, sometimes abbreviated as OZ, is an Orthodox Jewish synagogue in Manhattan, New York City noted for its lively, youthful congregation. Founded in 1873, it moved to its current location on West 95th Street in 1926. The current clergy are: Rabbi Allen Schwartz, Senior Rabbi.

The B'nai Abraham congregation in Brenham, Texas, was organized in 1885.

The history of the Jews in Omaha, Nebraska, goes back to the mid-1850s.

B'nai Israel is a Modern Orthodox synagogue located in the historic Jonestown neighborhood, near downtown and the Inner Harbor of Baltimore. The synagogue is one of the oldest synagogue buildings still standing in the United States.

Temple Covenant of Peace is a Reform synagogue in Easton, Pennsylvania. Founded in 1839, it is one of the oldest synagogues in the United States. The Temple is currently in the process of merging with the B'nai Abraham synagogue.

Congregation Beth Israel is a Jewish congregation located at 10460 North 56th Street in Scottsdale, Arizona. Formally incorporated in 1920, it affiliated with the Reform Judaism in 1935. 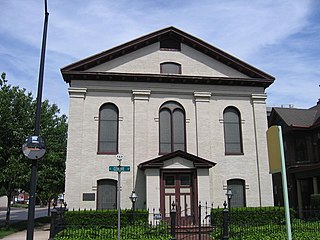 Congregation B'nai Israel is the oldest Jewish congregation in Sacramento, California. The congregation, which began as an Orthodox community, traces its history back to the California Gold Rush of 1849, when Jewish settlers gathered to observe the High Holy days. The congregation purchased its first building at 7th and L streets on September 2, 1852, making it the first congregationally owned synagogue west of the Mississippi River.

B'nai Jeshurun is a synagogue in the Upper West Side of Manhattan, New York City.

Old Ohavi Zedek Synagogue is a historic synagogue building at Archibald and Hyde Streets in Burlington, Vermont. It was built in 1885 for Ohavi Zedek, Vermont's oldest Jewish congregation, and is currently occupied by Congregation Ahavath Gerim. The building, a distinctive vernacular interpretation of the Gothic Revival, was listed on the National Register of Historic Places in 1978.

Temple Israel is a Reform Jewish congregation located at 2004 East 22nd Place in Tulsa, Oklahoma. Founded in 1914, the synagogue affiliated with the Union for Reform Judaism in 1915, and constructed its first building on the corner of 14th and Cheyenne Streets in 1919. Early rabbis included Jacob Menkes, Charles Latz, Samuel Kaplan, Jacob Krohngold, and Benjamin Kelsen.

B'nai Jacob Synagogue is a Conservative congregation in Ottumwa, Iowa. Established in 1898, it was originally Orthodox. It constructed its current synagogue building in 1915, and joined the Conservative movement in the 1950s. The building was added to the National Register of Historic Places in 2004. 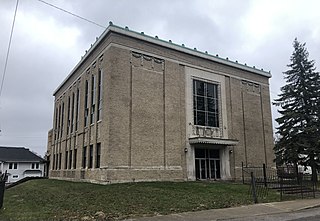 Beth-El Zedeck Temple, originally known as Beth-El Temple, is a historic synagogue located in the Mapleton-Fall Creek neighborhood in Indianapolis, Indiana. The building was completed in 1924, and was originally home to Congregation Beth-El before merging with the Ohev Zedeck congregation in 1928. It is the oldest remaining synagogue structure in Indianapolis.