The Morgan Horse Farm is a historic horse breeding facility at 74 Battell Drive (off Morgan Horse Farm Road) in Weybridge, Vermont. Since 1907, it has been an official breeding site for the Morgan horse, one of the first American-bred horse breeds, and Vermont's official state animal. The breeding program was established in Burlington in 1905, and moved to this site in 1907 by the United States Department of Agriculture, and is now run by the University of Vermont. The farm is listed on the National Register of Historic Places. [1]

The Morgan Horse Farm is located on the east side of Morgan Horse Farm Road, on Weybridge's east side, on 127 acres (51 ha) overlooking Otter Creek. A broad lawn separates the farm's main cluster of buildings from the road, prominently featuring a statue of Figure the founding sire of the Morgan horse breed. The property includes a 19th-century mansard-roofed barn with Second Empire styling, and a historic brick Greek Revival house, built for one of the early farmers of the land. [2]

The Morgan horse breed traces its origins to the activities of Justin Morgan, who purchased Figure in the 1790s. The breed saw widespread expansion and use throughout the United States in the 19th century, spawning several other important breeds. In 1905, the United States Department of Agriculture established a breeding program on the campus of the University of Vermont in Burlington. Two years later, it moved to this property, donated by Joseph Battell, founder of the American Morgan Register. The facilities were turned over to the University of Vermont in 1951. [2] The site is a tourist attraction for aficionados of Morgan horses, and continues to be a leader in the development of the breed. 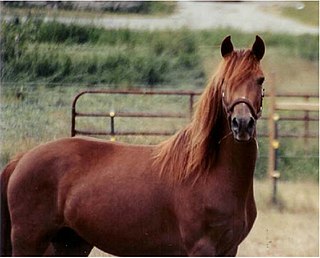 The Morgan horse is one of the earliest horse breeds developed in the United States. Tracing back to the foundation sire Figure, later named Justin Morgan after his best-known owner, Morgans served many roles in 19th-century American history, being used as coach horses and for harness racing, as general riding animals, and as cavalry horses during the American Civil War on both sides of the conflict. Morgans have influenced other major American breeds, including the American Quarter Horse, Tennessee Walking Horse and the Standardbred. During the 19th and 20th centuries, they were exported to other countries, including England, where a Morgan stallion influenced the breeding of the Hackney horse. In 1907, the US Department of Agriculture established the US Morgan Horse Farm near Middlebury, Vermont for the purpose of perpetuating and improving the Morgan breed; the farm was later transferred to the University of Vermont.The first breed registry was established in 1909, and since then many organizations in the US, Europe and Oceania have developed. There were estimated to be over 175,000 Morgan horses worldwide in 2005.

Justin Morgan was a U.S. horse breeder and composer.

Deane Chandler Davis was an American attorney and insurance executive from Vermont. Long active in Republican politics, he is most notable for his service as the 74th Governor of Vermont from 1969 to 1973.

Joseph Battell was a publisher and philanthropist from Middlebury, Vermont. Battell is credited with preserving Vermont forest land including the land for Camel's Hump State Park. The Joseph Battell Wilderness in the Green Mountain National Forest bears his name. 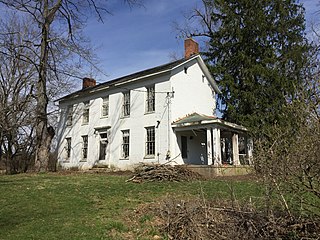 Austin–Magie Farm and Mill District is a registered historic district near Oxford, Ohio, listed in the National Register on December 21, 1982. It contains 5 contributing buildings.

Figure was a small bay stallion owned by Justin Morgan; he became the foundation sire of the Morgan horse breed.

Coker Experimental Farms, also known as Coker Pedigreed Seed Company, is a National Historic Landmark agricultural site at 1257 South Fourth Street in Hartsville, South Carolina, USA. Now a museum property, the property was where David R. Coker performed critical breeding experiments to improve strains of cotton and other crops grown throughout the American South. Coker was a major force in the development of agricultural extension services in the South in the early decades of the 20th century. What remains of his farm was declared a National Historic Landmark in 1964.

Glen Dale Farm is a historic farm property at 1455 Cider Mill Road in Cornwall, Vermont. Its 3.5-acre (1.4 ha) property, which includes five contributing buildings, was listed as Glen Dale on the National Register of Historic Places in 2002. Farmed since the 1770s, the farm achieved prominence in the second half of the 19th century as one of the nation's top breeding sites of merino sheep.

The following is a timeline of the history of the city of Burlington, Vermont, USA 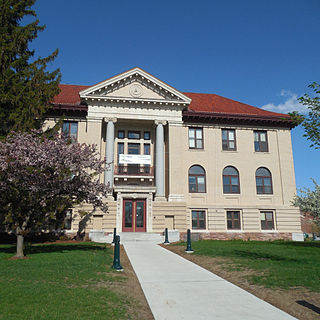 Morrill Hall is a campus building of the University of Vermont (UVM), which is located on the southeast corner of the "University Green" in Burlington, Vermont. The building was named after U.S. Senator, Justin Smith Morrill who authored the Morrill Land-Grant Acts of 1862 and 1890, which created the American Land-Grant universities and colleges. Senator Morrill also served as a trustee of the university from 1865 until 1898. The building was constructed during 1906-07 to serve as the home of the UVM Agriculture Department and the Agricultural Experiment Station. It was added to National Register of Historic Places as part of University Green Historic District on April 14, 1975. As of 2015, the building continues to house the College of Agriculture and Life Sciences and the UVM Agricultural Extension Service. 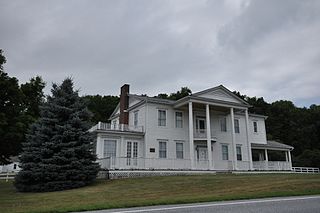 Mountain View Stock Farm, now known as Tylord Farm, is a historic estate farm on Vermont Route 22A in Benson, Vermont. Developed in the early 20th century around a late 18th-century farmhouse, the farm was renowned in the state for its breeding of Kentucky saddle horses and Chester White hogs. The farm complex also has architecturally distinctive Colonial Revival styling. The property was listed on the National Register of Historic Places in 1989.

The Ezekiel Emerson Farm, also known as Apple Hill Farm, is a historic farm property at 936 Brandon Mountain Road in Rochester, Vermont. Occupying 38 acres (15 ha), the farm includes a mid-19th century bank barn and a c. 1920-1940 milk barn that are both well-preserved examples of period agricultural buildings. The otherwise undistinguished house includes a fine example of a Late Victorian porch. The property was listed on the National Register of Historic Places in 2001.

The Wilcox-Cutts House is a historic house on Vermont Route 22A in Orwell, Vermont, USA. Its oldest portions date to 1789, but it is regarded as one of Vermont's finest examples of late Greek Revival architecture, the result of a major transformation in 1843. The house and accompanying farmland, also significant in the development of Morgan horse breeding in the state, was listed on the National Register of Historic Places in 1974.

The New Haven-Weybridge Rattling Bridge is a historic bridge spanning Otter Creek between the Vermont towns of Weybridge and New Haven. It connects Town Highway 7 in New Haven with Town Highway 11 in Weybridge. Built in 1908 by the American Bridge Company, it is a well-preserved example of a rivet-connected lattice truss bridge. It was listed on the National Register of Historic Places as Bridge 26 in 2006. 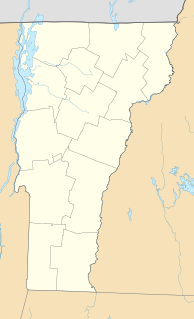 The Proctor Maple Research Center is an agricultural research center of the University of Vermont specializing in the study of sugar maples, particularly with respect to the production of sap for use in maple syrup. It is the only facility of this type in the United States. Its facilities are located on Harvey Road in Underhill, Vermont, on a rural property previously known as the Harvey Farm, given to the state in 1946 by Governor of Vermont Mortimer Proctor. The center's early facilities and century-old sugar bush are listed on the National Register of Historic Places.

The Darling Estate Historic Estate encompasses an historic country estate of more than 2,000 acres (810 ha) on Darling Hill Road, straddling the town line between Burke and Lyndon, Vermont, USA. Built in the early 1900s for Elmer Darling, a locally-born New York hotelier, it was one of Vermont's largest such estates, featuring Burklyn Hall, one of its most opulent Colonial Revival houses, as well as numerous 19th-century farm properties. It was listed on the National Register of Historic Places in 2011.

The M.S. Whitcomb Farm is a historic farm property on United States Route 2 in Richmond, Vermont. Established in the 1850s as a horse farm, it has seen agricultural use in some form since then. Its most distinguishing feature is a large bank barn with a monitor roof, built in 1901. The property, now 170 acres (69 ha), was listed on the National Register of Historic Places in 1993.

Clinton Smith was an American architect. He designed many buildings in Middlebury and around Vermont.