A zombie film is a film genre. Zombies are fictional creatures usually portrayed as reanimated corpses or virally infected human beings. They are commonly portrayed as cannibalistic in nature. While zombie films generally fall into the horror genre, some cross over into other genres, such as action, comedy, science fiction, thriller, or romance. Distinct subgenres have evolved, such as the "zombie comedy" or the "zombie apocalypse". Zombies are distinct from ghosts, ghouls, mummies, Frankenstein's monsters or vampires, so this list does not include films devoted to these types of undead.

Inspired by the zombie of Haitian folklore, the modern zombie emerged in popular culture during the latter half of the twentieth century, with George A. Romero's seminal film Night of the Living Dead (1968). [4] The film received a sequel, Dawn of the Dead (1978), which was the most commercially successful zombie film at the time. It received another sequel Day of the Dead (1985), and inspired numerous works such as Zombi 2 (1979) and Return of the Living Dead (1985). However, zombie films that followed in the 1980s and 1990s were not as commercially successful as Dawn of the Dead in the late 1970s. [5]

In the 1980s Hong Kong cinema, the Chinese jiangshi, a zombie-like creature dating back to Qing dynasty era jiangshi fiction of the 18th and 19th centuries, was featured in a wave of jiangshi films, popularised by Mr. Vampire (1985). Hong Kong jiangshi films became popular in the Far East during the mid-1980s to early 1990s. Another American zombie film was produced in 1988, The Serpent and the Rainbow (film).

A zombie revival later began in the Far East during the late 1990s, inspired by the 1996 Japanese zombie video games Resident Evil and The House of the Dead , which led to a wave of low-budget Asian zombie films, such as the Hong Kong zombie comedy film Bio Zombie (1998) and Japanese zombie-action film Versus (2000). [6] The zombie film revival later went global, as the worldwide success of zombie games such as Resident Evil and The House of the Dead inspired a new wave of Western zombie films in the early 2000s, [6] including the British film 28 Days Later (2002), the sequel 28 Weeks Later, the Resident Evil film series, a 2004 Dawn of the Dead remake, and the British parody movie Shaun of the Dead (2004). [7] [8] [9] The success of these films led to the zombie genre reaching a new peak of commercial success not seen since the 1970s. [5]

In the late 2010s, zombie films began declining in the Western world. [9] In Japan, on the other hand, the low-budget Japanese zombie comedy One Cut of the Dead (2017) became a sleeper hit, making box office history by earning over a thousand times its budget. [12]

Characteristics of zombies vary from film to film. Each filmmaker gives his or her zombies a unique set of qualities for the universe of that film. While zombies are often portrayed as slow-moving, such as in Night of the Living Dead , other films such as World War Z depict fast-moving zombies that can run.

Zombies also have different weaknesses in different films. In most films, zombies can only be killed by destroying the brain, often by gunshot to the head. However, in Night of the Living Dead , the zombies are also repelled by fire.

A few films also portray zombies as sentient beings. Warm Bodies is a zombie romantic comedy about zombies who are still conscious in their bodies and wish they could be alive again. In TheGirl with All the Gifts, there are human-zombie hybrid children that act like normal children except when they’re hungry. 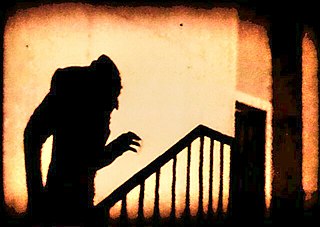 A horror film is one that seeks to elicit fear or disgust in its audience for entertainment purposes. Horror films additionally aim to evoke viewers' nightmares, revulsions and terror of the unknown or the macabre. Initially inspired by literature from authors such as Edgar Allan Poe, Bram Stoker, and Mary Shelley, horror has existed as a film genre for more than a century. Horror may also overlap with the fantasy, supernatural fiction, and thriller genres.

28 Days Later is a 2002 British post-apocalyptic horror drama film directed by Danny Boyle, written by Alex Garland, and starring Cillian Murphy, Naomie Harris, Christopher Eccleston, Megan Burns and Brendan Gleeson. The plot depicts the breakdown of society following the accidental release of a highly contagious virus and focuses upon the struggle of four survivors to cope with the destruction of the life they once knew while evading those infected by the virus.

George Andrew Romero was an American filmmaker, writer, and editor. His Night of the Living Dead series of films about zombie apocalypse began with the 1968 film of the same name, and is often considered a progenitor of the fictional zombie of modern culture. Other films in the series include Dawn of the Dead (1978) and Day of the Dead (1985). Aside from this series, his works include The Crazies (1973), Martin (1978), Knightriders (1981), Creepshow (1982), Monkey Shines (1988), The Dark Half (1993), and Bruiser (2000). He also created and executive-produced the television series Tales from the Darkside, from 1983 to 1988.

Mr. Vampire is a 1985 Hong Kong comedy horror film directed by Ricky Lau and produced by Sammo Hung. The film's box office success led to the creation of a Mr. Vampire franchise, with the release of four sequels directed by Ricky Lau from 1986 to 1992, and subsequent similarly themed films with different directors released between 1987 and 1992, with Lam Ching-ying as the lead for the majority of them. The vampire of the film is based on the jiangshi, the hopping corpses of Chinese folklore. The film was released under the Chinese title 暫時停止呼吸 in Taiwan. The film was the breakthrough success of the jiangshi genre, a trend popular in Hong Kong during the 1980s, and established many of the genre's recognisable tropes.

Living Dead is a blanket term for the loosely connected horror franchise that originated from the 1968 film Night of the Living Dead. The film, written by George A. Romero and John A. Russo, primarily focuses on a group of people gathering at a farmhouse to survive from an onslaught of zombies in rural Pennsylvania. It is known to have inspired the modern interpretation of zombies as reanimated human corpses that feast on the flesh and/or brains of the living.

The House of the Dead is a horror-themed rail shooter video game franchise created by Sega in 1996. Originally released on arcade, it utilizes a light gun on the platform, but can be played with standard controllers on consoles and a mouse or keyboard on home computers. For the PlayStation Network releases of III and 4, they can also be played using the PlayStation Move controller.

The zombie comedy, often called zom com or zomedy, is a film genre that aims to blend zombie horror motifs with slapstick comedy as well as dark comedy. 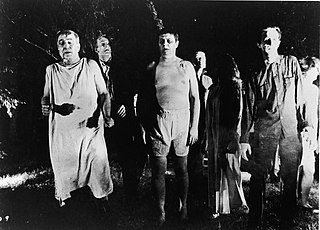 A zombie is a mythological undead corporeal revenant created through the reanimation of a corpse. Zombies are most commonly found in horror and fantasy genre works. The term comes from Haitian folklore, in which a zombie is a dead body reanimated through various methods, most commonly magic like voodoo. Modern media depictions of the reanimation of the dead often do not involve magic but rather science fictional methods such as carriers, radiation, mental diseases, vectors, pathogens, parasites, scientific accidents, etc.

Zombie apocalypse is a genre of fiction in which civilization collapses due to overwhelming swarms of zombies. Typically only a few individuals or small bands of survivors are left living.

Messiah of Evil is a 1973 American supernatural horror film co-written, co-produced, and co-directed by Willard Huyck and Gloria Katz, and starring Marianna Hill, Michael Greer, Anitra Ford, Royal Dano, and Elisha Cook Jr.. Its plot follows a woman who travels to a remote coastal town in California to find her missing artist father; upon arrival, she finds herself in the midst of a series of bizarre incidents.

The film Dawn of the Dead influenced popular culture in a variety of media forms and genres.

Night of the Day of the Dawn of the Son of the Bride of the Return of the Revenge of the Terror of the Attack of the Evil, Mutant, Alien, Flesh Eating, Hellbound, Zombified Living Dead is a series of parody films written by James Riffel as spoofs adding his own scripts on already known films and television footage after deleting the original scripts from the films.

Chinese horror is a term given to Chinese, Hong Kong, and Taiwanese films as part of the stream of Asian horror films. Like Korean and Japanese as well as other Asian horror films many focus on ghosts, supernatural environments, and suffering. Perhaps one of the best films for C-horror is The Eye directed by the Pang brothers which was later remade.

Jiangshi fiction or goeng-si fiction in Cantonese, is a literary and cinematic genre of horror based on the jiangshi of Chinese folklore, a reanimated corpse controlled by Taoist priests that resembles the zombies and vampires of Western fiction. The genre first appeared in the literature of the Qing Dynasty and the jiangshi film is a staple of the modern Hong Kong film industry. Hong Kong jiangshi films like Mr. Vampire and Encounters of the Spooky Kind follow a formula of mixing horror with comedy and kung fu.

A horror game is a video game genre centered on horror fiction and typically designed to scare the player. Unlike most other video game genres, which are classified by their gameplay, horror games are nearly always based on narrative or visual presentation, and use a variety of gameplay types.

Zombies (ゾンビ) are recurring antagonists within the fictional universe of Japanese video game company Capcom's multimedia franchise Resident Evil, known in Japan as Biohazard. First appearing in the 1996 video game Resident Evil, they are mutated creatures with cannibalistic urges and severe epidermal necrosis, and their origins are explained from a scientific perspective. In contrast to zombies in other horror and fantasy genre works where they are traditionally presented as corporeal revenants with mythological and supernatural origins, zombies in the Resident Evil series are usually created through the use of biological weaponry, genetic manipulation and/or parasitic symbiosis. Subsequent sequels have featured other types of zombie as well as related creatures which are presented as more agile, vicious, and intelligent antagonists.