For the list of governors of the states of Brazil, see Category:Lists of Brazilian state governors.

Choro, also popularly called chorinho, is an instrumental Brazilian popular music genre which originated in 19th century Rio de Janeiro. Despite its name, the music often has a fast and happy rhythm. It is characterized by virtuosity, improvisation and subtle modulations, and is full of syncopation and counterpoint. Choro is considered the first characteristically Brazilian genre of urban popular music. The serenaders who play choros are known as chorões. 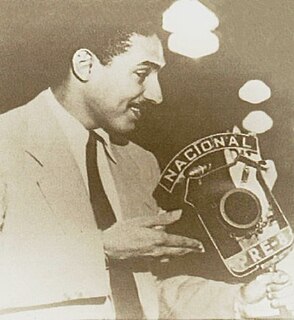 Cacilda Campos Borges Barbosa was a Brazilian pianist, conductor and composer. She was one of the pioneers of electronic music in Brazil.

Caio Fernando Loureiro de Abreu, best known as Caio Fernando Abreu, is one of the most influential and original Brazilian writers of the 1970s and 1980s. Caio F., as he habitually signed his letters, was born in Santiago do Boqueirão in the state of Rio Grande do Sul in 1948, and died in Porto Alegre in 1996.

Emilinha Borba was a Brazilian singer and actress. She was named "Rainha do Rádio", "Queen of the Radio" in 1953. Borba endured for 30 years as a popular Brazilian radio singer and was noted for rumbas and sambas.

Abreu is a Galician-Portuguese surname. The surname is particularly prevalent among those of Portuguese and Sephardic Jewish descent.

Oscar Lorenzo Fernández was a Brazilian composer of Spanish descent. He was born and died in Rio de Janeiro.

Maids is a 2001 Brazilian film directed by Fernando Meirelles and Nando Olival. It is based on the play of the same name by Renata Melo, and has received multiple awards and nominations.

Jaime Ovalle or Jayme Ovalle was a Brazilian composer and poet.

Luz del Fuego was a Brazilian feminist, ballerina, naturist, and striptease artist who performed with live snakes. Comfortable with nudity, she wrapped pythons around her body and became famous in her time.

Caio is a Portuguese masculine given name derived from the Latin name Gaius. People with that name include: