Last updated July 29, 2022
Head of state and head of government of Brazil

The president of Brazil (Portuguese : Presidente do Brasil), officially the president of the Federative Republic of Brazil (Portuguese : Presidente da República Federativa do Brasil) or simply the President of the Republic, is the head of state and head of government of Brazil. The president leads the executive branch of the federal government and is the commander-in-chief of the Brazilian Armed Forces. The presidential system was established in 1889, upon the proclamation of the republic in a military coup d'état against Emperor Pedro II. Since then, Brazil has had six constitutions, three dictatorships, and three democratic periods. During the democratic periods, voting has always been compulsory. The Constitution of Brazil, along with several constitutional amendments, establishes the requirements, powers, and responsibilities of the president, their term of office and the method of election. [3]

Jair Bolsonaro is the 38th and current president. He was sworn in on 1 January 2019 following the 2018 presidential election. [4]

As a republic with a presidential executive, Brazil grants significant powers to the president, who effectively controls the executive branch, represents the country abroad, and appoints the cabinet and, with the approval of the Senate, the judges for the Supreme Federal Court. The president is also the commander-in-chief of the armed forces.

Presidents in Brazil have significant lawmaking powers, exercised either by proposing laws to the National Congress or by using Medidas Provisórias (provisional measures), an instrument with the force of law that the president can enact in cases of urgency and necessity except to make changes to some areas of law (provisional measures cannot be used to change criminal law or electoral law). A provisional measure comes into effect immediately, before Congress votes on it, and remains in force for up to 60 days unless Congress votes to rescind it. The 60-day period can be extended once, up to 120 days. If Congress, on the other hand, votes to approve the provisional measure, it becomes an actual law, with changes decided by the legislative branch. The provisional measure expires at the end of the 60-day period (or the 120-day, in the case of extension), or sooner, if rejected by one of the Houses of Congress. [5]

Article 84 of the current Federal Constitution, determines that the president has the power to

The Constitution of Brazil requires that a president be a native-born citizen of Brazil, at least 35 years of age, a resident of Brazil, in full exercise of their electoral rights, a registered voter, and a member of a political party (write-in or independent candidates are prohibited). [6]

The president of Brazil serves for a term of four years, [7] and may be re-elected for a single consecutive term. [8] This two-term limit, however, is not for life—a former president who has served for two consecutive terms may run for the presidency again after at least one term has elapsed. [9]

Running for other offices

A sitting president (or governor or mayor) who wishes to run for a different office, regardless of the intended jurisdiction or branch of government, must resign from office at least six months before election day. [10]

The possibility of reelection was established by the 16th Amendment to the Constitution, in 1997. Before that, presidents had been barred from immediate reelection for all of Brazil's republican history, with the single exception of the latter half of the Vargas Era, from 1937 to 1945. The office was limited to men until the 1937 Constitution.

Compensation and privileges of office

As of 2015, [12] the president receives a monthly salary of R$30,934.70, [2] along with an undisclosed expense account to cover travel, goods and services while in office. [13] Given that in Brazil all private and public sector employees and civil servants receive an additional compensation equivalent to one monthly salary after a year of work (this compensation is known as the thirteenth salary), the president receives 13 payments per year, resulting in an annual salary of R$402,151.10.

The Palácio do Planalto in Brasília is the official workplace of the president and the Palácio da Alvorada their official residence. The president is entitled to use its staff and facilities. [14] [15] The Residência Oficial do Torto , popularly known as Granja do Torto, is a ranch located on the outskirts of the capital and is used as a country retreat by the president. [16] The Palácio Rio Negro in Petrópolis, Rio de Janeiro, is a summer retreat of the president, although used rarely. [17]

In addition, the presidency of the republic also maintains the Jaburu Palace in Brasília for use by the vice president of the Republic as his or her official residence.

In the 2000s, the federal government decided to establish Regional Offices of the Presidency of the Republic in certain key Brazilian cities. Those regional offices are not presidential residences, but they are fully staffed offices ready to receive the president and his ministers at any time, and they function as a presidential workplace when the president is in those cities. The first regional office of the presidency was established in the city of São Paulo, and is located at the Banco do Brasil building at the Paulista Avenue; the building also houses Banco do Brasil's regional headquarters in São Paulo. The presidency of the republic also maintains regional offices in Porto Alegre and in Belo Horizonte.

The president may be removed from office [25] using one of two procedures. In either case, two-thirds of the Chamber of Deputies must accept charges against the officeholder (impeachment); and if the Senate accepts the investigation, the president is suspended from exercising the functions of office for up to 180 days. In the case of "common criminal offenses", a trial then takes place at the Supreme Federal Court. In the case of "crimes of malversation", which must fall into one of seven broad areas and which is defined in more detail in law, a trial takes place at the Federal Senate. During the trial, the vice president exercises executive power. If the trial does not result in a conviction within 180 days, the president resumes office; a conviction results in removal from office and succession by the vice president. The seven areas are: [25]

The following privileges are guaranteed to former presidents by law:

The national flag of Brazil, is a blue disc depicting a starry sky spanned by a curved band inscribed with the national motto "Ordem e Progresso", within a yellow rhombus, on a green field. It was officially adopted on November 19, 1889 — four days after the Proclamation of the Republic, to replace the flag of the Empire of Brazil. The concept was the work of Raimundo Teixeira Mendes, with the collaboration of Miguel Lemos, Manuel Pereira Reis and Décio Villares.

Manuel Deodoro da Fonseca was a Brazilian politician and military officer who served as the first president of Brazil. He was born in Alagoas in a military family, followed a military career, and became a national figure. Fonseca took office as provisional president after heading a military coup that deposed Emperor Pedro II and established the First Brazilian Republic in 1889, disestablishing the Empire. After his election in 1891, he stepped down the same year under great political pressure when he dissolved the National Congress. He died less than a year later. 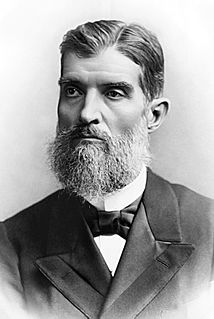 Prudente José de Morais e Barros was a Brazilian lawyer and politician who was the third president of Brazil. He is notable as the first civilian president of the country, the first to be elected by direct popular ballot under the permanent provisions of Brazil's 1891 Constitution, and the first to serve his term in its entirety. His presidency, which lasted from 15 November 1894 until 14 November 1898, was marked by the War of Canudos, a peasant revolt in the northeast of the country that was crushed by the Brazilian Army. He also had to face a break in diplomatic relations with Portugal that was successfully mediated by Queen Victoria of the United Kingdom. 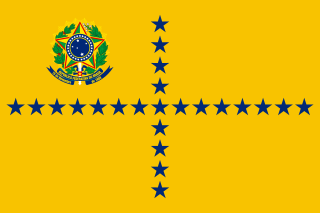 The Palácio do Planalto in Brasília is the official workplace of the president of Brazil. The building was designed by architect Oscar Niemeyer in 1958 and inaugurated on April 21, 1960. It has been the workplace of every Brazilian president since Juscelino Kubitschek. It is located at the Praça dos Três Poderes, to the east of the National Congress of Brazil and across from the Supreme Federal Court.

The presidential line of succession defines who may become or act as President of the Federative Republic of Brazil upon the death, resignation, incapacity or removal from office of the elected president, and also when the president is out of the country or is suspended due to impeachment proceedings. 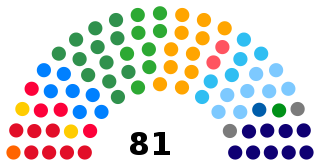 The Federal Senate is the upper house of the National Congress of Brazil. When created under the Brazilian Empire in 1824, it was based on the British House of Lords, but since the Proclamation of the Republic in 1889 the Federal Senate has resembled the United States Senate. The Federal Senate has 81 seats, three each for the Federal District and the 26 states. Senators sit for eight years, and elections are staggered so that either a third or two-thirds are up for election every four years. 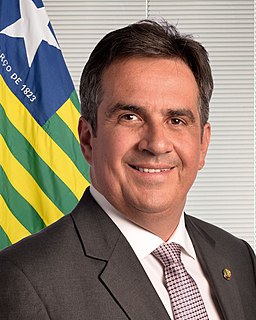 The Argentina–Brazil relationship is both close and historical, and encompasses the economy, trade, culture, education, and tourism. From war and rivalry to friendship and alliance, this complex relationship has spanned more than two centuries. The countries also share a system of government, a federal republic with a presidential system. 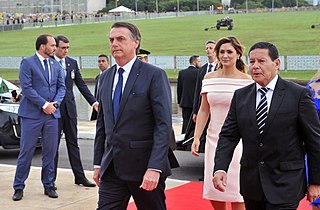 The inauguration of the President of Brazil is composed of several ceremonies that happen in the same day. Through democratic elections or coups, resignations and deaths, presidential inaugurations have been important events in Brazilian history. 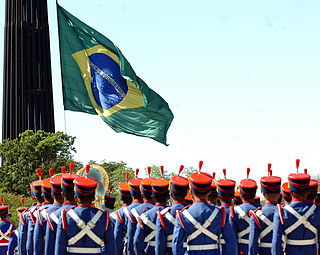 Michel Miguel Elias Temer Lulia is a Brazilian politician, lawyer and writer who served as the 37th president of Brazil from 31 August 2016 to 31 December 2018. He took office after the impeachment and removal from office of his predecessor Dilma Rousseff. He had been the 24th vice president since 2011 and acting president since 12 May 2016, when Rousseff's powers and duties were suspended pending an impeachment trial. At the age of 75, he is the oldest person to have taken the office. 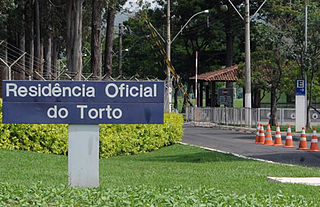 The Granja do Torto is an official residence maintained by the Presidency of Brazil. It is a property with ranch-style features, located on the outskirts of the capital city of Brasília. It is used mainly as a weekend retreat by the president.

The 1993 Brazilian constitutional referendum was held on 21 April 1993 to determine the form of government of the country. After the re-democratization of Brazil, an article in the new Constitution determined the holding of a referendum for voters to decide if the country should remain a republic or become a monarchy again, and if the system of government should be presidential or parliamentary. Voting for "monarchy" and "presidentialism" in tandem would annul one's vote. 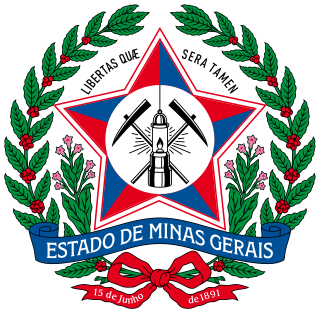 The Legislative Assembly of Minas Gerais is the state legislature of Brazil's Minas Gerais state. It consists of 77 state deputies elected by proportional representation and is based in Belo Horizonte, the state capital. The Assembly has been based at the Palácio da Inconfidência since the building's 1972 opening; it was made a national heritage site in 2009. 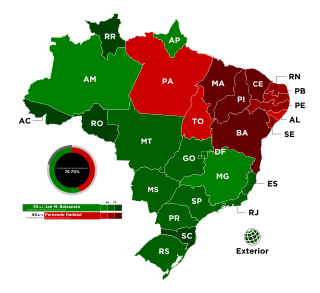 General elections were held in Brazil on 7 October 2018 to elect the president, National Congress and state governors. As no candidate in the presidential election received more than 50% of the vote in the first round, a runoff round was held on 28 October. 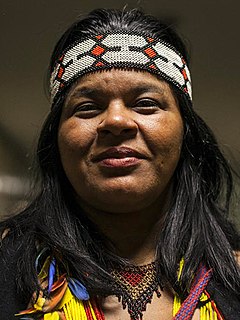 Sônia Bone de Souza Silva Santos, usually known as Sônia Guajajara, is a Brazilian indigenous activist, environmentalist, and politician. A member of the leftist Socialism and Liberty Party (PSOL), she was initially a candidate for President of Brazil in the 2018 election, before being chosen as the vice presidential running mate of nominee Guilherme Boulos. This made her the first indigenous person to run for a federal executive position in Brazil. In 2022, Sônia was named one of the 100 most influential people in the world by Time.

Wikimedia Commons has media related to Presidents of Brazil .
Portals: