The 2012 Indian Federation Cup was the 34th season of the top knock-out competition in India. The qualifiers started in August while the Final Round took place from 19 September 2012 to 30 September 2012. [1] [2]

Salgaocar were the defending champions, having beaten East Bengal 3–1 in the 2011 Final.

DD Sports Friday agreed to telecast live the semifinals and final of the tournament. [3]

The cup was eventually won by East Bengal after they defeated Dempo in the final on 30 September 2012. [4]

The calendar for the 2012 Indian Federation Cup, as announced by the All India Football Federation:

All of the teams entering the competition that are not members of the I-League and have to compete in the qualifying rounds.

The I-League, formerly known as National Football League, is one of the premier football leagues in India together with Indian Super League.. For sponsorship reasons, the league is officially known as the Hero I-League. It is currently contested by 11 clubs across the country.

Ranti Martins Soleye is a Nigerian professional footballer who plays as a striker, currently playing for SGFC Eagles Maryland. Martins is one of the best foreign players to play in the Indian I-League, with a record 214 goals across all seasons. He set a single-season record for goals in the I-League by scoring 32 goals during the 2011–12 season for Dempo.

The 2010–11 I-League is the fourth season of the I-League, the highest football league competition in India. It ran from 3 December 2010 to May 2011. Dempo are the defending champions. On May 30, 2011 Salgaocar SC won the title by beating JCT FC 2–0 in the final match of the season.

The 2011 Indian Federation Cup was the 33rd season of the knock-out competition. On 13 August 2011 the AIFF announced that 21 clubs had been accepted to the tournament.

The 2011–12 I-League is the fifth season of the I-League, the topmost level of the Indian football pyramid. The season began in October 2011 and ended in May 2012. Salgaocar are the defending champions, having won their maiden title in the previous season. 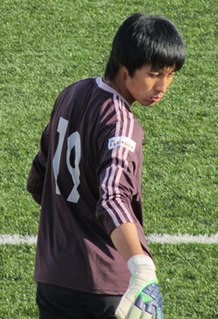 Soram Poirei Anganba Meitei is an Indian professional footballer who plays as a goalkeeper for club NorthEast United FC from Indian Super League.

The 2012 I-League U20 was the second season of the Indian I-League U20 competition. The season ran alongside the closing stages of the 2011–12 I-League season. The AIFF development team, Pailan Arrows, did not field their team in the competition as they were already an u21 team in the I-League. The preliminary phase of the 2012 U20 league was held played in three different cities, Kalyani, Mumbai and within the state of Goa. The final round of the competition was held in Kalyani with Pune F.C. Academy coming out as winners.

The 2012–13 East Bengal F.C. season was the club's 93rd season since their formation in 1920 and their sixteenth season ever in the I-League which is India's top football league.

The 2012–13 Pailan Arrows season was the club's third season since their formation in 2010 and their second under the name Pailan Arrows. They finished 12th in the I-League.

The 2012–13 United Sikkim F.C. season will be the club's third season since their formation in 2008 and their first season ever in the I-League which is India's top football league.

The 2014–15 Indian Federation Cup, also known as the Hero Federation Cup for sponsorship reasons, was the 36th edition of the Federation Cup, the main national football cup competition in India. Ten of the eleven I-League clubs participated in the tournament the season with Bharat FC being the excluded club.

The 2015–16 Indian Federation Cup, also known as 2015–16 Hero Federation Cup due to sponsorship reasons was the 37th edition of the Federation Cup, the main national football cup competition in India. The tournament was held from 30 April 2016 to 21 May 2016. Top 8 teams from 2015–16 I-League participated in the tournament. Ten Sports Network, the Official Broadcaster of Hero Federation Cup 2016 will telecast only the Semi-finals and the Final match while Knockout stage matches will be streamed live on I-league website.